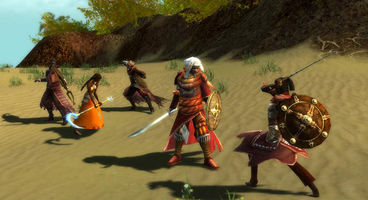 While there's no new content in the works for the original, ArenaNet have been tooling up automated support for it so it could 'last forever' for those who want it.

"The game itself was so efficient on the server side in terms of the resources, like, it runs on a fraction of the hardware that we need for running Guild Wars 2, so having that on the back-burner is nothing compared to GW2," lead content designer Mike Zadorojny told Eurogamer. "There's still a community there that's really passionate and really thriving in there, so we want to support them as best we can."

"We've been doing a lot of automation support so that the game itself could last forever, even without anybody really touching it," he added. "They're not necessarily making new content right now but there is a team that is monitoring if there are massive issues they're taken care of, and they're supporting them."

The original Guild Wars released a few expansions and sold over 6 million copies. Its tremendous success spurred NCSoft to pour invest into ArenaNet's far more ambitious vision for Guild Wars 2. The MMOs beginnings were humble indeed, with founder Mike O'Brien working with five other people in his apartment.