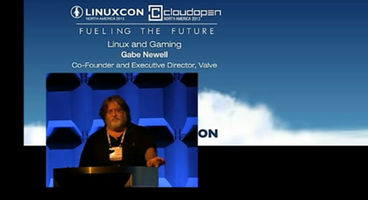 Gabe Newell during his presentation at LinuxCon in New Orleans has said Valve will be unveiling their plans for Linux-based hardware soon, as the studio boss cried Linux was the "future of gaming".

Next week they'll discuss their open source platform based on the OS, promising that "none of the proprietary closed platforms" will come close to their dreams.

Valve is pursing an unholy alliance between "mobile, the living room and the desktop," dooming mankind to never want to leave the couch again. Oh look a Steam sale!

"There are sets of issues to making sure whatever platform you have works well in a living room environment," he said. "There are thermal issues and sound issues, but there also a bunch of input issues. So the next step in our contribution to this is to release some work we've done on the hardware side."

"None of the proprietary closed platforms are going to be able to provide that grand unification between mobile, the living room and the desktop," he continued, possibly while wearing some sort of gaming Pope hat and robe.

"Next week we're going to be rolling out more information about how we get there and what are the hardware opportunities we see for bringing Linux into the living room, and potentially pointing further down the road to how we can get it even more unified in mobile." Valve has been working on hardware dubbed 'Steam Box' since March.

Valve has been very quiet on the hardware front and so it'll please many to know an announcement of their plans is much closer than we thought. I don't see how they've got the time for all this high minded tech fanciness, not when there's Half-Life 3 to be toiled on down in the pixel mines.