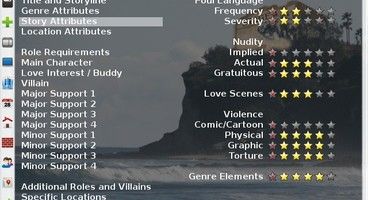 The game will remain true to its text-game roots - most of the game are menus and sliders. As with previous games, players will be treated to a film's opening credits with a score, though. The game will feature a cleaner, less DOS-like interface than it had since it debuted in 1994.

However, DeVuono will be releasing two separate expansion packs for the game. Pack 1 allows players to develop their own television shows, while Pack 2 will provide an extra challenge to the player as they must deal with people within your own studio who will keep the heat up on your film releases, hungry for your job.

There still will be no multiplayer, however, as DeVuono feels it's unworkable. "The whole point of a turn-based strategy game is to think, and ponder, and fuss, and plan. I don't want you to be rushed into a decision," he stated.