06 October 2014 | By Admin
Sign of the times; we now have a franchise recurring character who's only ever appeared in DLC content. That's Hurk, the burly American monkey enthusiast from Far Cry 3 who's also set to make an appearance in Far Cry 4.

His three exclusive missions are only available in the Limited Edition pre-order version of the game, which also adds 'The Impaler', a nasty harpoon gun. Both are on show in this new video from Ubisoft.

Personally I'm of the opinion that anyone who uses the phrase "awesome sauce" needs to be kicked into a river, but at least the harpoon gun looks like lots of fun. New Far Cry 4 animal, too! Turns out it's best not to stand in front of an annoyed rhino.

Hurk's missions in Far Cry 3 were a bit... lame, to be honest. Hopefully Ubisoft has upped its game for these ones. I mean, you can't promise hordes of monkeys and then just half-ass it guys. 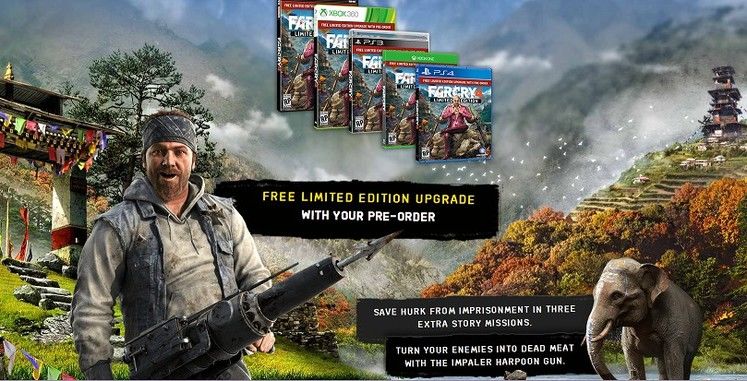