19 June 2014 | By Nick Horth
WildStar, the sci-fi MMO from developer Carbine, will be getting its first content update this July.

Titled Strain: Ultradrop, the update will see players battle a lethal virus that is starting to spread across the border planet of Nexus, mutating lifeforms into monstrous mutant abominations. It includes a huge new level-50 zone called Blighthaven.

Located in the new area are a few challenges for players to consider; Guardians of the Grove adds a tower defense quest, The Globellum is a kind of weird tentacle-filled platforming area, with players earning points for jumping through a series of rings, while The Nursery is a dangerous sub-zone with a 20-man raid area right near the end. Here's the official story blurb for the new update:

Born in the depths of a mysterious Eldan laboratory, the Strain is a virulent biological anomaly that has begun to spread across planet Nexus. With the power to change lifeforms into terrifying, mutated abominations, the Strain is an unimaginably dangerous threat.

All efforts to fight this nightmarish plague have met with failure. It is only a matter of time before it destroys all life on Nexus and beyond. Who created the Strain, and for what purpose? Does it have anything to do with what happened to the Eldan? And can the universe be saved, or is already too late? 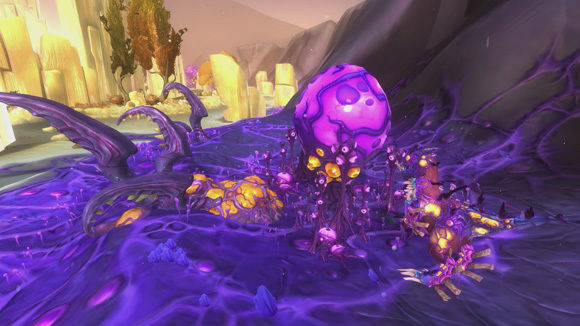