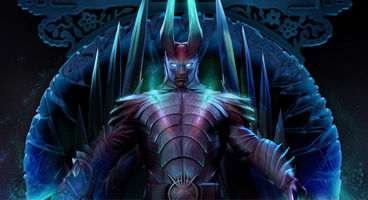 The original game's Terrorblade hero returns thanks to the New Bloom festival for DOTA 2. His demon marauding ways will be sowing terror on the battlefield with illusions, and the health swapping Sunder.

There's also a new mode called Random Ability Draft which pools everyone's abilities and then players take turns picking which one's they'd like. It's nothing but "pure bedlam!"

Full details about Terrorblade's return, the new Random Ability Draft madness and the big list of tweaks in update 6.80 are available on the official DOTA 2 blog.

"Terrorblade is the demon marauder—an outlaw hellion whom even other demons fear. He stole from the Demon Lords and for his crimes was taught this lesson: even Hell has a hell. He was incarcerated in Foulfell, a dark mirror of reality where demons are sentenced to gaze into twisted reflections of their own souls. But instead of suffering, Terrorblade mastered his reflected worst self and turned his terror loose upon creation."

Reflection - Create a double of your foe, which then attacks its original as it slows their movement.

Conjure Image - Summon forth an illusion of yourself to aid you in battle.

Metamorphosis - Embrace the darkness within, trading your melee attack for a ranged strike while granting additional damage.

Sunder - Sever the soul of an ally or enemy, exchanging your health for theirs.