02 March 2015 | By Nick Horth
A big new update for Heroes and Generals has popped up on Steam, adding, alongside new gear, playable characters, maps and gameplay improvements, a whole new faction in the form of Soviet Russia.

In total the 'Timoshenko' update adds over 1,000 new battlefields, 14 new vehicles and planes and over a dozen new weapons. Phew. In addition, all the currently available weapons have been rebalanced, and the previously rather confusing weapon mod system has been scrapped. Anyone who shelled out for mods will be refunded. Resource mechanics have also been tweaked to prevent odd spawn issues.

You'd imagine that the addition of a whole new faction will blow Heroes and Generals' overarching theatre of war wide open. Might we see another Axis side make an appearance in the near future to even up the balance? 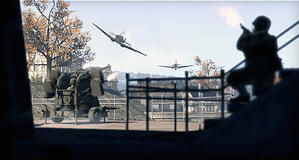