It's Monday and that means we're one step closer to Gamescom in August and the unveiling of Paradox Development Studio's secret-but-not-too-secret Project Augustus. Today also means it's time for Teaser #3.

The last tease told us that "Seven and Three are important numbers," but now we learn "there will be no stabbing of pigs." It seems porcine sacrifices are out of the question.

It should be noted that {b>Europa Universalis: Rome did feature pigs as sacrifices to raise stability. However Paradox has said that this is meant to be a new IP for the studio.

Technically speaking EU: Rome was a spin-off, and so a fully-fledged Roman era grand strategy with its own name would be new IP. Going with 'EU: Rome 2' would have brought it into conflict with Creative Assembly's turn-based and real-time strategy Total War: Rome 2. 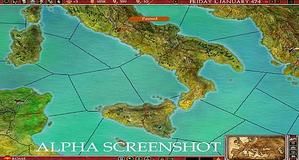