The Evil Within 2 - Boss Battle Guide 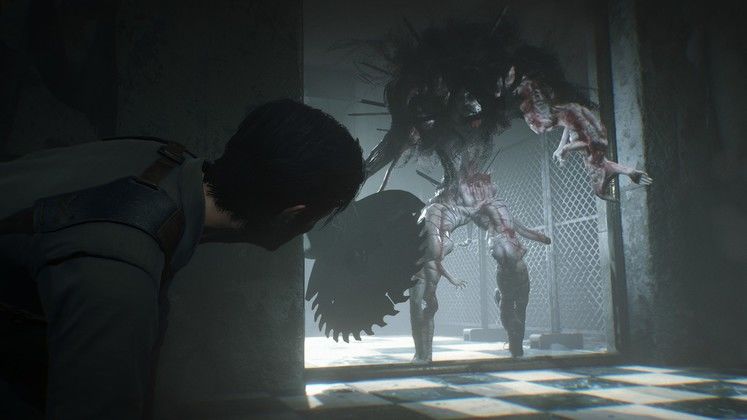 The Evil Within 2 is a tough game. The regular monsters are bad enough, such as the Lost zombies who can kill you in just a few hits if you're not careful, but what about the Bosses? The ones with chainsaws for hands or who can hide in the ceiling? Well, we're here with a guide and tips on how to defeat all of them!

We talked with The Evil Within 2 game director John Johanas! Read the full interview!

We put The Evil Within 2 to the test on a Mid-Range PC! 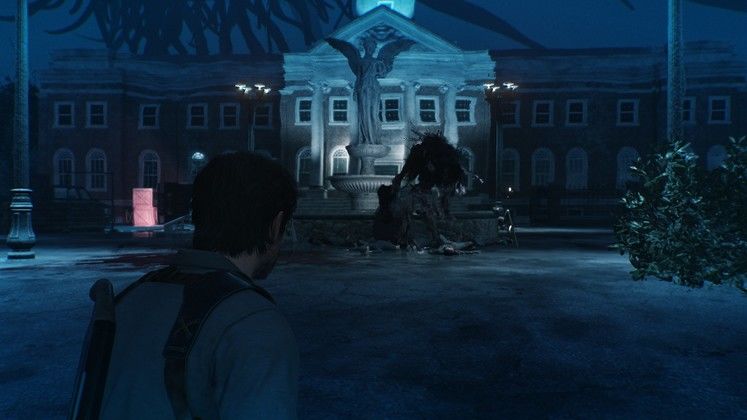 Your first encounter with the buzzsaw creature made of severed people parts comes in Chapter 2. There simply run away from it, escape into the vent, run away again, then stab it with a QTE to escape.

Buzzsaw turns up again in Chapter 5 just before you enter City Hall. This time you have to kill it. The area is quite large and you can certainly break line of sight with it, but it's often easier just to run and dodge around corners. There is plenty of ammo around as well as harpoons, but there are two things you have to watch out for:

Tripwires: Sticking out of bodies set in chairs. There's a couple of these around to hurt and slow the creature. Crouch under them or lure the creature into them. Make sure to set your own Explosive harpoon tripwires up too, just, er, don't walk into them yourself.

Oil Spills: There's an explosive barrel in the top-right of the area you can knock over, then shoot the resulting spill with the Stalker close so you set it on fire. That can only be used once, but there's also a damaged Oil Tanker leaking oil on the top-left which can be set on fire multiple times.

The Sniper Rifle is great on Buzzsaw if you get far enough away, otherwise Shotgun at close range and the aforementioned oil spills and tripwires. Avoid its attacks and it'll go down fairly easy.

However, sadly this will not be the only time you face the Buzzsaw Creature as it'll start appearing in the free-roaming areas in Union after this point. At least there you can choose whether you want to take it on or not. You might even have upgraded weapons to use on it. 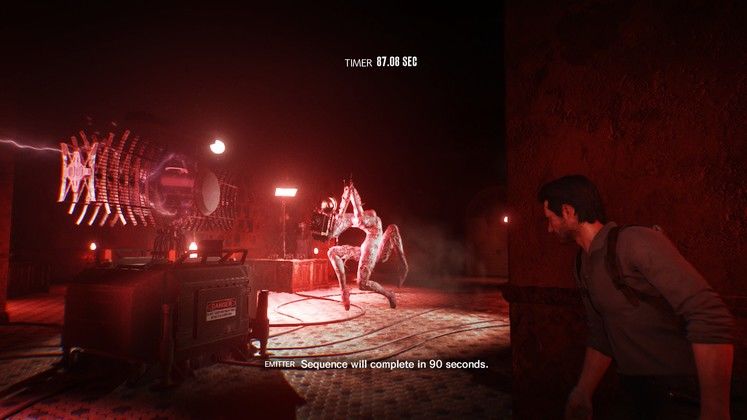 Bad luck - the Stalker is not the only boss you'll face in Chapter 5, although at least it's the only one you have to kill. The Obscura appears for the first time just as you turn on the Emitter. Here your goal is just to hurt and distract the creature to allow the countdown to finish, while staying alive of course. While the area is smaller there are walls and obstacles everywhere and the Obscura isn't that fast, so you can hide from it fairly easily.

Most importantly, you don't need to do anything about killing it. Just stay out of its way, and when it freezes time shoot the camera lens (the Shotgun was best for us) and the countdown will resume. After 80 seconds it'll retreat. Just be aware when it jumps into the ceiling, it becomes a little faster and harder to see. Try and keep out of its way when it does this. 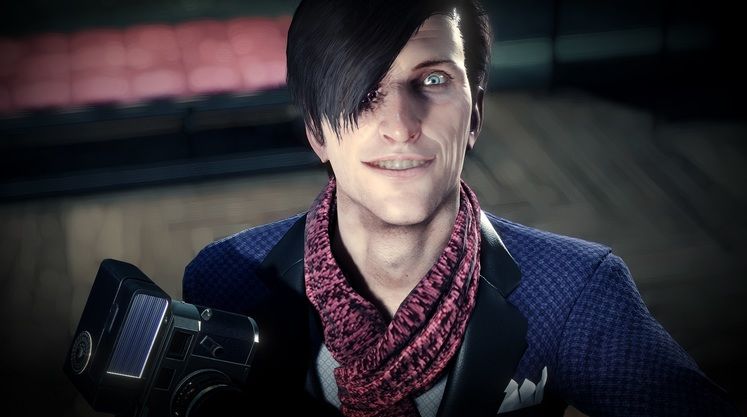 After seeing him and his awesome power the entire game you finally get to put some bullets in the twisted freak, in Chapter 8. Hooray. Here's our tips:

Keep moving! You can hide, but it's easiest to avoid his attacks, especially when he throws his knife (he'll be standing still) or goes for you with his knife.

Don't shoot while he teleports. In his first version he'll teleport around four times before attacking with his knife. You'll need to avoid his attack and quickly fire, but don't bother attacking while he's teleporting as it'll do nothing.

Take cover and attack while he charges his camera. As long as he can't see you, he can't freeze you, but he will be vulnerable. Briefly.

In Phase 2 the giant Camera Aperture will assist him. Stay away from the middle areas between the larger cover walls.

If he creates Orange Cubes, stay away from them! They'll explode on contact! Don't worry, they'll disappear after a while.

When he runs at you or does his teleport attack in Phase 2, Sprint away! Yes, specifically sprint. He'll either try to grab you or just do massive damage with his knife. Sprint, but make sure to shoot him too if you can once you've dodged successfully.

And then you should be done! 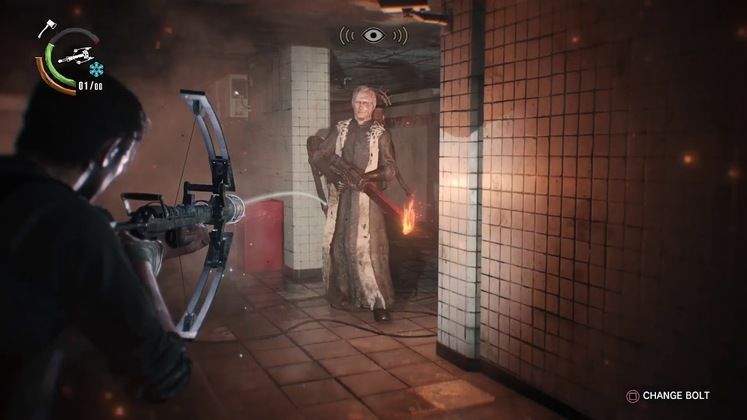 Poor, cowardly O'Neal. Now he's an insane boss guy with a big flamethrower. Dodge his attacks as usual, particularly his charge. Pick up any ammo you see, there's a lot about. Here's our specific tips:

Use Sneak Attacks: yes, unlike other bosses you can actually hide and use sneak attacks on him. They're pretty devastating, but er... don't hang around afterwards.

His fires block areas, but you can put them out. There are yellow switches around the sides which activate the water systems. Just be advised they don't put out all his fires in the room. That'd be too easy.

Use Shock Bolts or the Cryo Tanks to stop him in his tracks. Either set up Bolt Traps to stun him or blow up the Cryogenic Tanks to freeze him, both will stop him for a while and allow you to Shotgun blast him.

Once he takes off his mask you're halfway done, and just a bit longer and you'll do him fine. Just take things slow and, if in doubt, hide! 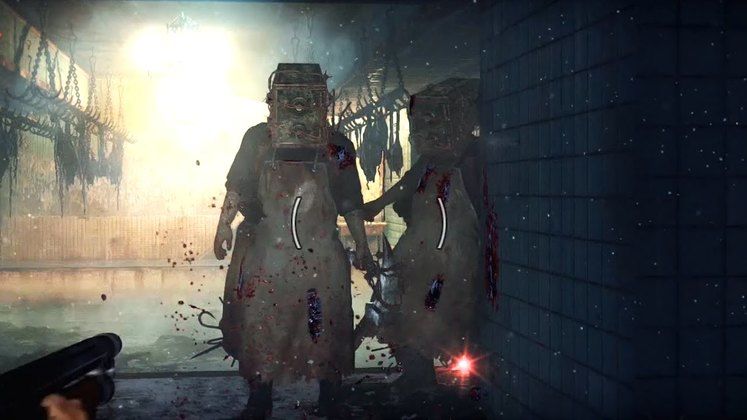 Instead of attacking you like a man, Father Theodore summons the most iconic enemies from the first Evil Within. The Keepers come first. Yes, more than one. It has two attacks - hammer charge, which you should run away from, and swinging its body bag.

Don't try to hide. You can't hide. Er, yeah. Sprint and avoid, but you can't break line of sight.

Kill the first one and you'll get to fight two of them. Which, I'm afraid, you have to. Use Stun Bolts if you want a breather, otherwise try and keep them together and in your sights. Explosive Bolts are good if you group them together.

And that's it really! They're all brute force, keeping shooting and they'll fall. Unfortunately they're only the first phase of this deja vu boss battle... 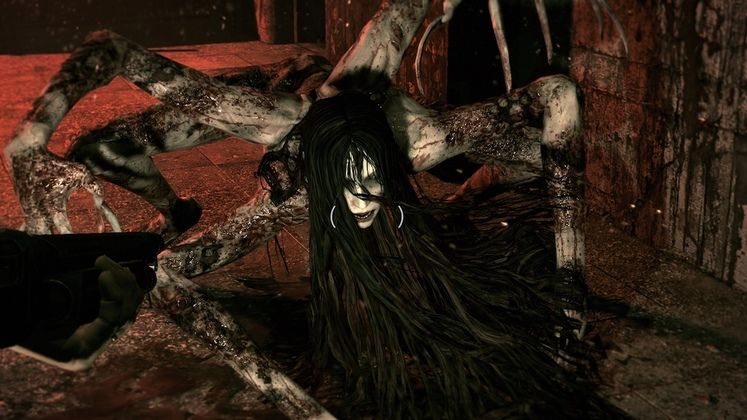 Oh god, we've already got the Buzzsaw Creature, now we have to face the spider-like Laura again too? Urgh!

Avoid her teleport! Sprint dodge away if you see her teleport, which she'll do when she gets close. If she gets you it's an instant fail. Or rather, death.

Don't have the Flamethrower? Activate the Fire Traps. The hard way to do this is to activate two valves to turn on the fire traps. With both on you can turn on the centre Trap. Shock Bolt or Freeze her in it then turn on the yellow lever.

That should be it, and Father Theodore too! Only one more boss to go... 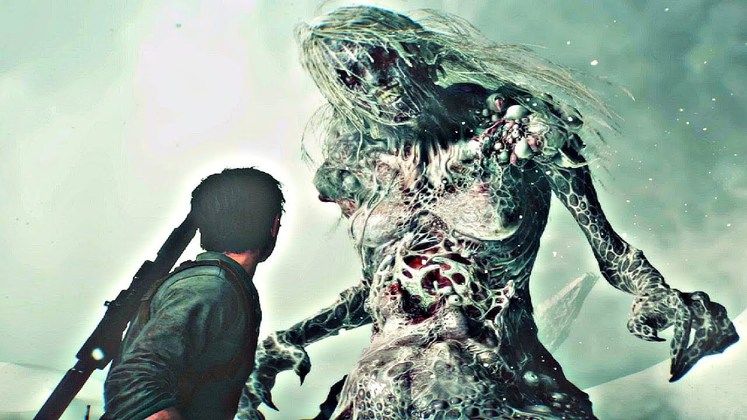 We told you about the spoilers thing right? Yes, the last boss fight is Sebastian's loving wife. For any married men out there, this fight is only slightly less difficult than the one we face every day.

Shoot Her Glowing Weak Spots At Range. Yes, the most videogame-y boss trope ever appears in Evil Within 2's final boss, and we're a little disappointed. Either way you can't get too close, so shoot them at range with the Pistol or Assault Rifle. Hopefully you've been upgrading them. There are three phases, or rather three spots to hit her on - 1x waist, 2x shoulders, then 1x jaw.

Watch out for spiders, but stomp them for ammo. Useful little deadly spiders.

Sprint Dodge her arms, but removing them is worse. With her arms intact she'll slam the floor or sweep the ground, but if you shoot one off it gets replaced with a creepy tentacle. This also can slam the ground but also does sweeps too.

Good luck! Not that you need it now!

Middle-Earth: Shadow of War - How to Get All Ithildin Fragments and Poem Solutions Guide

Tips For Playing and How To Succeed in Dungeons 3