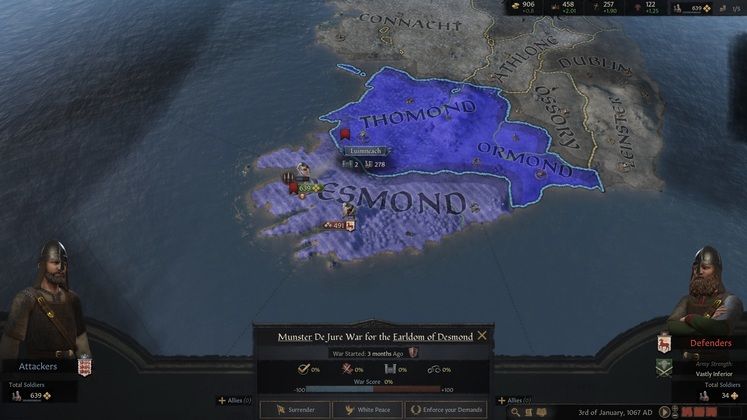 For the longest time, Ireland was the most recommended place for new players setting off on their journey through Crusader Kings II. The island housed several smaller kingdoms and was safe from the continental tumult, offering a more relaxed first experience. But that didn’t stop a generally ineffective tutorial and an UI with an overwhelming amount of buttons from making Paradox Interactive’s medieval sandbox rather daunting.

Crusader Kings III aims to change that, its revitalized approach towards tutorials and player onboarding representing a significant leap for a series notorious for how difficult it is to get into.

Crusader Kings III fully embraces Ireland as Noob Island, its tutorial putting you in the shoes of one of its petty kings, Murchad of Munster. The very first dialog box makes clear something that’s not always evident about the series to new players: Crusader Kings III doesn’t have a way to “win”, instead, being entirely focused on enjoying the stories that unfold and creating your own.

From there, you go through a series of tutorial windows explaining different vital concepts like dynasties, stats or traits. These also require you to perform various actions that help with mapping the important menus, like those depicting a foreign leader’s family and vassals – useful for when you’re seeking to marry characters off – or your own Realm screen that offers a detailed breakdown of everything you control. 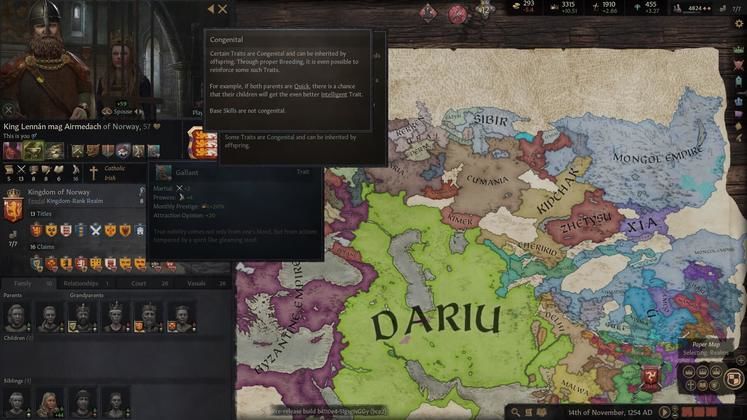 Crusader Kings III’s tutorial messages are a step above their predecessors. They are detailed enough to get an initial grasp on things without overwhelming the player while also touching upon minutiae like how titles can have different cultural names. Coupled with the new highlighted text system, they’re a considerably more efficient tool in terms of giving players something closer to a running start.

That being said, the version of the tutorial we played did reach a point where it started throwing information our way a bit too quickly and without properly showing how to deal with everything presented, which could have been a result of playing an in-development build. Tips also continue being given throughout the game as new elements appear, players always having the option of resetting the reactive advice to make it re-appear after they’ve read it once.

Crusader Kings III’s tooltips are really the star of the show when it comes to helping players understand the complex simulation they’re dealing with. Each one now features a good chunk of information alongside highlighted text that opens up other tooltips as soon as you hover your cursor over it. You can, potentially, pile up tooltips until you get a better understanding of all the concepts involved in whatever it is you’re dealing with. You can also customize your tooltip experience using three different Modes and four different sliders that change how they behave.

Timer Lock waits for a second or two before locking the tooltip in place, allowing you to move your mouse cursor over it. Action Lock allows you to manually lock and unlock tooltips using the middle mouse button. Lastly, Mouse Tendency locks the tooltip in place until you move the mouse cursor in a different direction than it. Then, we’ve the sliders that let you decide upon the delay before tooltips appear, are locked, unlocked or locked when another tooltip is open. 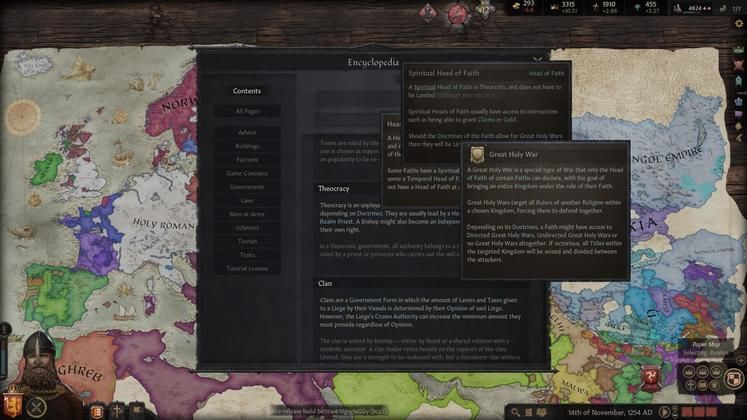 The Issues widget found at the top of the screen is another significant addition that, when clicked, opens a window with suggestions and details regarding your current situation. These tips can include anything from increasing opinion with a powerful vassal or family member to letting you know that you can create new titles, declare war, ransom prisoners or that you hold too many duchies.

You can freely dismiss each individual advice with a simple right-click and bring them all back at the press of a button found, conveniently, in the same window. Overall, it’s a much cleaner solution that, during our time with the game, was an indispensable companion which made our kingdom management more efficient.

Lastly, there’s the Encyclopedia, which gathers a ton of information about concepts, mechanics, unit types and even the full tutorial lessons in one place. Better yet, it also supports highlighted words, making it a go-to spot for learning or remembering how virtually anything works in Crusader Kings III. For example, sometime after adopting Elective Tanistry as a succession law for the Kingdom of Ireland, we decided that we were better off with House Succession which gave the title to the oldest member of our house.

This ensured a relative amount of control and a lack of realm fragmentation while eliminating the elective element. We shifted to House Succession but, initially, nothing changed. That's because Tanistry, assigned on a per-title basis, takes precedence over other realm succession laws. While this isn’t obvious right away, it only took a simple search to learn that’s the case from the Succession Law entry in the Encyclopedia. 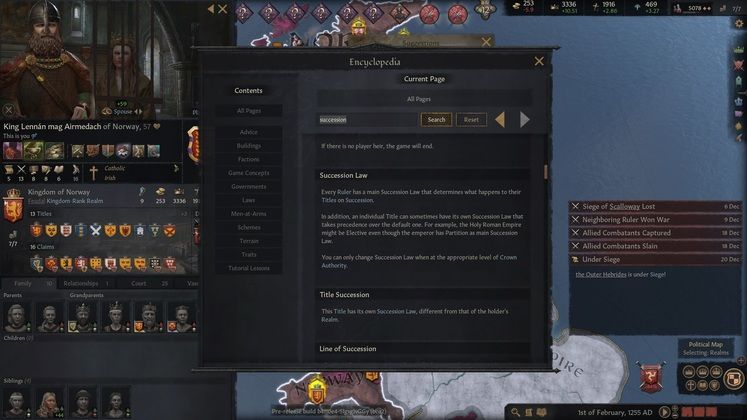 If you’re worried about sinking deep into the Encyclopedia for a few hours and emerging a master of all things Crusader Kings III, that’s unlikely to happen. As you play, you’ll still uncover new interactions and buttons or shortcuts you didn’t see at first. You’ll also need a hefty dose of directly fiddling with army composition, movement and kingdom management before you can hope to master the game.

Furthermore, all this effort towards better tutorials and player onboarding doesn’t undermine the often surprising roleplaying outcomes, nor drain the game of its storytelling potential. What it can and, we suspect, will do is offer a considerably smoother first experience than its predecessor ever did, marking a leap towards solving a long-standing issue of Paradox grand strategy games.