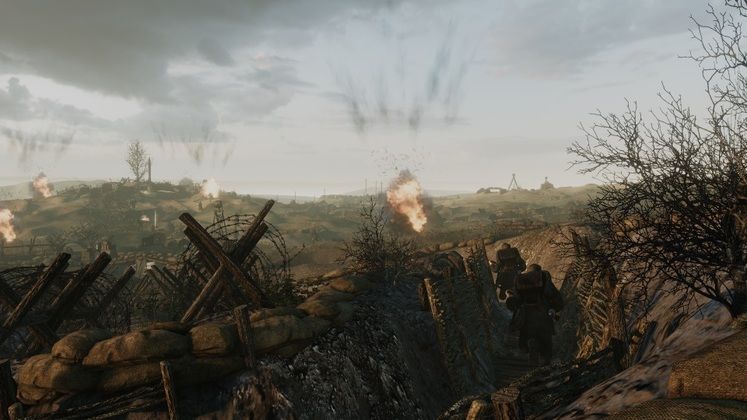 Tannenberg's developers seem to have outdone themselves with the game's new Ukraine map, inspired by the trench combat of the historical Battle of Zborov. Plain and uninteresting at first, the level plays host to complex tunnels and artillery batteries that players need to weave between.

Developers M2H and Blackmill Games have gone to great lengths in an attempt to replicate the style and feel of trenches that were dug out in Ukraine during WW1. In return, this has directly affected the type of gameplay that the map can support. Expect long lines of sight and long-range combat.

As the comparison screenshots show, the end-product is remarkably close to the historical sources that devs have collected. "Representing artillery is essential to creating an authentic WW1 game," says the official blog post. "The artillery players use in combat (calling in barrages from field telephones) is a long way outside the battlefield — but that doesn’t mean that you won’t see any big guns up close." Quite the opposite, numerous fortifications dot the map, and make for useful waypoints in the heat of combat.

That said, don't expect to be using said guns in active combat: "In-game, the fighting has reached too close of a range for these guns to be fired. But the fortifications they are emplaced within provide invaluable cover, as can the guns themselves if it comes down to it."

It seems the developers haven't yet had enough of trenches, either: "You might think that we would get bored of researching and modelling trenches, but in fact the variety of trenches used during the First World War is something most people don’t fully understand." Who knows what their next map might be.