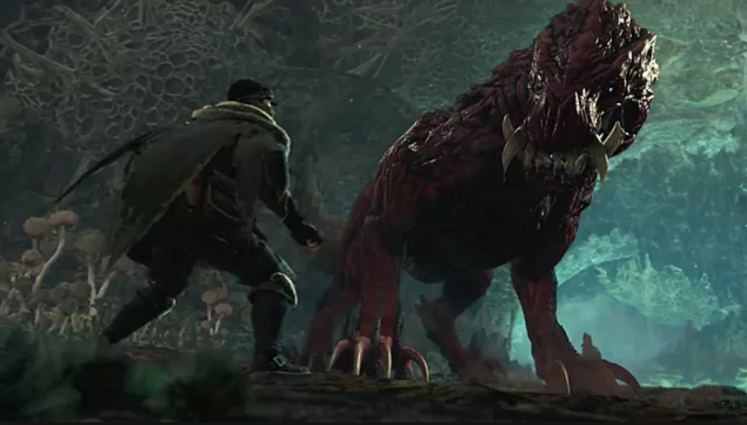 Monster Hunter World is a game all about hunting big bad well... monsters. Beasts, if you will. Rather than spend time chopping up small creatures that barely put up a fight, Monster Hunter has always been about putting blade to the bone to shut down gargantuan beasts in lengthy brawls. There's an art to hunting in the franchise; it isn't just about spamming buttons or figuring out a gimmick or weak point. We're here to guide you through the early process to that you can learn how to hunt and kill creatures like Rathalos, Odogaron and Anjanath with ease.

Each monster fights their own way, and it's up to you to read their body language and determine the best course of action as you dodge their advances and go on the counter-offensive to take them down before they gobble you up.

With that said, these hunts can be daunting for a new player. Going in blind against a new monster is the biggest challenge as you'll quite literally have to learn from your mistakes before you feel confident enough to face your enemy head on.

But we're here to make that a little easier. If you're coming from past Monster Hunter games, plenty of that knowledge will carry over just fine. But some of these monsters are brand new, whereas returning favorites might have a few new tricks up their sleeve. There's always more to learn, but we've pieced together a quick and concise list of tips and tricks get your hunts off on the right track. 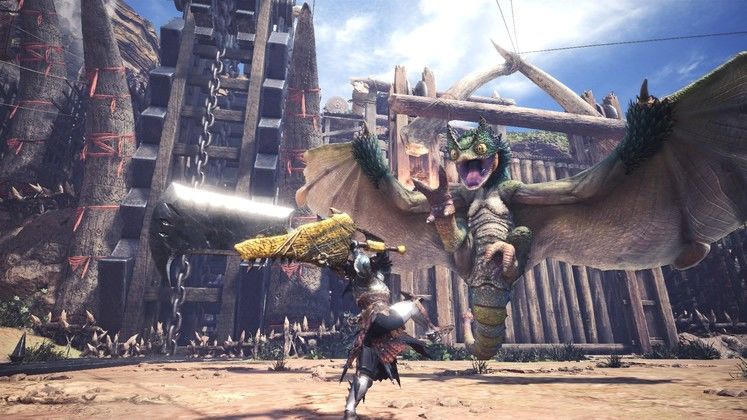 There isn't much to note about the Pukei-Pukei as it's a fairly weak 'beginner' monster that you can easily farm for some early gear. Antidotes will be a must for those unfamiliar with the creature, but knowing that its poison puddles spill down hills and linger on the field for a bit will help you avoid a sticky end.

Attack its head whenever you get a chance, but be aware that the usual tail-sweep you see in most monsters is a little different from how a Pukei-Pukei handles things. This monster sweeps from its mouth thanks to an unusually stretchy tongue, so moving behind the creature instead of away from its front or to the sides will ensure you dodge it with ease. 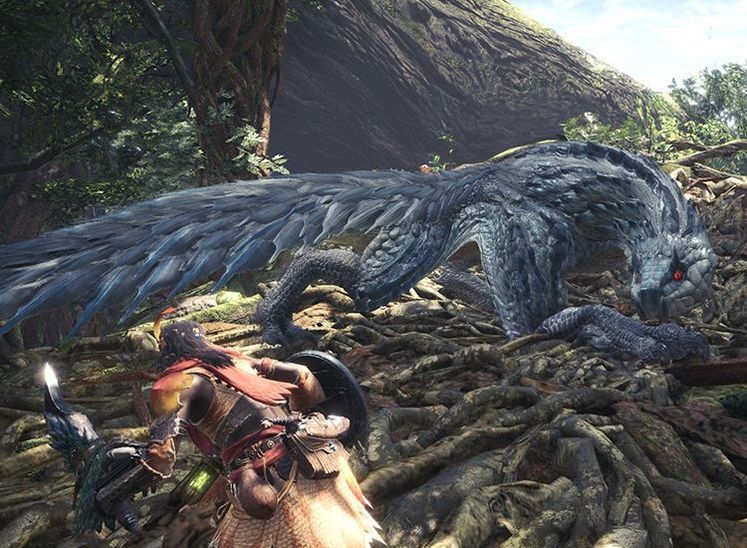 Your first encounter with these electrified squirrel creature represents a step up from the first few hunts of Monster Hunter World. It's fast, fierce and will hurt if you haven't done a few repeatable quests to upgrade your armor somewhat. But it can be beaten with the base gear so long as you're careful.

The best thing to do here is, undoubtedly, to lure it away from its starting nest. While the area may be great for melee attackers to climb around and get some decent mounting attempts off, Tobi-Kadachi loves it for the exact same reason. The narrow arena won't give much space to dodge its fast attacks, and it'll spend a long slamming you from atop the trees for massive damage.

Be patient with this one. Circle it as it circles you and try to keep on the move. Its tail is its main weapon, and it'll do anything to slam it into you for a quick kill. Attack from behind and be sure to move when it looks ready to lunge. Bring nulberries, too, as it's electricity will stun you with enough hits. 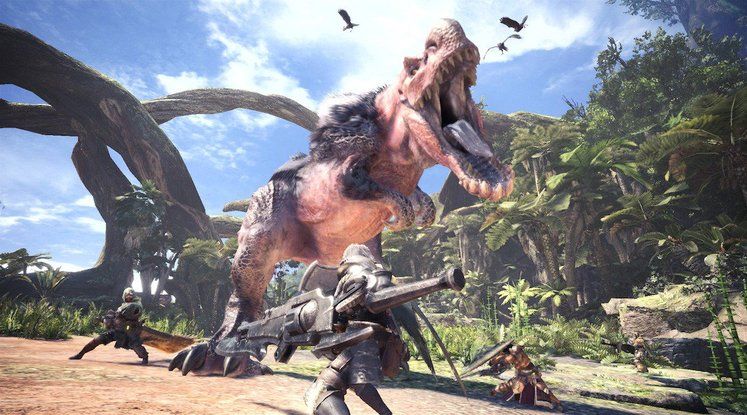 Another step-up in terms of difficulty, the Anjanath has a mean enrage depicted by the fin on its head standing tall. This dino attacks mostly with its head and mouth, making Hammer users prime bait. Gunners will need to be wary of its frequent charges, as these are its main source of damage. Rear attacks should be able to dodge most tail attacks by staying underneath Anjanath, but its feet will occasionally be used to swat you away.

The main thing to watch out for here is the enrage, as Anjanath will quickly chain attacks for massive damage. Charges and fireblasts become far more common here, so mounting the monster or using flash bombs are good options. 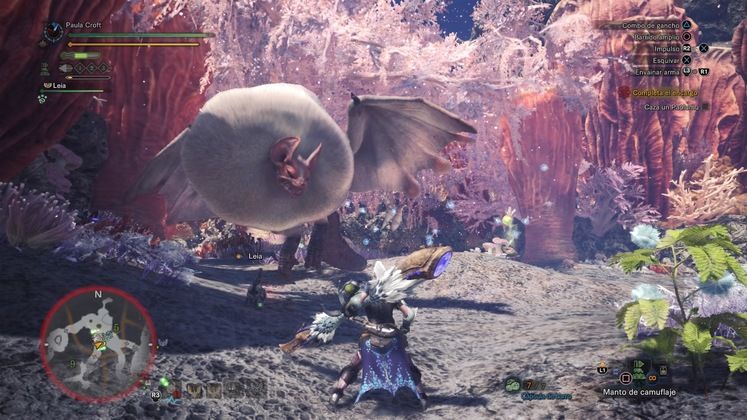 A peculiar creature, the Paolumu inflates its neck and uses the wind stored within to drift around in mid-air. You'll find it attacking on the ground for most of the hunt, but once it inflates and takes off, it'll move from side-to-side before either blasting a long-range wind attack at its target or attempting to slam down from above. As ever, flash bombs are a good way to knock it down, but it won't stay up there long anyway.

Lucky for us, the Paolumu frequents many zones in the Coral Highlands that actually work against it. Area 8 has plenty of small cliffs for mount attacks, whereas area 5 has Sleep Toads you can kick to knock the monster out for some Barrel Bomb combos.

Once weak enough, the Paolumu retreats to area 9 – a place with plenty of climbable walls and slopes for melee users to attack from. While it's a Hammer users dream in there, the holes around the higher points of the wall allow Paolumu to fly around the outside undetected and swoop back in suddenly for a scary aerial assault. 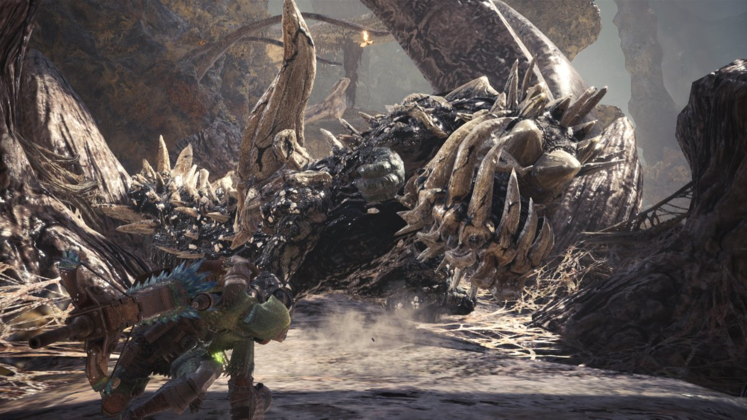 You'll come across Radobaan in one of your earliest hunts in the Rotten Vale, and you're expected to take it on right there and then. Luckily its size usually works against it – at least in the early phases of the battle.

Radobaan is encased in bone, so while this may seem like a defensive boost to the creature, the brittle old bones break very easily with blunt damage. Each break staggers a monster, so you'll interrupt most of Radobaan's attacks without a second thought. And because it likes to roll around so much, its favourite areas contain lots of slopes and slanted walls for some aerial strikes, so don't be afaid to use these to your advantage.

As it gets weaker, Radobaan becomes more of a threat. It will roll around more violently with less predictability. Your best option here to carefully watch where its headed and wait for it to calm down. If it's exhausted, it'll even slowly roll sideways with each attempt, giving you the signal to attack as it recovers. Just be mindful of when it roars as its stood still, as it can excrete sleeping gas that will make you a sitting duck for its next roll. 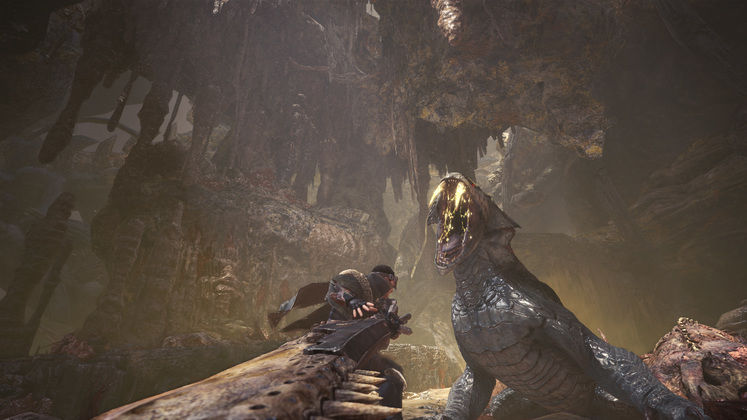 An optional monster for the most part, the Great Girros is fairly similar to the Odogaron in shape and size. A serial lunger, you'll want to watch out for its jaws if you're to live another day.

The fight against the Great Girros is mostly made difficult not by the monster's fast attacks, but the environment you find it in. There's plenty of Girros buddies ready to come to its aid, and the poison gas filling up the Rotten Vale means your HP is constantly ticking down – something that can end your run easily if you don't pay attention.

Flash bugs adorn the bottom area of the Rotten Vale, so be sure to shoot these for an easy stun. From there, use the many cliffs and ledges in the area to land mount attacks and drops for an easy kill. 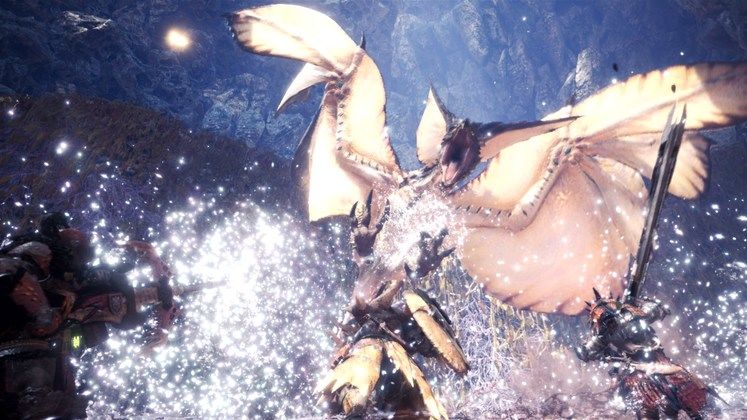 This one looks far more menacing than it actually is – although its screams will still send a chill down your spine. A key quest in the Monster Hunter World story, Legiana spends its opening moments in an area perfect for melee attacks to get the drop on it. Do as much damage as you can here, as it'll retreat to the more open areas fairly quickly.

The only real thing to look out for here are its frost attacks. These are mostly cleave-style attacks from mid-range, but they will become long-range strikes once enraged. Speaking of enrage, your best option to quell its fast attacks is to flash bomb it out of the skies. Aim for the head at this point or damage its wings. You can even use Pierce Pods to interrupt many of its harsher attacks.

Once weak, Legiana retreats to Area 15 at the highest point of the map. The quickest way up there is with a shortcut accessed by riding the wind just passed Legiana's starting area with your Gliding Suit. This will take you straight there.

A powerful and fast-moving rival, the Odogaron is a long dog-like creature that attacks with its powerful jaw and sharp front claws. Similar to the Tobi-Kadachi, fighting Odogaron means watching it carefully as it prowls and being ready to make many swift dodges.

Blunt attacks to the head work very well here, but they're also very dangerous. Odogaron's stronger moves come from its mouth and often make up a 3-part attack. He'll lunge, reposition, lunge, reposition and follow up with an even longer lunge that will likely take you down if you're not ready. Just keep running in the same direction, though, and you should be ok. Use the end of each attack cycle to dish out the hurt. 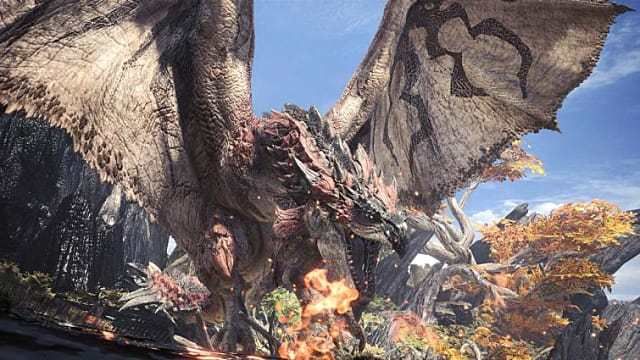 The mascot of the entire franchise is here to stay, and just as fierce as before. The Rathalos is part of a small series of quests in the Monster Hunter World story and signifies another jump in difficulty. Prepping for Fire Resist is beneficial here, but many of the Rathalos' fire attacks can be fairly easily avoided.

The main thing to note with Rathalos is how ineffective short-range weapons will be – especially the hammer. Rathalos spends much of its time hovering above ground and attacking with its claws, making high-reach weapons like the Long Sword, Switch Axe, Insect Glaive and your usual ranged weapons much more desirable here.

Flash Pods are an absolute must to keep Rathalos on the ground as much as possible. Not only will the stagger give you time to deal heavy damage, but he'll stick around down there for a little while presumably scared to get up and try it again. When enraged, Rathalos will attack relentlessly and its talons will be more likely to inflict Poison. Your best bet here to attempt a mount, but getting hit enough times will stagger you and almost guarantee you'll be the target for his powerful fireball.

We'll be updating this guide as we tackle more monsters on the PC version of Monster Hunter World over the next few weeks, but this list should see you through the first few days of your Monster Hunter career. Pesky elder dragons take an entirely different approach that we'll cover in another guide soon, but the rules of each of these monsters generally applies to the rest.

Good luck out there, Hunters!