Stellaris Getting A New Situations System In Patch 3.4

Paradox Development Studio has detailed the new Situations system coming to sci-fi grand strategy game Stellaris in patch 3.4. Its aim is to improve the way in which ongoing stories are told by providing players "an interactive and informative interface by which to experience current affairs event chains," and putting in place a structure that makes it easy to add new content.

Whether local or empire-wide, a Situation's progress ticks upwards or downwards each month, depending on how you respond to it. Doing so eventually moves it to a different stage, which often triggers an event that further develops the story, although events can also occur with regular monthly ticks. 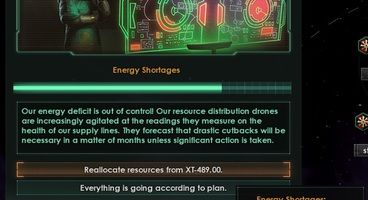 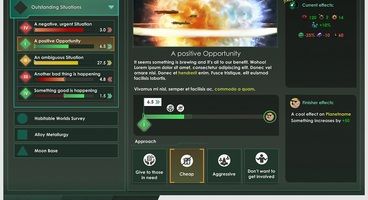 Stellaris' new Situations system lets players respond through different Approaches whose effect are often felt over time. Progress is depicted using a bar that's either filled in a linear fashion – from left to right – or which starts in the middle and can trend towards either end.

Different colors are used to indicate threat levels and, when the progress bar reaches an end, another event triggers, concluding the Situation.

Patch 3.4's Situations system will feature both narrative and deficit Situations, the latter of which resemble Europa Universalis IV's Disasters.

"One of our main priorities when it comes to using this aspect of Situations was reworking Deficits. At the moment, Deficits are like a light switch: as soon as you are in deficit (stockpile of 0 and negative income) for a given resource, you get all the defined penalties for being in that deficit (which can be quite harsh). But as soon as you spend a month no longer in deficit, all penalties are removed. This feels a bit off," dev diary 245 reads.

"With our rework, being in a deficit will start a Situation. You will start at 25% progress in this Situation, and it will increase in severity as long as you are at 0 balance and have a negative income. The rate of increase will depend on how much you are losing compared to your income. Having a stockpile will gradually make the Situation tick downwards; having a positive income will make it do so more rapidly."

The penalties attached to deficits can also be configured for different empire types. As an example, Catalytic empires will have alloy output problems if stuck in a food deficit.

More details about the new Situations system, how it intends to add more variety and nuance to Stellaris, alongside a handful of features that may not make it in when patch 3.4 launches can be found in the dev diary linked above.