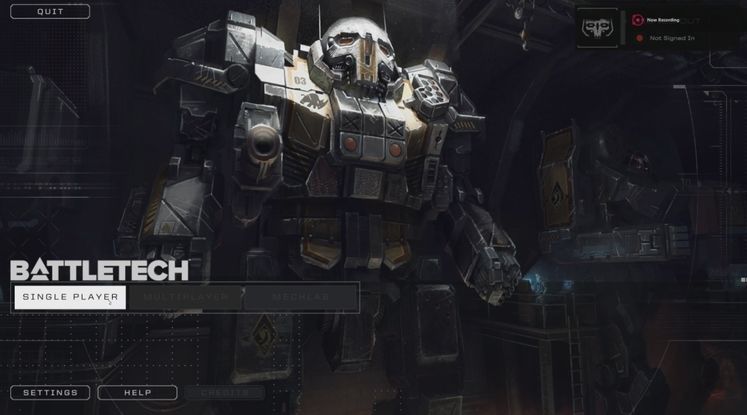 Battletech. It’s a name hardcore tabletop gamers would have heard uttered long before. Hoping to make a grand comeback, Harebrained Schemes are targeting a 2017 release for its triumphant return with a turn-based strategy video game in which a ragtag group of mech-totting mercs do battle against similar set-ups.

Starting off life as an ambitious crowdfunding campaign to bring Battletech back into people’s lives, it’s recently found a publisher in Paradox Interactive - a group known for putting out strategic blockbusters. With today being the day those backers are finally given their first hands-on time with a title they poured money into over a year ago, we’re here to fill things in for those who might have been too late to the Kickstarter game.

We were able to get some hands-on time with Battletech at Paradox Interactive’s recent PDXCON event in Stockholm, Sweden. Though the title was already well and truly announced, it wasn’t until the show that Paradox Interactive announced that they’d sapped up the publishing rights. Though backers are likely to question why they went out of their way to seek player funding only to have Paradox Interactive throw a deal their way, it’s a recurring common practice that should be seen as a sign that they’re onto something. While Paradox are certainly broadening their horizons as of late, to have a unique strategy title be picked up by the those typically issues sequels to their coveted IP should be something of a compliment to all those involved.

Battletech is all about the glory of mechanised suits of armor adorned with lavish amounts of blasters, rocket launchers, gatling guns, lasers and jetpacks. It’s about beating the living hell out of the opposing team with strategic movements, calculated attacks and tactical evasion maneuvers. Starting off simple, our demo threw us straight into the heat of battle. With 4 team members hopping to different weight-class mechs, the first order of business is to make your first move - obviously. You’ll likely start things off with little idea of where the enemy is positioned in relation to your landing zone; so it’s up to you your squad scout out the opposition while being mindful of the infamous fog of war.

With each mech being lighter or heavier than the other, certain teammates enjoy more mobility when it’s their time to move. But this doesn’t play out in a group-wide turn-based fashion. Your whole team doesn’t get a chance to react to the enemy’s movements at once. Though you’ll move them all within quick succession when the threat has yet to be identified, once you’re squaring off on the battlefield, turns alternate back and forth between a single enemy and a single teammate. Turns can be ‘held’ and carried over if you’re looking to blast an enemy with everything you’ve got - but otherwise, things happen one step at a time.

The aim is simple. At least, it was in our hour-long demo. Kill the enemy! With the opposing squad being identical in size to our own, we just had to hope our forward thinking would help us prevail. Movement is key from every angle, and simply having vision of a target isn’t always enough. Taking a few steps forward or back isn’t everything, as once your unit takes its place across this grand chessboard, you have to be mindful of which way it faces. Facing the threat is usually going to be your aim, but in the heat of the moment when retreat is necessary, facing away from the enemy would leave your more vulnerable backside open for a potentially decisive blow.

But these are mechanical war weapons - there has to be more to it than simply taking aim and firing, right? Absolutely. Even movement has become a complicated affair in Battletech. Just like how each weight class can traveller specific distances in a fight, they’re also not bound to simple dragging their chunking legs to a destination. These suits can run, jump or fly to their desired location depending on their characteristics. If a lush forest is impeding your movement, a lighter unit can likely hop right over at the click of a button. Choosing to sprint rather than walk will help a unit clear ground at a fast pace while giving them a handy dodge increase until their next turn. Reversing is necessary for heavier units that can’t simply pivot on the spot to face their enemies, while the more agile ones can opt to body slam their foe from the sky if they’re able to cover the distance with a leap that would put have a ballerina raging with envy. Though missing said leap would leave them incredibly susceptible to a knockdown - again, much like a ballerina.

With rocks, trees and other obstacles offering varying degrees of protection, fighting against opposing mechs isn’t just a straight forward ‘see it, shoot it’ affair. Each limb is a separate entity and certain weapons fire in different ways. Standing behind a rock could save your legs from becoming a primary target, while it’s entirely possible to stand completely out of site and fire launch an assault with aerial missiles so long as an ally is able to act as a spotter out in the open.

But attacks must be chosen carefully no matter the situation. While it might be tempting to have a heavy-grade machine fire 7 different guns off into the distance, a hit-chance effected by intricate terrain differences and the risk of overheating means it’s always necessary to asses the situation from a couple different viewpoints. Even though you might be able to bombard the enemy this round, leaving yourself open to a counter-attack might lead to a nasty trade. If not now, then maybe 4 turns later.

Toggling ineffective weaponry and working around the strengths and weaknesses of the attacker, target and the ongoing situation is big business. Similarly, making use of each character’s passive abilities or triggering a ‘morale’ boost can make a world of difference in a decisive situation. With enough brute force, it’s possible to topple the enemy - leading to an opportunity where you’re free to choose a specific limb to target. Blow off an arm to shut down key weaponry, a leg to limit their mobility or the head for a well-aimed critical blow to the pilot are all things that must be considered during each turn.

There’s a dizzying amount of strategic potential in every match. While the PDXCON demo had me playing for a good 30 minutes with only 2 kills to my name, the footage captured above during my less time-constrained efforts in the comfort of my own home had me shut down the opponent’s whole squad in around 25. Whether this was down to my foe’s randomised team composition giving me the upper hand or not, it felt good. I was free to execute a ‘Death from Above’ attack, pepper the back of my foe with a lethal array of weaponry and start a boxing match that would surpass the legendary Rock ‘Em Sock ‘Em Robots.

While certainly not a looker at this point in time, Battletech’s early Backer Beta is enough to excite even the most well-verse mech fan. While you shouldn’t go in expecting Gundam or Code Geass levels of mechanical punch em’ up combat, you can go into this with relatively little tactical experience and enjoy what eventually boils down to a revolutionary chess match.

Hurling dizzying amounts of fire at your enemy gives a wave of satisfaction, and seeing a foe fall to the punch of another ‘bot is humbly reminiscent of Guillermo del Toro’s Pacific Rim. The camerawork may often struggle to reach the photographic marvels of such a high-budget blockbuster movie by consistently bouncing around during enemy turns. We also found issue with the UI being a little jarring and convoluted. It’s difficult to understand each piece unless you put some serious thought into what you’re looking at. Design-wise, it’s an eyesore. But that’s usually last on the game development agenda. We’re happy to give it some time to bloom.

Though we’re currently without the game’s promised campaign mode, a simple skirmish against friends or AI helps make the wait somewhat tolerable. Battetech is raw, powerful and thought-provoking - and we can’t wait to see more. 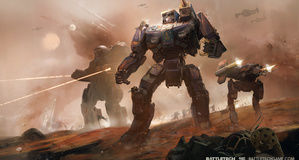