How to launch a cowardly surprise attack on a potential ally

As freeform as Paradox strategy games are at heart, there’s always a certain amount of predictability, at least initially, in the way most games play out; England and France will kick off at each other as soon as possible in Crusader Kings 2, while the Holy Roman Empire takes its pick of Europe’s choicest cuts during the early stages of Europa Universalis IV. Step one towards formulating a successful strategy in these games is working out what the AI is likely to do, and adjusting your tactics accordingly.

Playing in a massively multiplayer game is of course a completely different proposition, as I found out at a recent Hearts of Iron 4 event hosted by Paradox. Lock a bunch of idiots in a room together and give them random countries to run into the ground, and who the hell knows what’s going to happen. I drew China from the pot, a relatively undeveloped power that’s reliant more on its endless reserves of manpower than it is on military technology or industrial strength. Now traditionally, as a neutral nation with no immediate allies, Chinese players would find themselves sucker-punched by the expansionist, fascist Japanese Empire, whose well-equipped and disciplined troops and impressive navy would prove simply too much for them to handle. 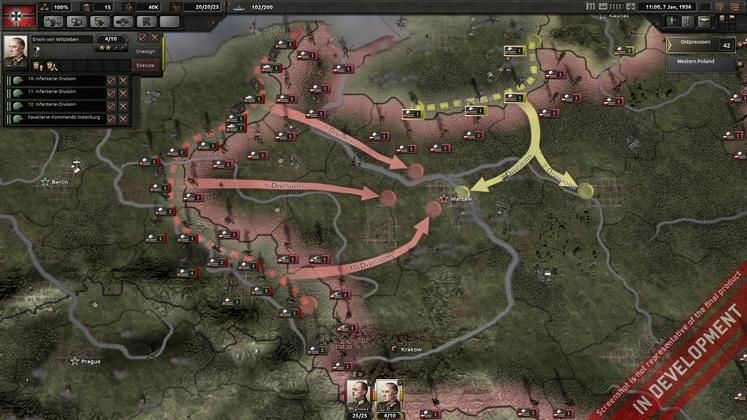 Fortunately, over a pre-game round of tea and biscuits, I’d hashed out a concrete, nay adamantium alliance with a fellow journalist who had nabbed Japan from the national draw. The target was the USSR, and the plan was simple; my Chinese army would gobble up nearby independent states, restoring the traditional Chinese Empire and simultaneously increasing my reserves of luckless peasants to send off to war, while my Japanese chums would reinforce their Russian border, with the ultimate aim of invading via a brutal naval assault on Khabarovsk, slicing off a nice chunk of Soviet territory and providing a solid buffer zone against any retributive attacks. Then we’d slowly inch forward across Eurasia, chewing away at the Great Bear’s flanks.

Best laid plans and all that. One of the new mechanics HOI4 introduces is World Tension, a measure of how screwed up things are globally, which is ratcheted up whenever anyone declares war or otherwise acts aggressively. Certain actions push up World Tension more than others; invading a country illegally can push it up to around 80%, while a diplomatic annexation that envelops a formerly independent nation into your empire might only bump it to 20%. Importantly, certain actions are unlocked the higher the Tension meter reaches; at lower levels you can justify lend-leasing guns and tanks to allies, while at the maximum level declaring war on anyone is pretty much fair game. It’s a neat system that nicely captures the ramping paranoia of pre-war Europe, and encourages you to think about long-term repercussions, rather than simply relying on your overwhelming military to steam-roll over smaller countries.

Unfortunately, it turns out that the games journalists and Let’s Players present at the event were an unreliable and warlike bunch of miscreants. It took only a month of campaign time for everything to go to hell. The German Reich attempted to occupy the de-militarised Rhineland, and rather than adopt the historical policy of appeasement, his French rival decided to rally his fellow Allies and respond with military action. This basically caused the World Tension meter to explode. Happily, the escalating tension also meant that me and my Japanese pal could form our own faction. After some consideration, he came up with the nom de guerre of The Japan-Chinese Syndicate, and we began to prepare our armies for the invasion of Russia.

Thus began an extended, uneasy period of brinkmanship, as Soviet forces were pushed to the Asian front, taking up defensive positions across the border, only a few miles from the Japanese army. More and more arrived, to the point where my ally worriedly requested reinforcements from the Chinese Second Army, currently preparing for an invasion of Ghaunxi. Essentially, both us and our intended target were just too cowardly to commit to an offensive, despite being deeply suspicious of the other’s motivations. There were several amusing (but also quite tense) face-to-face conversations in which said target tried to tempt us towards the virtues of communism, while we nervously tried to cover up the fact that we now had troops on manoeuvres all across the Mongolian border. 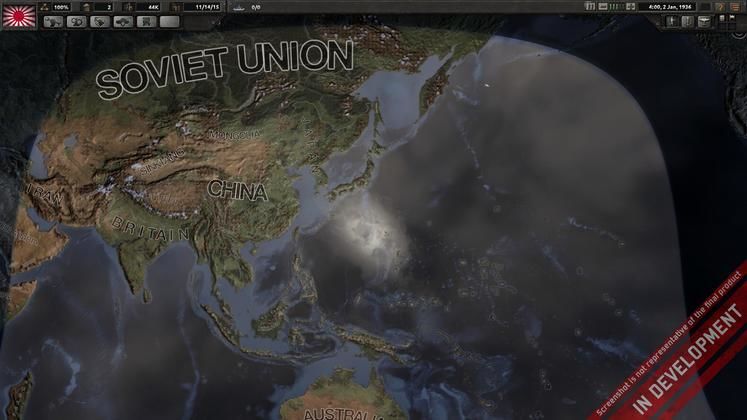 Ultimately, it was Poland that helped break up all the macho posturing. As the leader of a neutral nation, the Polish player was essentially free to throw his lot in with whichever faction suited him best. In this horrific alternate reality, the Allies were even more bloodthirsty than the German Reich. In fact, they’d pretty much broken an isolated and unprepared Germany at this point, and were looking for new targets. Poland suggested the USSR, who’d withdrawn his forces from the West to counter our Eurasian build-up. And so it was that the mighty Polish army, backed by legions from France, Britain, and even some plucky Australians (how did they get there?), marched on Stalingrad, beating back the poorly-equipped Russian defenders with contemptuous ease.

At which point the Japan-Chinese Syndicate sneakily declared war as well. Hey, we never said we were heroes. There’s a brief struggle with HOI4’s new force deployment mechanics; after grouping each army into separate blocks, you use a set of tools to paint your lines of engagement onto the campaign map. Once you’ve set up a frontline, you can assign an offensive objective deeper in enemy territory, and the AI will deploy your infantry divisions with the intent of pushing forward to that set location. It’s a fine way to automate simple conflicts across relatively small borders, but it quickly becomes fiddly when you’re trying to organise an offensive into an area as expansive as Russia. The painting tool can be frustratingly imprecise, and deleting incorrect orders involves clicking directly onto the map – when you’ve got multiple armies all converging on the same location, it can lead to awkward traffic jams. I mostly used the system to place troops, then dealt with any offensive movement manually. I do like the concept though, and there’s plenty of time for Paradox to clean it up. Some simple tweaks like a slightly reworked UI and a way to automatically delete the last order given would make a big difference.

The war was going well, at least. China’s incredible manpower, combined with its respectable ability to pump out industrial facilities and military equipment, meant that I had access to an almost constant stream of reinforcements. Using the unit designer tool, I created elite divisions of mechanised infantry, who were able to quickly respond to any changes in the Soviet line, popping up to reinforce vulnerable areas or exploit potential breakthroughs. That worked until I ran out of oil for the halftracks. Then I went back to horses. Despite these logistical issues, however, we were beating back the enemy, who had at this point accumulated a frankly hideous two million casualties. Things were looking good!

It’s at this point, somewhat anti-climatically, that the game petered out. Hearts of Iron 4 is a far more all-or-nothing affair than other Paradox strategy titles, partly due to its far shorter time-frame. Wars are only decided when one side controls all the victory points of the other, and in the current build there’s no opportunity to sue for peace midway through a conflict. The brave Generals of the Japan-Chinese Syndicate realised this a little too late; while our forces were making good inroads into Soviet territory in the East, there was pretty much no way for us to push far enough into Western Europe that we could secure victory, despite the fact our Wargoals consisted only of securing the Chinese mainland. We settled instead on an unspoken truce. Syndicate forces secured their gains in Eurasia, despite technically still being at war, while our USSR foe headed back to Stalingrad, where an unholy cabal of various supposedly ‘trustworthy’ nations was currently hammering the city into lumps of stone. Oh, and then Canada invaded Japanese-controlled territory in the Pacific, just to add a final touch of lunacy to proceedings. 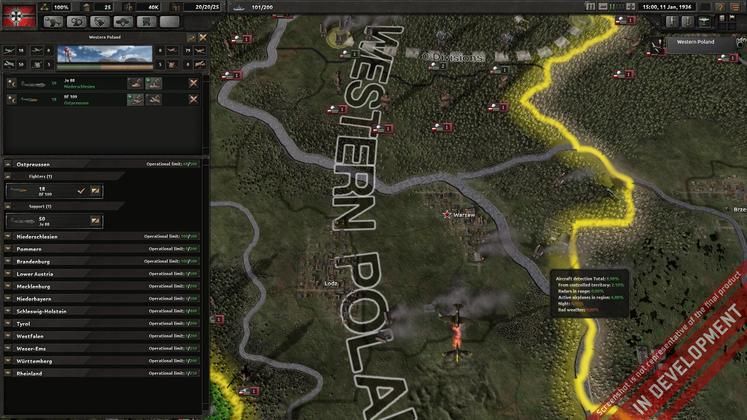 I spoke to members of the development team after the match, who admitted that the current peace options lack flexibility and favour drawn-out wars of attrition. They’re looking at different options for diplomatic resolutions of conflict, but at the same time they’re keen to point out that this isn’t a game of empire-building. If you start a war, you’d better be prepared to deal with the consequences. Ask the German army stuck in Russia circa 1941 how easy it is to back out of a poorly though-out offensive. Still, it would be nice if there were a few concessions – we’d battered our way through enough of his troops that I feel our hapless victim would have been more than happy to cede some territory in order to be able to focus on his struggles in the West.

There’s some work still to do, but all the core elements are in place for Hearts of Iron 4 to provide a tenser, more focused alternative to Paradox’s other grand strategy titles. While it’s thematically and mechanically a very different beast, the game’s certainly benefited from those games’ improvements in UI and presentation. Considering how much there is to master in the game, from diplomacy to trade and production, it’s remarkable how easy it is to get the hang of the basics. Two hapless rookies (idiots) almost managed to topple the Soviet Union. The prospect of regularly finding twenty-plus multiplayer games when the game launches is sadly unlikely, but I’ll definitely be strong-arming some friends into multiplayer at the first opportunity.

Most anticipated moment: The game’s chock full of historical events, most of which can send the game spinning off the rails in all sorts of interesting ways. Can’t wait to screw things up worse than they were screwed up historically.