Hands-on with the latest from the Darwinia and DEFCON dev

10 July 2012 | By James Day
Prison Architect’s title is not just a pretentious indie game name. In Introversion Software’s latest you are literally constructing and maintaining prisons.

Viewed from the top-down perspective you have to build your standard criminal detainment facilities like cells, a sick bay, a canteen, a yard and even a room for the electric chair. Staff like wardens, construction workers, nurses and canteen workers must also be hired to keep things up and running and keep the inmates in line.

Rooms have to be mapped out, doors and windows placed. Certain objects are required for designated rooms to operate properly. For example, a basic prison cell requires a bench, a cell door and a toilet.

Income appears to be gathered on a monthly basis depending on the number of prisoners serving sentences in your prison. Operating costs such as staff salaries must be factored in and you have to keep inmates sufficiently happy through your range of facilities to prevent fights breaking out.

The game's tone is a little confusing at this point. During game play the graphics resemble a flash animation (the characters in particular remind me of the minimalist designs seen in the Zero Punctuation game reviews) and look like they could easily be in a Facebook game. However, the comic book-esque still frame cut scenes are drawn in a much more realistic and gritty style. Combined with the earnest musical score it seems like the game is playing itself seriously despite the cartoony flash graphics.

The build we played started out with a tutorial, dropping us into a pre-made prison but guiding us through the process of creating a new building. We built foundations, walls, doors and windows and then bought the necessary items to create a room for the electric chair. A sentenced convict was then led to it and executed while the back-story of his crimes was played out in one of those dark still frame cut scenes.

The sandbox mode was also on offer allowing us to start a prison from scratch. The basic ingredients for a functioning facility are a power plant, running water, a canteen with staff, at least one cell and at least one guard.

However, we got too ambitious too soon and quickly ran out of funds. With further hands-on time it'll likely be easier to get a sense of how much everything costs and what the most cost effective strategies are.

Despite its conflicting tone, the game is showing a lot of promise. If you've ever enjoyed management titles like Sim City this is definitely one to watch. Prison Architect is coming to PCs though it doesn't yet have a firm release date.

Most anticipated feature: As with all management/god games the sandbox mode is probably where you’ll spend the most time making the biggest and most efficient prisons. 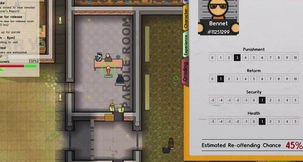 Introversion "closing in on the end game" for...
1 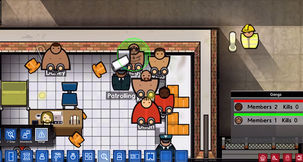