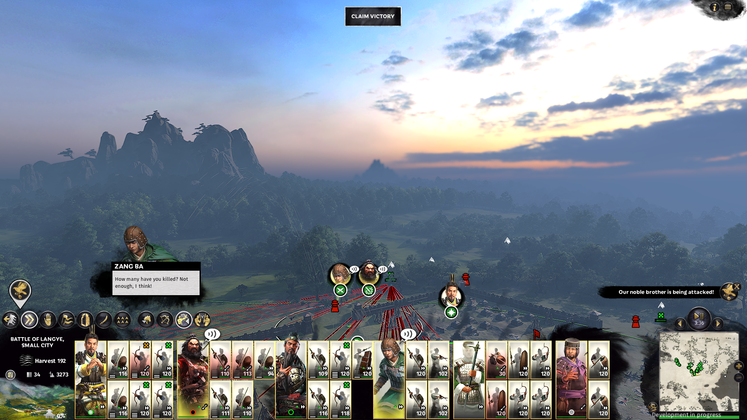 As Creative Assembly’s Total War franchise finally sets its sights on Ancient China for the first time, the series takes a leap of faith by bringing actual history and popular culture closer together than ever before. Gone are the 20-stack armies of elite troops with a general whose main purpose is to provide morale boosts – Total War has long been about units, but it’s now about characters.

Total War: Three Kingdoms is the latest historical instalment on the long-running strategy series, arriving four years after Total War: Attila. Inspired by the eponymous period of China history that led to the unification of the country under the Jin dynasty, 3K draws inspiration from historical records and Luo Guanzhong’s mythical novel Romance of the Three Kingdoms to actualise the period and its larger than life characters. 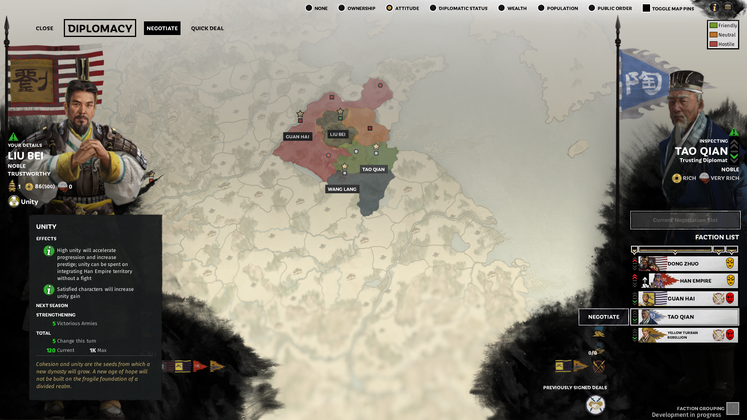 “Originally we wanted to do a single mode for the game, so we started with the Romance version of the game, where characters would meet each other on the battlefield in single duels and go through whole units single-handedly,” says Lead Designer Attila Mohacsi. “That didn’t felt authentic, so we tried to do the historical model – but that wasn’t doing justice to the book anymore. That’s when we made the decision that we needed to have two modes in the game and that freed ourselves from the need to juggle between the two.”

Though Three Kingdoms features two modes – Romance, where generals act like lone hero units capable of taking half an army by themselves; and Authentic, which plays like a standard Total War game where squishy general units are surrounded by bodyguards – my three-hour preview was spent with the former, digging my heels deep into the Romance mode and exploring the beautiful landscape of Ancient China as the underdog Liu Bei. 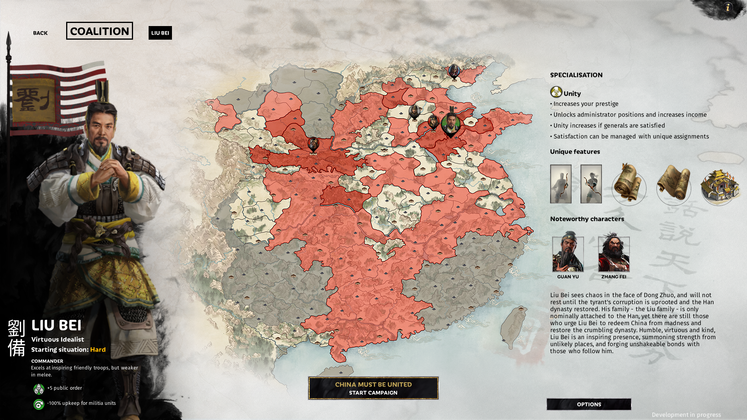 During the course of 30 turns, I’ve engaged in dozens of tactical battles and quite a number of duels – and was pleasantly surprise to find 3K Romance mode doesn’t follow Warhammer’s MOBA-like battles. Units don’t get obliterated in an instant by a hail of arrows, melee infantry doesn’t kill dozens by the second, and cavalry regains its former value as an instant morale hit when hitting enemies in the flanks. And amidst all those fields battles, the new resource camp battles, and proper city-wide siege battles (they’re back!), characters met each other in single combat, knocking the enemy off their horse before dismounting and engaging in a cinematic duel to the death. As the heroes duel, stabbing, slicing, and kungfu kicking each other until one of them either dies or flees, the army surrounds them in fierce melee, leaving a circle around the dueling opponents for as long as their faceoff lasts.

“Three Kingdoms went into development before Warhammer 1 was released, so the great reception to that game’s unique factions and characters felt like a justification for us to go even deeper with our vision,” says Attila. “Characters develop relationships with each other, and they are just as important in battles as they are in the campaign; if two bitter rivals meet in the battlefield for a duel, only one of them will survive. But if two friends have to fight, they will refuse to kill each other.” 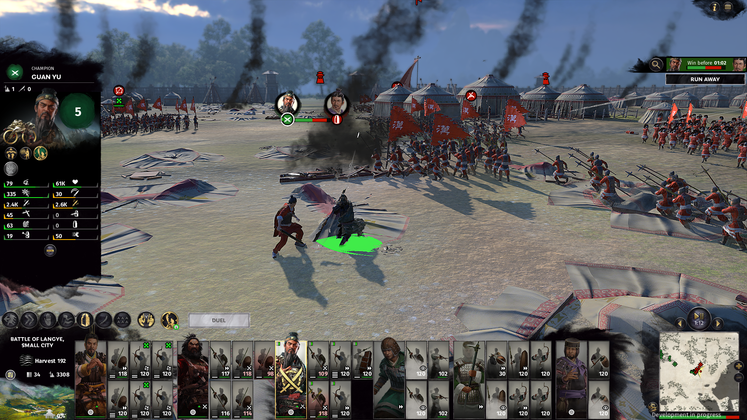 That focus on heroes is a crucial part of the Romance of Three Kingdoms book and the characterisation of the period, and it contributes to what Project Art Director Pawel Wojs calls “Authentic plus plus”.

“We were looking at the book, and character duels happen all the time – almost every character will at some point duel with every other character,” he says. “We decided very early on that characters would be a focus of the game, and the character-centric design counters the monoculture drawbacks of the project, because we get so much variety and flavour from each of these individuals and the fact they fluid and move throughout the whole game.” 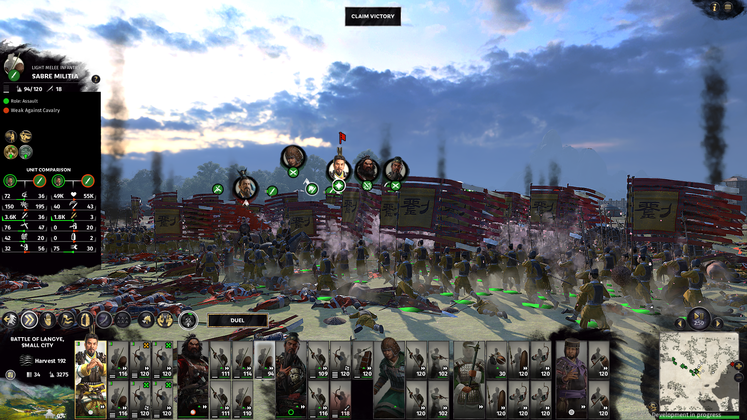 Indeed, heroes are no longer bound to specific factions, as even faction leaders can change allegiance as the campaign progresses. Factions and positions were a fickle thing in Three Kingdoms, and characters may change the recipient of their loyalty based on player actions and developments throughout the game.

“If you have two generals that don’t like each other in the same army and they lose a battle, they will start to blame each other,” says Pawel. “Their relationship shapes the way they react, and the events of the campaign – like winning battles together – may change how they feel about each other.” 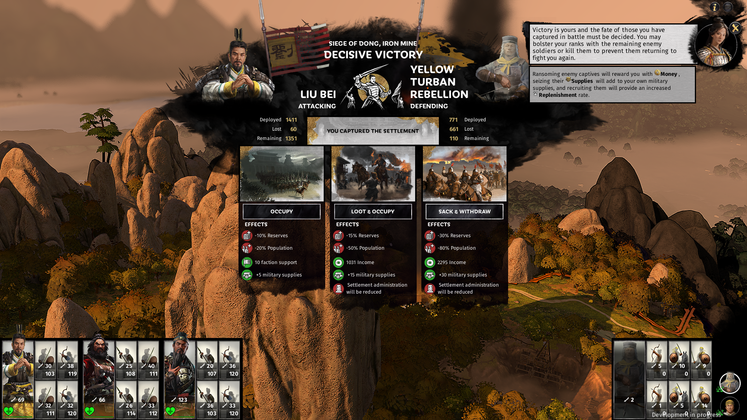 Characters are important as army elements, too, since units are now unlocked based on a general’s level. Recruits are not immediately added to the army but may take a few turns to reach full fighting strength, employing a system similar to Thrones of Britannia. Unlike the spin-off, armies retain tactical stance options like double march, encamp, and ambush, and campaign mechanics have also been tweaked, with provinces now divided into dedicated settlements with a single building tree. Major cities offer a couple of upgrade paths for each slot, but all freedom of building is gone thanks to the lack of proper military buildings.

Mechanics aside, the most striking thing about the new entry is how it feels and plays. Three Kingdoms is the biggest jump in Total War development since Rome II succeeded Shogun 2: the UI, graphics, and battles all scream next-gen, replacing the established trend of menu buttons and central unit/building card elements that’s been in place since Rome II with a clean modern interface. The game embraces its Chinese inspirations, using artistic representations on everything from the research and diplomacy screens to the zoomed-out overhead map. 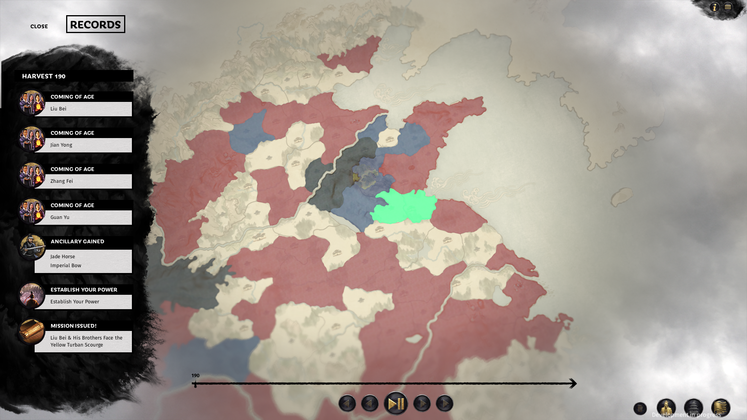 “I think the setting was perfect. I couldn’t think of a better artistic setting, to be honest,” says Pawel. “The history is so rich, and the art history is so unique, and China itself is beautiful.”

“We’ve been making similar things for a while, so we wanted to take a slightly different angle for this particular game,” he continues. “We did not wanted to go down the same traditional route of very skeuomorphic detailed UI of wooden panels, but go for a much more modern and minimalist kind of feeling – have more fluid inks, 2D illustrative style for the UI, the characters. It was definitely challenging. We wanted to challenge ourselves.”

Come March 7th, Total War fans will be able to see the results by themselves. From the beautiful towering rock pillars of Eastern China to the amazing character animations during duels, Total War: Three Kingdoms feels like a next-gen game – and so far, it plays like one, too.