Heaven is to be rent asunder, Earth shall fall away 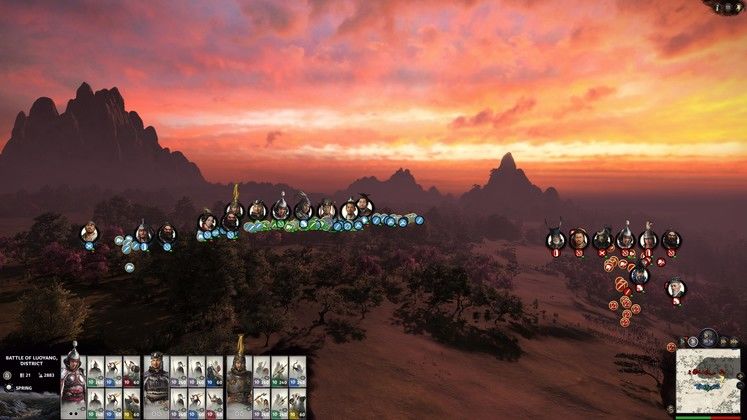 In a way, it feels like Three Kingdoms could never have been done before Warhammer. Before the first fantasy spin-off hit the shelves, the idea of a one person unit in Total War killing hundreds of people by itself would be alien at worse and disjointed at best, but after Warhammer, it proved weirdly acceptable. Crucially, it showed the series has a unique potential to straddle the “realism” of warfare with the larger-than-life deeds of mythology, and opened a whole can of worms to everything ranging from Greek Mythology to Lord of the Rings. Three Kingdoms is the first entry in that new direction, visiting Ancient China for the first time in franchise while adding elements from the Romance of Three Kingdoms for a decidedly more epic and personal experience.

Taking place in 190AD, 3K starts shortly after the Yellow Turban Rebellion causes the fracturing of the old Han Dynasty, causing every warlord, administrator, and general in China to act as their own little country. Rising up to arms either for or against the crumbling Han, these people seek to unite China and crown themselves Emperors in the process. 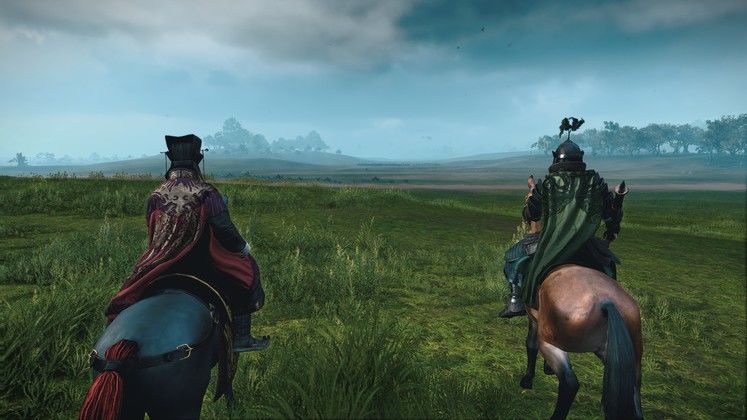 That’s the basic premise of Total War: Three Kingdoms, the newest entry in the historic Total War franchise 100% inspired by an embellished account of a real Chinese period. The game features 12 different protagonists, each with their unique factions, units, buildings, and abilities, and each has a backstory and preferred playstyle. That enormous asymmetry not only lends them a personality, but also gives players a vast array of choice as to how aggressive or diplomatic they want to play the campaign based on the faction they choose.

The first and most important aspect of 3K is that it is a story about characters. Both on Romance and Records mode – the fictional and historical versions, respectively – they are the forces that move the world around them, serving as generals, administrators, and heroes, and there are hundreds of them. Each has a skill tree and an inventory comprised of weapons, armours, mounts, and more, and become more powerful as they level up in the course of their adventures. 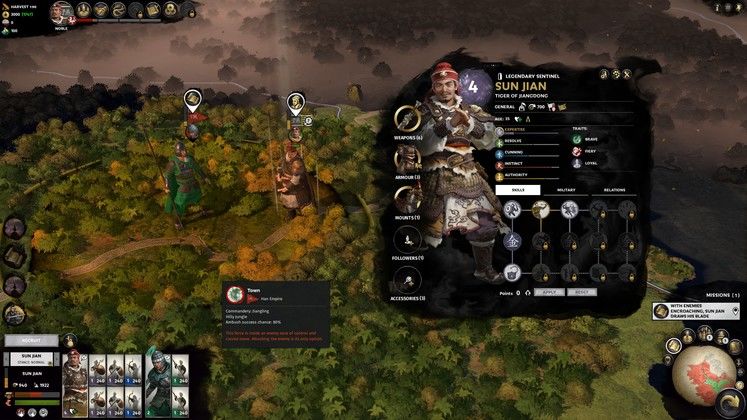 As a result of that new focus on individuals, armies have been expanded to house up to three generals with a personal retinue of six troops each, for a total of 21 units in the field. These retinues are loyal to their specific general and move armies and factions alongside their masters, creating an interesting bond that can last whole campaigns.

One problem with that new system is that it makes it impossible to transfer units between retinues – a problem further compounded by the fact each type of general can only recruit specific types of units. Each character in 3K belongs to one of six archetypes, such as the Strategist (who allows units around him to deploy in specific formations that were standard in previous Total Wars), Vanguards (great at tackling multiple enemy units), or Commanders (cavalry focused generals with area of effect abilities), among others, and each of those can recruit a unique selection of troops. Aside from basic early game militia troops, every single soldier in the game requires a specific type of general or rank, such as the Strategist’s unique ability to field Trebuchets. 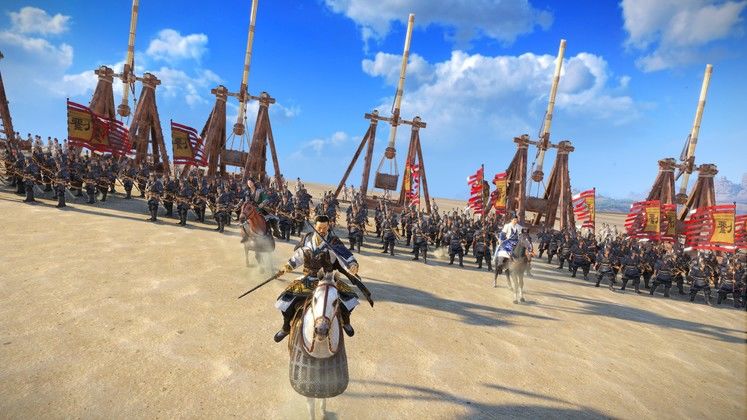 By itself, that aspect is only mildly annoying, but it’s made worse by the game’s tendency to dumb down the strategy for no reason. Units no longer have multiple special formations, like Rome II’s Testudos, Squares, Wedge, Diamonds, Spearwalls and Shieldwalls, among other special skills like Rapid Advance or even the basic loose formation. Instead, heroes get the brunt of the abilities, which tend to sound overpowered but don’t really work – an 100% ranged block chance buff resulted in my guys getting shot to death by arrows in more than one occasion.

Stupidly, the game wants you to use Strategist generals to enable a couple of formations, as apparently even highly trained elite soldiers can’t assemble into any way without an old guy giving them orders. Units in 3K are painfully boring, lacking any sort of tactical deployment besides depth and width, which makes battles rather uneventful and frankly, unnecessarily boring. 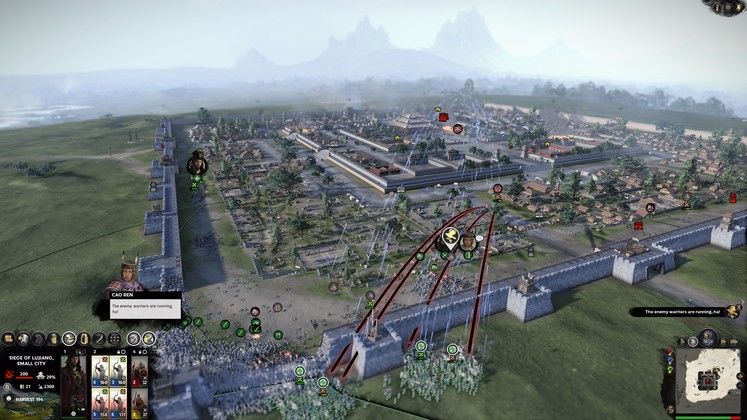 As physical presences in the battlefield, however, heroes are forces to be reckoned with. They can hold themselves either as part of a cavalry bodyguard squad in Records or on their own in Romance mode, able to single-handedly score hundreds of kills in the latter. They look normal and small in the scale of battles, yet make a major impact – a painful contrast with bow and arrow units, which fill the sky with thousands of very distracting blue magic-looking projectiles that literally blot your view of the battlefield, yet manage to kill only a handful of people per salvo. Arrows in 3K are pathetic.

More crucially, however, is how little difference there is between Records and Romance mode. Aside from the aforementioned unit of bodyguards for generals, the only other major change is how people get tired quicker in Records mode. It translates to almost zero difference in terms of playthrough, and it actually feels like historical fans are getting the shorter end of the stick – instead of heroes that can wipe out hundreds of units and duel each other in tactical engagements that change the balance of battle, you get subdued versions of those named characters who serve as little more than aura-exerting, ability-spamming units.

Performance is surprisingly good, and 3K continues Creative Assembly’s uncanny talent for environments and graphics. I remember being dumbstruck by the beauty of some of Warhammer’s maps, but 3K knocks it out of the park – the sky in one of the levels was phenomenal I seriously considered using it as a wallpaper.

Similarly, the art direction is surprisingly embedded in the game, going past the classic “period-specific art style” to fully embrace and encompass every aspect of the game. The reform tree has a fantastically gorgeous painting of a tree that goes from winter to summer as you unlock further techs, and selecting units in the campaign map briefly blotches them with a blot of ink as if briefly touched by a brush. In graphic terms, it is without a doubt the most beautiful Total War to date. 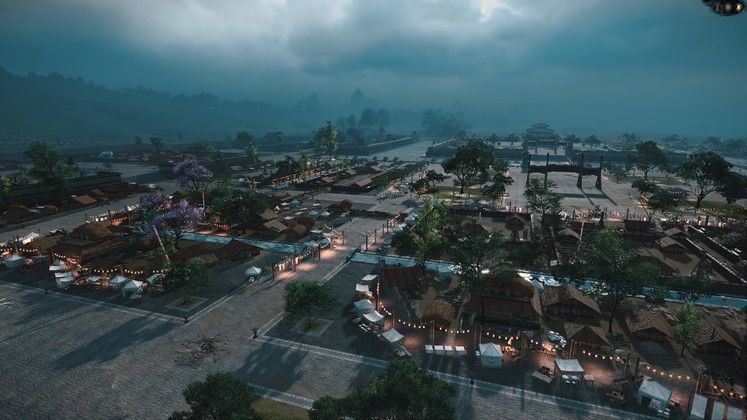 With all its flaws and strengths taken into account, Three Kingdoms is a very good game. It lacks in some areas, especially when it comes to strategic depth, but it is a very good entry that is miles above the horrible Thrones of Britannia from last year. If you are looking for the next Total War or just really like the Three Kingdoms period, this is the game for you.

Three Kingdoms is a good game, and it feels like relearning an old game – it sticks to the Total War formula, but changes so many things around that everything feels different.

Having three duels happening simultaneously in the exact same place, surrounded by 4000 soldiers fighting around them in a circle. 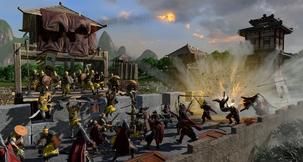