"We all make choices, but in the end our choices make us."

Given recent events it was rather hard to go into the second episode of Bioshock Infinite: Burial At Sea with an objective eye. It isn't just the last piece of DLC, it's the last time Irrational Games will ever visit Bioshock and the last game most of the developers at the studio will ever make there. It's their full stop on the Bioshock universe and Irrational's brief period as one of the biggest developers in gaming, so it better live up to both legacies. Fortunately for literally everyone, it does.

I said it with the first episode of Burial At Sea and I'll repeat it here: if you haven't played both Bioshock and Bioshock Infinite to completion (you can skip 2) do not consider playing this DLC or reading further. I'll keep spoilers for Episode 1 oblique if I mention them at all, but definitely Episode 2 should be the last Bioshock you play. Set in the first game's undersea city of Rapture not long before its total fall to anarchy and war, while in the first episode you played Rapture's version of Booker DeWitt here in the second you actually play Elizabeth. After making a deal with "Atlas" who's holding a young girl called Sally (that Elizabeth wants to save) hostage, she has to carefully make her way through the rapidly-decaying city and find the answers she's been seeking - although she may not want to hear them.


If you're a big fan of the Bioshock universe and are the type that likes drawing up all the parallels between Rapture and Infinite's Columbia, congratulations, you're in nirvana. All those little questions that have been nagging at you since you played Infinite or even Bioshock get answered at last (like "where did Vigors come from?", "who is the Songbird?" and "how did Elizabeth know what ammo to throw me?" amongst dozens of others), and extra twists you may never have even suspected keep popping up. The story is shocking (appropriately), sad, and ties the whole universe together in a very satisfactory way. There's still mystery (most notably the Luteces), but having finished Burial At Sea I feel like I've just slotted in the last piece in a particularly fun and complicated jigsaw puzzle and can finally and happily see the whole picture.

Which is slightly ironic given that Irrational have chosen to go with a nearly completely different gameplay style in Episode 2. While previous Bioshock games (including Episode 1) are very much in the First-Person Shooter camp, as you're playing the less-combat-experienced Elizabeth the focus here is actually on avoiding combat and playing stealthily. Irrational made several cheeky references to Thief in their marketing (and a certain major character actually calls Elizabeth "thief" at one point), which is a well-founded comparison since that's the game Episode 2 plays most like (with a bit of Dishonored since there are magic powers too). Since many fans have said they probably would have preferred the Bioshock games with less or even no combat I think this is a deliberate last-hurrah attempt by Irrational at giving those fans what they want. It's a risk and one I firmly applaud.

While there are guns in the game there's only a few (notably pistol, shotgun, and Episode 1's cool Radar Body Explodey Gun) and Elizabeth's pretty slow going with them, plus they make a lot of noise and call down other enemies to your location so they're best used as a last resort. You should instead be relying on Elizabeth's crossbow, with bolts for tranquiliser (usually takes down one enemy), gas (several in a small space), and alarm (to call enemies to one location, possibly for an ambush). Also her "Air Grabber" to knock an enemy out if you catch them unawares, but if they see you first you better either run or be prepared for a fight since enemies become a lot tougher to kill once they're alert.


As per usual with Bioshock you'll also have to rely on your Plasmids/Vigors a lot too, although there's only four this time around. Classic Possession is a godsend, Episode 1's ice-based Old Man Winter is useful, and there's two new powers more suited to the new stealth-based gameplay. "Peeping Tom" allows Elizabeth to see enemies and useful items through walls and turn invisible if held down, which was the Plasmid I used most, and "Ironsides", which is similar to Infinite's Shield, I didn't use at all. Fortunately there's no "Teleport" Plasmid or Dishonored might be having words, but the Plasmids are useful, fun, and keep Episode 2 feeling like Bioshock despite the new focus on stealth.

And it all works supremely well, luckily, and the game's systems have been well adapted to the new style. I love how if you hold on to Hooks for too long they noisily creak and give you away, and if you hold Crouch after you jump off them you land silently (jump, hold 'C', land behind unaware enemy, bash to the head, down, back to Hook - great). The level design is also excellent, with a number of major surprises in store (not least at the beginning) and with enemies liable to come from anywhere so you best be on your toes.

What Episode 2 often resembles in fact, and this was blatantly conscious but still great, is Bioshock 2's amazing Minerva's Den DLC. An excellent story with many twists of course, but also most importantly a non-linear feel. Yes there's somewhere you're supposed to go, but what if you went through that door instead? There's a whole massive location down there to explore, and another just as big through the door opposite! Yes a fair number of locations require you to venture there, but there are just as many you don't and you can explore them all in any order. After the slightly disappointing linearity of Infinite this is extremely liberating - there are a lot of doors in Episode 2 and for once very few are locked (and if they are you can probably find another way past them).


All of which tots up to a supremely satisfying conclusion to Irrational's Bioshock series. I'm struggling to find many real problems with it. I'm sure the stealth-focus will be a big turn-off for many Bioshock fans, but you can still use guns and Plasmids you just have to be a bit more tactical. Fair enough, there has to be a certain amount of leeway given to Irrational since Bioshock Infinite isn't a stealth-based game and they're cramming stealth systems into it, so it won't feel as good as something like Thief or Splinter Cell. Nevertheless it felt pretty darn natural to me, and I really know my stealth games. It perhaps could've been a bit longer too, but 5-7 hours for an amazing DLC expansion really makes the case for quality over quantity (and frankly that's a fine length for an expansion, I just didn't want it to send). I suppose it's also a bit of a bummer that there's absolutely no reference to Bioshock 2 (I guess Ken Levine's still a little sore about that), but just being like Minerva's Den is good enough for me.

Burial At Sea: Episode 2 combines a cool fan-pleasing story, enjoyable new gameplay (that you’ll wish Bioshock had attempted more), wonderful level design, a satisfying conclusion to the series, and I haven’t even mentioned how great Rapture looks and sounds. Irrational Games as a developer may have become unwieldy, but damn they know how to make a great game when they try. Episode 2 may be only 6 or so hours long but it does its job perfectly, and that job is sending off Bioshock (and Irrational) with style. It’s better than Episode 1, and despite being “just” DLC is still one of the best games I’ve played in a while (better than Thief for sure). If you’re a fan of Bioshock you’ll be crying by the end, simply because it’s over. You’ll be shocked at how great it all was.

The surprising beginning? The middle, with its non-linear exploration and him turning up? What about when you go there? Or the shocking end? All of it, frankly. 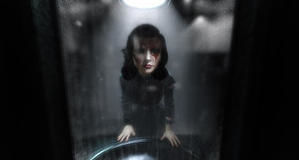