If asked to name a selection of my favourite games of all time, ones that I could still happily pick up and play for hours right now, the original Cannon Fodder would be on that list – and I know I’m not alone. Released in 1993 for the Commodore Amiga and developed by the UK’s Sensible Software, CF is an addictively simple real-time strategy game made before the genre even existed. You control up to four soldiers armed with machine-guns and some explosives and have to clear out each of the numerous maps of enemies. A nearly-forgotten sequel came out a year later, and now nearly 20 years on Russian developer Burut has taken a stab at a third game. But is it a General Jools or a lonely gravestone on Boot Hill?

Upon installing the game, I had a sinking feeling when I noticed the program was called “Connon Fodder”. Taking a deep breath, I plunged into what would surely be a dark smear on my childhood memories or a kick in the face for every hopeful fan of the originals. Upon being greeted by a cartoony and utterly unfunny CGI intro featuring big-headed soldiers my heart sank further. Then the hideous tuneless heavy metal music kicked in, bringing me in to a menu where I actually had to scroll down to see all the options. This was not a promising start.


Then I found that the loading screen was a 2D helicopter flying through a jungle, and later discovered that as soldiers die gravestones appear on the main menu’s background. All fans of the original left aghast by the bizarre trailer and the under-the-radar English release can now breathe a sigh of relief – this is Cannon Fodder. It’s got problems which I’ll get to, but it doesn’t soil the memory of the first two games – and even better, manages to update the series in decent, sensible ways.

While there have been changes, the underlying game is still the same as it was in 1993 – which is no bad thing considering the simplicity of Cannon Fodder is at the heart of its appeal. Holding left mouse fires your main gun, right click moves your soldiers, and then make your way through the map killing all enemies and destroying enemy buildings while watching your soldiers gain in experience. Sounds too simple? Not when your guys are just simple soldiers going up against turrets, guard posts, boats, tanks, and eventually even robots. Yes, CF3 does adhere more to the sci-fi leanings of Cannon Fodder 2 than the gritty semi-realistic first game. Which I don’t have a problem with, so you have to decide if you do – either way you won’t come into the sci-fi stuff until much later in the game.

The changes also don’t make that much of an impact on the Cannon Fodder formula, and even – shock! – improve on it. Anyone who’s seen the trailer may have been appalled by the health bars above every soldier, so yes, there’s no more one-bullet kills. However, the difference is minimal. You and enemies are slightly harder to kill, but an enemy soldier at close range will still cut your entire squad to ribbons within seconds if you let him. These health bars merely up the fun, and that’s no bad thing. And yes, I just did an entire paragraph explaining about why health meters are a good thing. Sheesh, nostalgia be a harsh mistress.


Special weapons like rockets or grenades are fired with Spacebar (rather than both mouse buttons like CF of old), which is a big improvement, although ‘Squad Management’ on G did strike me as an odd placement. I thought I’d be resistant to WASD as the (optional) movement keys, but I ended up actually preferring them to the traditional right mouse clicking. A quick spin on the mouse wheel brings up your weapons menu, as you can pick up several types of Special weapons and even different Normal weapons, all with pros and cons. Rifles are devastating at long range but terrible at close, and Flamethrowers are just as dangerous to you, for two examples. There’s 6 different Normals and 7 Specials to find altogether.

The biggest concession to modern audiences though is the use of a checkpoint system, where you can save at any time at little totem pole save points throughout the map. The purists can ignore them, but frankly they came as a big relief to me. Getting killed snaps you to the totem and brings in a fresh (but underpowered) set of recruits. You can properly reload these saves any time to get your more experienced soldiers back, but you’ll lose all your progress beyond the save. While these certainly make the game easier than its hardcore forebears it’s a better kind of easier, and while soldiers go up in Rank quickly (three missions and you’ll already be carting around four Generals) it makes the knock-back to lowly Privates all the more scary.

Objectives can be a bit more interesting this time, encompassing rescuing scientists or taking down a moving train, and can be accomplished in any order. Likewise while the maps can seem linear at first there are hidden paths all over the place and multiple ways to take on many obstacles, so thought has definitely been put into making the game more interesting than just clicking on things until they die. I underestimated Cannon Fodder 3 at first, then I discovered I could avoid the heavily-defended entrance to a base by simply blowing a hole in a quiet part of the wall. You can even, totally by your own decision, blow up a dam and watch it flood an entire section of the map, taking out any enemies or buildings in the way. It actually impressed me on many occasions, and that’s something I didn’t expect from “Connon Fodder”. It’s definitely fun and challenging, and quite sizeable too.

But despite actually being a fun, quite well designed game, there are undoubtedly problems holding CF3 back. Most notably and obviously, the translation is utterly awful. The script has probably been through Google Translate and performed by a group of English People who met the developers down the pub while on holiday. The lines are poor and the voice acting is worse, and this just kills any attempt at humour. I mean, clearly having a character called C. Oke was meant to be amusing, but the script fails to use it. Furthermore the story makes no sense at all, quickly moving between ever-so-slightly racist stereotype enemies in different countries without explanation – I suspect between-mission cutscenes are missing, which to be honest makes the game better.


Then there’s just patchy moments of game design which could’ve done with a polish, particularly vehicles which get stuck everywhere and are a pain to control. Sometimes you’ll chuck a grenade and it’ll explode on a bit of scenery right next to your soldiers, which is infuriating and happened to me far too often. There’s also no way to see your objectives mid-mission, so if it’s more complicated than “destroy everything” that can be a problem. The tutorial is the single most pointless tutorial in the history of gaming, giving you a shooting range which is almost out of range and then dumping you in a mission without any other assistance. The way the camera follows the mouse pointer can be utterly nauseating at first. Oh, and there’s supposedly multiplayer too but no one on the entire planet seems to be playing it.

Nevertheless I can’t say too many bad things about a game where, if there’s too much blood on the screen, windscreen wipers will pop out to wipe the blood off. I was expecting nothing but bad things from this title, and the first few minutes with the game did nothing to convince me otherwise, but in the end CF3 far exceeded my expectations. It’s got some problems and could really have done with more polish (particularly in the translation stage), but the fact is that Cannon Fodder 3 is a worthy sequel to one of the most addictive strategy games ever made. It may not have the catchy song, but war still has never been this much fun.

Discovering the windscreen wipers that appear when there’s too much blood on the screen.

- Thanks to GamersGate for giving us a review copy!

Nevertheless I can’t say too many bad things about a game where, if there’s too much blood on the screen, windscreen wipers will pop out to wipe the blood off. I was expecting nothing but bad things from this title, and the first few minutes with the game did nothing to convince me otherwise, but in the end CF3 far exceeded my expectations. It’s got some problems and could really have done with more polish (particularly in the translation stage), but the fact is that Cannon Fodder 3 is a worthy sequel to one of the most addictive strategy games ever made. It may not have the catchy song, but war still has never been this much fun.

Discovering the windscreen wipers that appear when there’s too much blood on the screen. 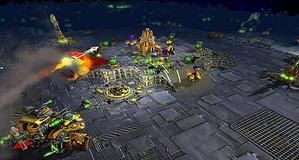