Is Colossal Order's city-builder a shining metropolis, or a smog-ridden mess?

Two year on and it’s still impossible to review a city-building sim without referencing the infamous SimCity 2013 launch, with its broken yet mandatory multiplayer, cramped cities and buggy, over-designed systems. It represented a failed attempt to turn the humble city management game into something it was never intended to be. Yet perhaps SimCity’s failure was in fact a blessing in disguise for the genre, because it’s allowed smaller studios like the nine-person team at Cities: Skylines’ developer Colossal Order to step out of the shadow of the most famous city-building franchise of them all, and go back to the roots of what made the genre so addictive and rewarding in its heyday; freedom, scale, and intuitive, satisfying construction mechanics.

Is Colossal Order's city-builder a shining metropolis, or a smog-ridden mess?

What’s immediately impressive about Cities: Skylines is the way it separates the fundamental mechanics of the city-building game into satisfying little bite-sized chunks; roads, whether straight, curved or free-form, can be lazily scrawled across the map, elevated if necessary to cross train tracks and rivers. Then, industrial, residential and commercial zones can be painted onto your city grid, leaving you to get on with other business as the appropriate structures slowly rise from the ground. It’s like watching your home-made bread rising in the oven, slowly morphing from a pile of shapeless mush into something delicious and tantalising. Yep, Cities Skylines is like home-made bread. You heard it here first. You get little tactile moments and systems in games that stick with you because they’re so inherently satisfying - Cities Skylines’ painting tool is one of these.

Rather than individual scenarios the game sticks to a kind of freeplay mode, so you sort of have to set your own goals, which are generally decided by the plot of land you’ve chosen. If you’ve picked an peaceful, arable area you can opt to create a bustling farming town, whereas if you find yourself with tonnes upon tonnes of surplus coal and oil, you’ll probably opt for a smog-ridden industrial noise factory, which will bring in lots of cash but make it a bit harder to attract tourists and educated yuppie types. Depending on how you choose to focus your industrial zones, they’ll shift visually over time to match – farming areas are all huge grain silos and open pens (sadly with no farm animals wandering about), while logging towns will be full of stacked-up lumber. 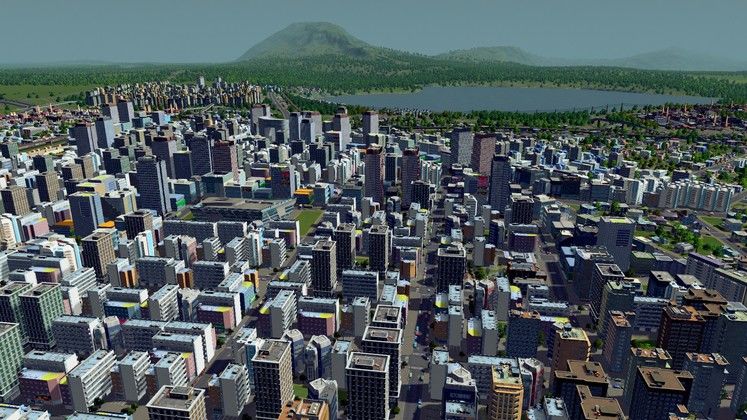 Here is a fully-functioning metropolis, beautifully laid out and running perfectly. Needless to say, I didn't build this. I stole it from Steam Workshop

Your industrial, residential and commercial structures will evolve over time too, starting off as depressing little shacks and upgrading as your city becomes ever more affluent. The models will change, and they’ll start to bring in more cash. This is all done automatically without your prompting; another way in which Cities: Skylines avoids fiddly micromanagement in favour of letting you get on with more pressing matters. Like making sure your sewage pipes aren’t placed upstream from your water treatment plant. Turns out civilians don’t like brown water. Placing your utilities, water pipes, power lines and so on couldn’t be easier, a visual overlay telling you exactly where the relevant resource is flowing, and which areas you need to connect. Hovering symbols above your structures give you quick and easy visual signifiers that clue you in on urgent issues – hovering skull symbols everywhere mean that it’s probably time to examine your healthcare system.

Every time you reach a population milestone you’ll rank up your city, from a little hamlet all the way up to a true metropolis. Each new level unlocks a new set of toys and features, slowly introducing you to more and more complex mechanics. Initially you’ll only really have to worry about providing enough electricity and water to keep your homes powered. After a while crime will become an issue, then education, traffic congestion and so on. Not throwing all this at the player right from the start is a smart move, and the progression system gives you a constant sense of growth and challenge – there’s always something new to master.

An achievement system keeps an eye on the way you’re developing your city, giving you access to unique buildings once you’ve satisfied specific requirements. If you’re running a modernised city with excellent education facilities, for example, you’ll eventually unlock the Hadron Collider monument, or a national Science Museum. These can be plonked down for a little extra visual pizazz, but they also keep your civilians happy and earn a nice little flow of cash on the side. Really, aside from the satisfaction of watching your city grow, this is the only impetus the game gives you to keep on going in a particular direction. Some players might prefer a more focused, goal-driven structure, but I think most will appreciate the way Cities: Skylines is content to simply give you the freedom and the tools you need to build, and let you get on with things. It’s the polar opposite of SimCity 2013 with its restrictive, cramped feel and unnecessary busywork. Lets drop a statistic here to illustrate my point; SimCity 2013 gave you roughly 2 kilometres of space on which to build. Cities Skylines gives you 36 kilometres. Filling all that space with a sprawling, functioning metropolis is all the motivation you need. 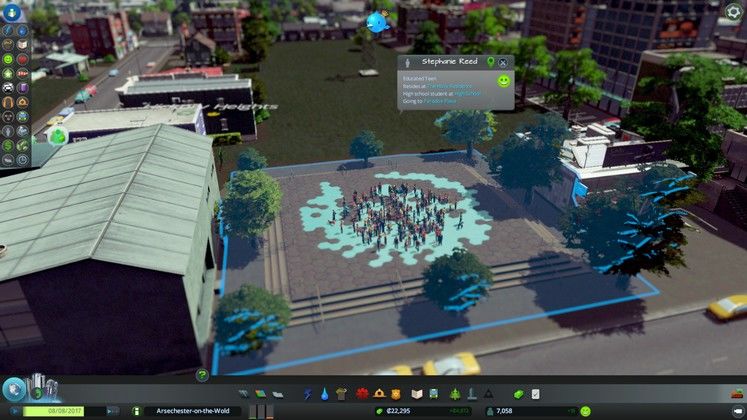 I have no idea what these people are gathering for. Perhaps it's a protest against the way I demolished a whole neighbourhood to build a lovely plaza

The Policies system lets you dig into the inner workings of your metropolis. You can issue these edicts at a citywide level, enacting policies like smoking bans and mandatory smoke detector installation, usually gaining a positive result at the cost of either some cash or a drop in happiness. Banning smoking citywide, for example, will improve health but make everyone slightly grumpy. What’s more interesting is the way in which you can use these policies to carve out distinct areas within your city. A district creation tool allows you to paint one area, give it its own name and then allows you to issue policies to that specific zone. Say you want to make a financial centre at the heart of your city; you can draw over your chosen borough with the district tool, name it New Wall Street or whatever, and then head into the policy menu to offer tax breaks for office buildings in that district. As soon as your bustling hub of capitalist pigdogs is well-staffed, well established and thriving, you can enter the district policy screen again and raise taxes, skimming a healthy profit. It’s a smart way of simplifying the management of a big city.

Visually, the game goes for a kind of model city look that perhaps lacks the gloss and building density of bigger budget titles, but makes up for that with oodles of charm. You can’t zoom right down to street level, but you can take the camera close in to watch your citizens wander to and fro from work or shopping, observe Colossal Order’s impressive traffic flow mechanics (these are the guys behind the transport-focused Cities in Motion series, remember) or just enjoy your bustling creation. A Twitter-style notification tab hovers at the top of the screen, dispensing tweets from your citizens that are often just amusing little observations, but also serve to inform you about what your population is happy, angry or concerned about.

For the most part the game does a great job of providing the feedback you need to keep your city running efficiently. There are a series of visual filters you can apply, covering everything from overall health to local wind speeds. Sometimes the feedback can be a little too vague – I managed to create some kind of ultra-virus at one point that wiped out a good 20,000 people, and I never quite worked out why my quaint, modest little city had given birth to the next Black Death – but such instances are thankfully rare. Notifications, hints and tips do a good job of making sure you don’t ruin your city accidentally. There’s no tutorial, but I think the game introduces new concepts steadily and carefully enough that you don’t really need one. 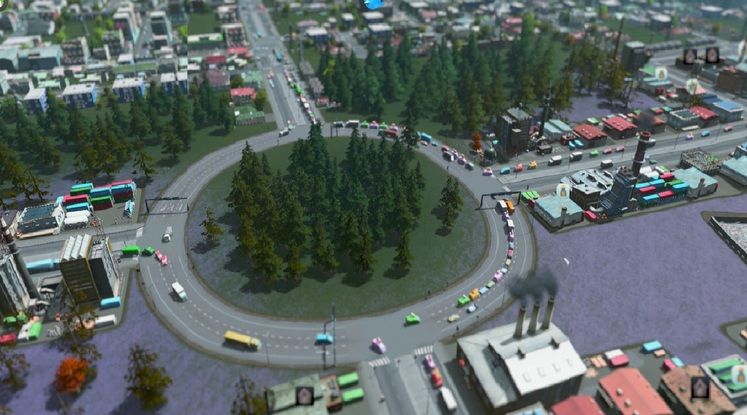 Even the worst, most congested intersections can be spruced up with a few well-placed trees

While I’d like a little more variety in buildings depending on location, there are at least a few photographic filters that are applied depending on the climate. Tropical towns won’t have Mediterranean-style soaring arches and red-tile roofs, but do give you access to different foliage types and a hazy, orange layer to the visuals. Given that the game’s published by Paradox, I’m sure different visual styles will be added down the line in some form or another.

After the massive disappointment that was SimCity 2013, and the smaller disappointment that was the recent Cities XXL, Cities: Skylines is a breath of fresh, unpolluted air. It’s a meaty slice of city management that hides its real depth with some impressively easy to grasp mechanics. That Colossal Order managed to out-SimCity SimCity with a team roughly a tenth of the size is pretty remarkable, and the obvious love for the genre the developers have bleeds through every aspect of the game.

There are a couple of notable omissions – it would be nice to be able to alter map terrain in-game, disasters aren’t included, and overall variety in building style is somewhat limited, but Colossal Order has already announced that it’s working to solve these issues post-launch, with tunnel roads and railways set to be added in the game’s first free patch, and more region-specific buildings planned for the future. Regardless, these are minor quibbles considering the wealth of content in Cities: Skylines, and that’s not even taking into account the addition of Steam Workshop support and easy-to-grasp mod tools, both of which will ensure a steady stream of content from the community. There’s already a decent roster of maps, ready-made cities, building designs and more to download, and the game’s not even hit the shelves yet. It’s a sign that Colossal Order cottons on to the reason people like these city-building games; they want freedom, not restriction, streamlined, easy to use systems, not needless complexity. In that sense, Cities: Skylines is a resounding success. In summary - here’s the city-builder you’ve been waiting for. Enjoy.

Once you’ve finished fiddling with utilities and policies, and set up your soaring commercial city centre. Just zoom out and admire your hard work.