First things first, I’d like to address the elephant in the room: yes, Combat Mission: Black Sea did actually come out in 2014. However, the fact that it’s being now released on Steam is opening it up to a new audience who, to be frank, likely would have never purchased or even seen Black Sea until now. The game has been gussied up a bit in the 6 years since its release as well, with manners of bugfixes and patches to smooth things out, so consider this an evaluation of the game as it is now. And boy, what a game it is! 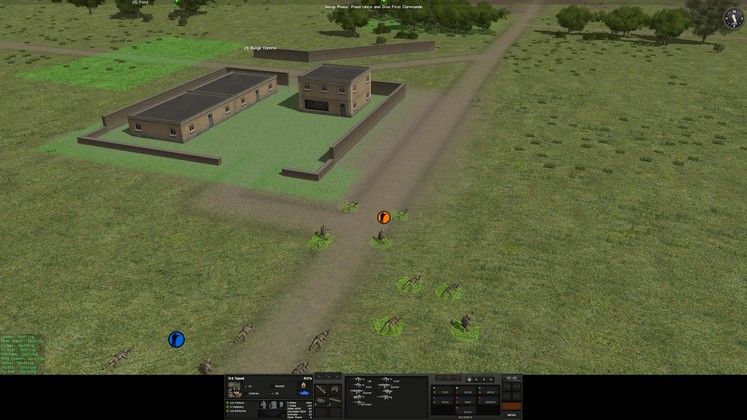 BY TANK INTO UKRAINE

So, let’s talk about the game itself. Black Sea is one of the more recent releases from the fine folks at Battlefront, whose Combat Mission series is one of the best examples of turn-based WEGO (both players give orders and all units move simultaneously) on the market now. In battle, you’re directing small to medium sized units around the Ukrainian battlefield, either as the Russians or a joint Ukrainian-US task force. Because oops! The game was put into development before the flare-up in Crimea back in 2014, and is set in an alternate timeline where the Russians invaded full force in 2017. There are multiple stand-alone battles or persistent campaigns you can play through as either side in the conflict, which have notable differences from each other, mainly that the Americans tend to be the best equipped, the Russians have the manpower, and the Ukrainians will hopefully have good defenses, wherever they sit.

The engagements you’ll get into feel very authentic and are all hand-built by the designers to fit a realistic narrative, so you’ll get missions to send out a patrol to collect information from an ambushed enemy convoy, to push forward to capture strategic buildings, or to hold your ground against an advancing Russian column. These missions have in-depth briefing, complete with analysis of the situation, your mission, and a suggested plan of attack (which as we all know, never survives contact with the enemy). So this all feels very good, but what about the actual business of fighting your fake little war? 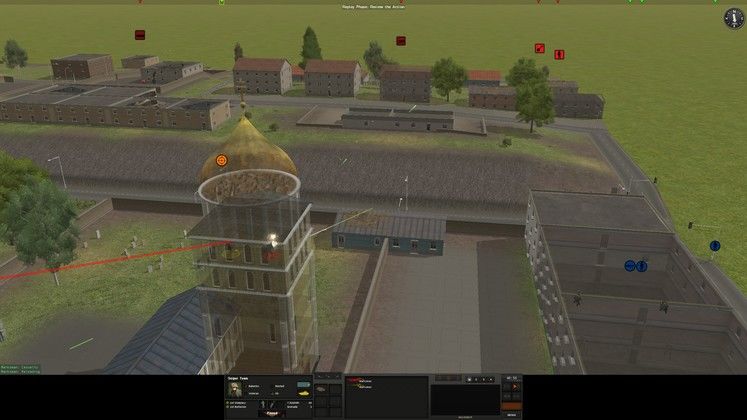 Well, I’m pleased to report that fighting your fake little war is very satisfying, but with a caveat I’ll mention later. Most missions will see you command between a platoon (about 3 squads plus a few auxiliary units) or a battalion (about 9 platoons plus their respective auxiliary units), and figuring out your plan of attack can take some time because you have a lot of options of even just moving, let alone directing firing arcs, determining preferred targets, whether you want the machine to deploy when they arrive at the waypoint, etc. This gives a lot of control to the player who wants to devise their perfect strategy, and it’s specific enough that you won’t frequently run into a situation where you want to do something the game won’t let you do. A typical mission could see you setting up 5 waypoints for a squad to follow, with new orders on movement speed and targeting at each, and hey, why not split the squad at waypoint number 4 to better be able to hunt down the enemy in that forest? You can also choose to play in real-time, but the game was built for players to issue orders and watch both teams move over one-minute turns, and I would advise sticking with WEGO. The battle-space changes fast, and WEGO lets you take stock of changes and adapt your plans accordingly; units will instantly respond to new plans.

Speaking of the units, your boys at the front have pretty smart AI. When fired on, they’ll duck and cover, and when shelled, they’ll split up while staying where they told you to as best they can. They’ll also automatically fire at things in range, and will prioritize targets that are the biggest threats first unless you told them otherwise. Set up properly, you can reliably tell a squad to hunker down somewhere with a good sightline and not worry about them for several turns, they’re pretty capable of taking care of themselves. These squads will all have their specific loadouts visible, along with their morale, training, level of fatigue, and leadership, which the discerning player should keep a keen eye on to maximize their advantage over their opponents. I’ve committed a fair amount of blunders in my playtime from not noticing that the anti-tank soldier was out of rockets, or that I had run my soldiers into the ground and they were exhausted and fighting less effectively. Such touches add to the complexity of Black Sea, but I feel that they make every win feel even more earned. It’s not an easy game. 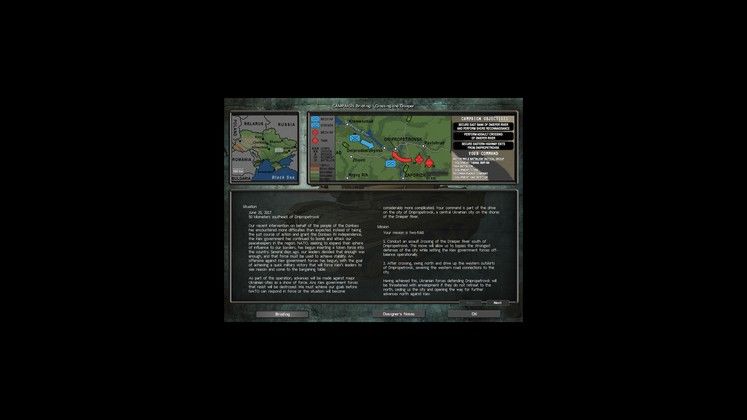 So, let me back up now, and talk about the concept of grognards, something not heard very much outside the wargaming community. The word “grognard” itself essentially means an old soldier or, in the case of wargames, someone who likes the more in-depth, crunchy, “hardcore” wargames, in the vein of Advanced Squad Leader, Gary Grigsby’s War in the East, or the spreadsheet heavy classic Rule the Waves. These are all good games, but can be intimidating, and generally offer a tough learning curve to handle. Black Sea fits into this box. It is a good game, but it is a game built by grognards, for grognards.

So what does that mean? Well, for starters, the game’s UI is… dated. And I’m not saying that the game looks bad, it’s fine enough graphically, it won’t win any awards for its looks, but it’s fine. But there are what us PC gamers would consider “essential” options now that are nowhere to be found. There are 4 resolution options, the highest of which is “desktop”, the next highest is 1280x760. There’s no windowed or borderless windowed run option, there’s not even a volume slider! For a wargame, this is par for the course, but Combat Mission is one of the more… modern wargames. This is the kind of thing I mean when I refer to “grognard” tendencies. 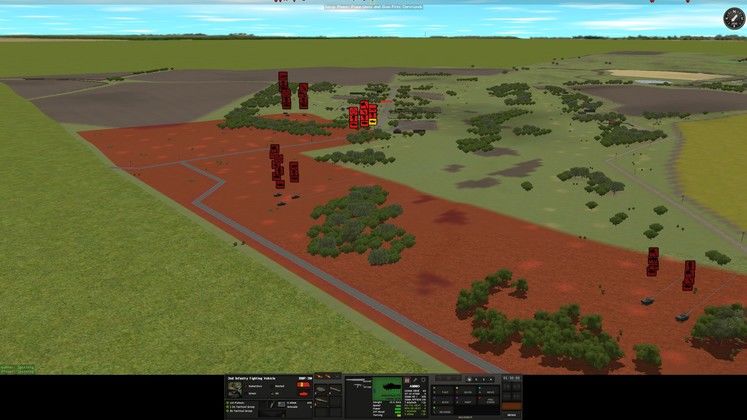 There’s also the tutorial, which is so emblematic of the “grogginess” of the genre itself. You boot it up, expecting pointers to appear on-screen, as any mainstream game built after 2005 would have. But nothing appears. That’s because you have to, and I can’t emphasize this enough, read and follow along in the attached manual PDF to have the tutorial explained. It’s 2021! Why!? While annoying, the lengthy tutorial does a pretty good job of explaining the core concepts of the game, movement, combat spotting, calling in fire support, etc., but still misses a few things, like explaining what the “hunt” movement does (they move slow and have higher spotting ability, to save you the trip to the wiki I took). There are also no tooltips to explain a lot of what you see, which is a real bummer, as reading back up in the manual is obnoxious. Nevertheless, all of this should help prepare you for your first battle. Should.

Black Sea is hard. There’s not any getting around that. Even after you play through the tutorial, when you jump into your first mission, the AI (or other player!) will probably eat most players alive, as even on the lowest difficulty setting, modern combat is very lethal. Sending an APC to poke around a treeline is asking for a rocket up its nose, and a squad in the open can be shredded by a single vehicle or emplaced machine gun. Mistakes will be made often, and you can only get better with practice, or by cheating like I did and reading up on modern small unit tactics, which helps.

After having played games for most of my life and reviewing them for a few years now too, I’ve started to get a feel for if a game came out exactly as its developers intended. You can tell when the game doesn’t align with the vision of the dev team, as the game will feel “loose” in points, not cohesive, having parts that don’t fully make sense with the rest of the game. The team behind Combat Mission: Black Sea knew exactly what they wanted to make, and made exactly that product. The result is a wargaming module that appeals greatly to people who like this exact kind of game, but doesn’t do much to lure in or be kind to people who might want to dip their toe into wargaming. It is, in essence, grognard game design distilled. If you’re new to the genre and want to pick up Black Sea after reading this, I recommend being patient and keeping an open mind. It’s a different beast to mainstream games, but is immensely rewarding with time. If you are a wargamer interested in modern combat, I recommend Black Sea heartily.

A well placed AA vehicle obliterating an enemy APC that peeked around a corner made me yell with victory. 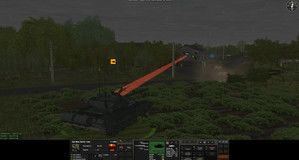