I’m in a Dark Souls state of mind

If you read my review-in-progress of Dark Souls III last week, you already know what I think of From Software’s latest. Completing the game has only solidified those opinions for me. It’s a terrific one of these, and if you’re a hardcore Souls fan, you should absolutely be playing it. In fact, you’re probably already reading message boards and debating your optimum builds.

I’m in a Dark Souls state of mind.

But here’s the thing–I’m not a hardcore Souls fan. The only other game in this series that I’ve played to completion is Demon’s Souls, and while I’ve played just enough of Dark Souls and Bloodborne to know what they’re about, I never got deep enough to parse to particular minutiae that makes each game tick.

That means this review is going to be for people still on the fence about the Souls series. A lot of this is going simply be a repeat of what I had to say last week, and I could go into a thousand extra words about the details of Dark Souls III, but the message ultimately remains the same. If you’ve ever wanted to try one of these games, this is a great looking, great playing place to start.

It’s good. It’s very good. It’s also very much a Souls game. That means that every foot of progress is a tense, cautious affair, requiring absolute composure and careful play no matter how many times you’ve been through an area. No individual moment is especially difficult. Once you learn the tells, you’ll be able to dodge that boss’s attack nine times out of ten. But that tenth time? You’ll get the life crushed out of you in a second. It’s punishing. It’s often frustrating. But after every death, you understand what you can do better next time. 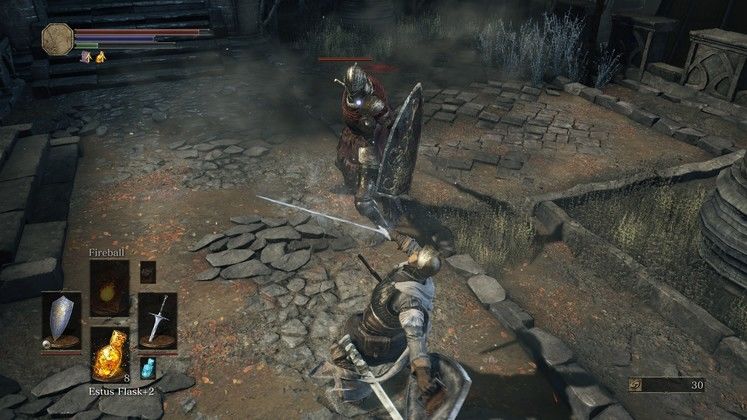 That’s old news to Souls fans, and Dark Souls III evokes all the feelings of triumph and tragedy that have made the series so popular. I’ve shouted obscenities at the screen after a sudden death and thrown my fist in the air after taking down a particularly challenging boss. The controls are tight, but each swing of the sword locks you into a given animation, meaning that you have to carefully plan your strikes to avoid counterattacks. Understanding the timing of your weapons and applying that across dozens and dozens of different enemy types is the core of Dark Souls III, and it’s immensely satisfying to do so.

Like I said at the top of the review, my Souls experience is minimal, but there are a few unique elements that differentiate this third entry. Here, each wieldable item has a skill associated with it, whether it’s a sword, shield, or casting item. Most shields offer a parry or bash skill, like they would in previous games, but if you choose to put magic or a weapon in your left hand, there’s a far greater variety of options. A waraxe lets you cry out and get a temporary attack-boosting buff. A miracle totem might give you a defensive buff. There’s a spear with a massive charge attack. These skills all consume both stamina–which quickly regenerates, as is par for the Souls course–and focus, which is essentially a mana pool, something the series hasn’t had since Demon’s Souls.

You can now choose to allot your Estus Flask uses between healing and focus restoration. Like Dark Souls II, you can get more uses of the flask by finding shards throughout the game, but now you’re forced to consider how much Estus you want to devote to healing and how much toward focus recovery. You can change that allotment at any time, but it adds a major consideration when you’re tackling certain areas, as a specific skill or certain type of magic might be more important to survival than a healing item. 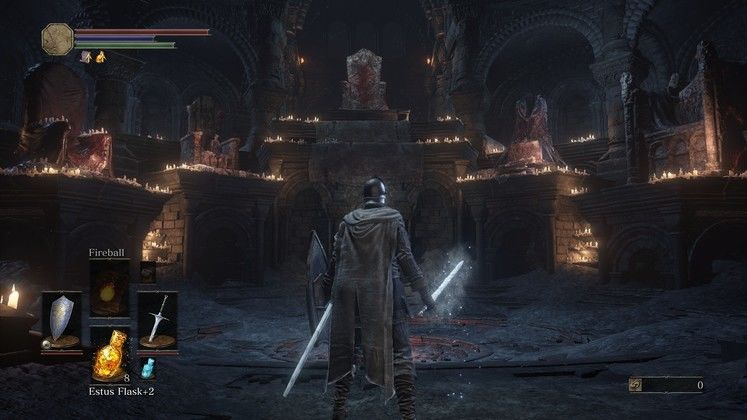 As always, Estus is restored when you reach bonfires, which act as both checkpoints and fast travel locations. They also feel oddly generous. Make no mistake, here–I died a lot in this game. But it feels like there’s far less space between checkpoints this time around, and it’s typically only taken me a handful of attempts to locate either the next bonfire or the next boss. There are exceptions, though, as there were certainly levels that were absolute nightmares, and turning the corner to find the next bonfire often felt like a divine gift.

The progression is fairly linear, with the exception of one Y-junction that splits off into multiple paths that each hit dead ends hours down the line, where you can only progress once you’ve followed both paths to their conclusion. The areas themselves are almost all massively open and loop in on themselves to reveal secret areas and alternate paths, but there tends to be a choke point at each bonfire, and aside from the one branch, the overall progression is in a mostly straight line. 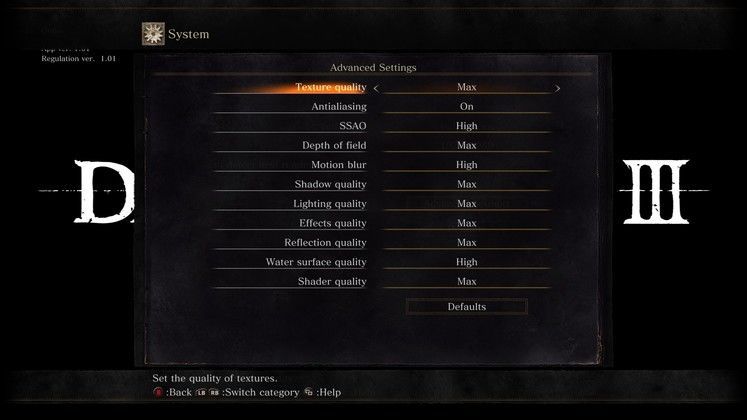 The PC version’s performance has been excellent

I ran into absolutely no major technical issues on PC. Granted, my review rig is a beast, with a 980TI, 16GB of RAM, and an i7 4790k. But it was a rock-solid experience, with nonstop 60FPS on max settings and zero crashes or freezes. One specific late game area brought the framerate down to 30, but that was the only instance of slowdown and there was little effect on gameplay. I also tested the game on a lesser machine running a 960 and an i5 2500k (right between the minimum and recommended specs), every area I checked held steady at 50-60FPS even on high. Oddly, the late environment that hindered the more powerful machine had no noticeable effect here.

The areas look terrific, though they’re mostly still painted in the greys and browns of medieval fantasy. But there are exceptions. You’ll occasionally see massive vistas that are positively breathtaking, and while you’ll spend most of the game walking along fortress stonework, that makes the few forays into more natural environments and some nearly mystical-looking environments stand out all the more. It’s definitely Dark Souls in look and feel, but it pulls in elements of the more surreal fantasy of Demon’s Souls and even some bits of the ornate, post-medieval aesthetic of the early parts of Bloodborne. There’s one level in particular that felt like it might just be the outskirts of Yharnam.

If you’ve never played a Souls game, you still probably know one thing: They’re hard. Bandai Namco’s “Prepare to Die” marketing campaign centered that in the gaming consciousness. But that reputation does a disservice to what these games are actually about, as it paints a picture of infinite frustration, with unfair odds and enemies placed very specifically to cause deaths you have no way of predicting. 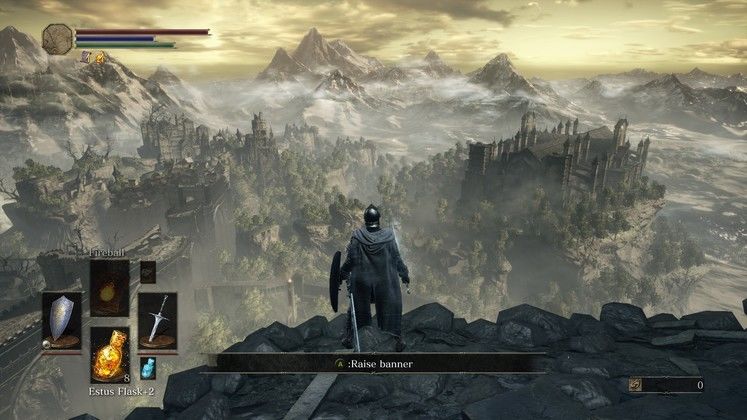 You will certainly die many, many times in Dark Souls. But after each death, you will understand exactly what you can do better next time. It might be the order in which to take down a group of enemies. It might be which attack leaves a particular foe open to counters. It might be whether to block or dodge a given attack. Sometimes you’ll immediately get every facet of a given encounter. Sometimes it will take a dozen tries before you hit on the right strategy.

The incredible thing about Dark Souls is that no matter how frustrated you get, it still feels like you’re always on the verge of a breakthrough. Beating that boss is just one more well-timed dodge away, and every victory feels not like a lucky break against impossible odds, but a hard-won fight you’ve spent the whole game training for.

Is Dark Souls III great? Yes. Is it better than its predecessors? That’s a debate that Souls fans are going to be having for years to come. Everything the previous games did well, this game does well, and the differentiator will be the game with the most varied character options and unique environments. If you’re a Souls fan, you should play this game, and if you haven’t yet dug into this nightmarish world, Dark Souls III is an excellent place to start.

Dark Souls III will be released on 12th April priced at £31.99 on GamesRepublic. If you pre-order today you’ll receive 20% off and a free copy of This War of Mine.

Beating the most difficult boss in the game. That moment will be different for every player, because the relative challenge of those bosses will be different based on your character build and your strengths and weaknesses as a player. For me, the killing blow on the Abyss Watcher was the breakthrough moment where I knew I could take on anything. 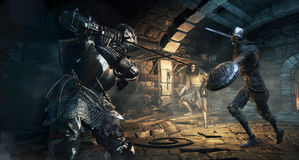