Can lightning strike twice? It can if it’s powered by whale oil

Dishonored was a very special game that very nearly took our Game of the Year in 2012 (losing to the sublime XCOM remake which is no bad thing). Developer Arkane created a game that was both a loving homage to the Thief series and a wonderful update to the medieval/fantasy stealth game with a massive shot of Deus Ex. Yes you could play stealth, but you could also run in like a sword-waving magic-throwing maniac and have just as much fun. It was so good the real Thief’s return seemed empty by comparison. Now finally we get a sequel.

It’s been 15 years since Corvo Attano cleared his name, stopped a conspiracy, and returned to the role of Lord Protector under the new young Empress Emily Kaldwin, his daughter. Unfortunately the nefarious Duke Luca Abele from Serkonos (Corvo’s home country in the south) and witch Delilah, last seen in the DLC The Brigmore Witches, have other plans. They stage a coup, ascend Delilah to Empress, and force your player character to flee Dunwall for Karnaca, the capital of Serkonos. The storyline is pretty straightforward but works well to set things up, although anyone who hasn’t played the two Daud-based DLC expansions will be a little left in the dark as the plot references them a lot. Clearly Arkane have been visiting the Bioware School For Sequel Plotting To Screw Over Anyone Who Just Wants The Main Game.

If there’s one initial disappointment I had with Dishonored 2 it’s the choice forced on you in the beginning. This time there are two player characters, Corvo (who plays much as he did in Dishonored) and Emily (a little more stealth focused with different magic abilities). I presumed before release that we would be able to go between the two during the game, but instead you have to choose one at the start and you’ll stay with that character the entire game. So basically it came down to a choice between a brand new character with brand new powers, or Stephen Russell. For a Thief fan like myself, there was really no choice other than the sneaky guy who voiced Garrett for the three best games in the series. 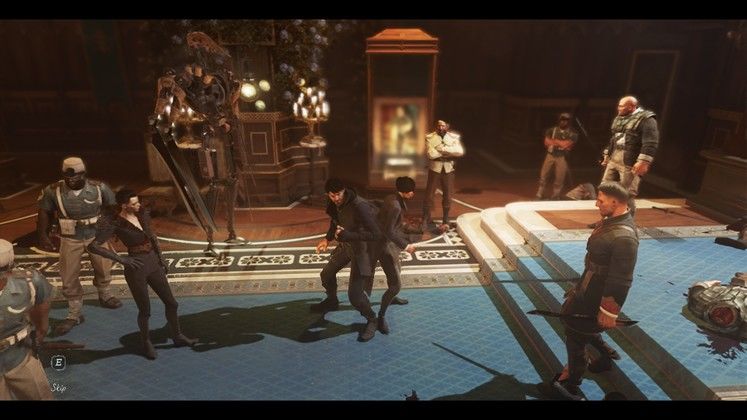 The Thief or the Empress?

The varied gameplay is what made Dishonored so compelling, and it’s been further enhanced to perfection in the sequel. While ostensibly a stealth game where you sneak around parts of the city of Karnaca searching for your goal and how to accomplish it there is a lot of freedom with every part. Not that fond of stealth? You can use a range of combat skills and magic powers to zip through murdering every guard and then explore at will. Don’t want to kill anyone? You can knock out or evade literally every character. Want a pure stealth or action experience without fancy magic powers? You can tell the mysterious Outsider who gives you your powers to f*** off and play the game powerless.

This freedom goes for objectives too. If you can’t get somewhere, like a locked door or electrical Wall of Light, nearly every time there will be another way through that obstacle. Every target can either be assassinated or “removed” in a non-lethal but equally traumatizing manner. While all of these things were in Dishonored they have been perfected in the sequel. I felt with the original that Arkane were experimenting a lot and didn’t really tailor the levels accordingly beyond a few options and stealth gameplay, with powers and an assault-focused play allowing many gamers to bypass most of the level since the design didn’t think about them much. The “non-lethal” assassinations felt particularly late introduced since the game always assumed during plot moments that you’d killed your quarry. 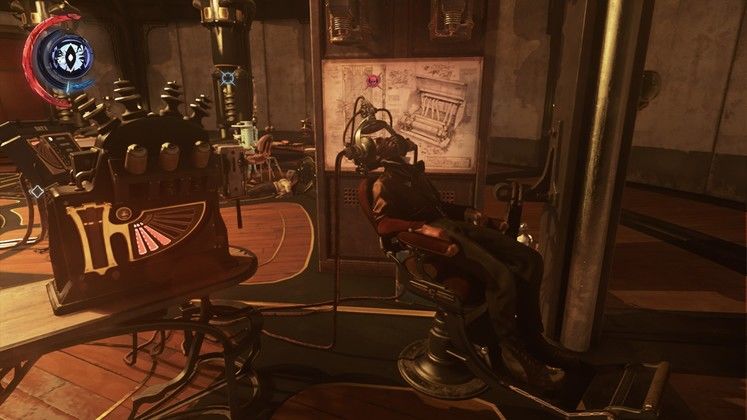 Dishonored 2 is far better designed in every aspect. Lethal assassinations of targets will often require planning but still end up easier, but non-lethal “neutralizations” will require eavesdropping, exploring, buying hints and other malarkey and could possibly yield greater rewards. Stealth is deeply satisfying, and despite not having the shadows=invisibility mechanic most others go for it’s well coded and feels like proper Thief at times. Action is similarly now, at last, excellent and tougher, with new hardware allowing dozens of enemies on-screen to attack you at once and more challenging enemies like witches and the amazing Clockwork Robots really forcing you to keep on your toes. The powers are really just the icing on the cake, and compliment both styles excellently should you choose to use them.

Just don’t forget to explore your surroundings. The levels themselves are wonderfully designed and are up there with the best Thief locations. The first two Thief games are praised for providing you with a huge, detailed place and allowing you to make your own way through them. The Thief reboot got this wrong and went too linear, but fortunately Dishonored 2 gets this right and then some. While it isn’t open-world and you can’t go back to old areas (another of the few disappointments in the game) the levels are pretty free-roaming and with so many ways to complete them. 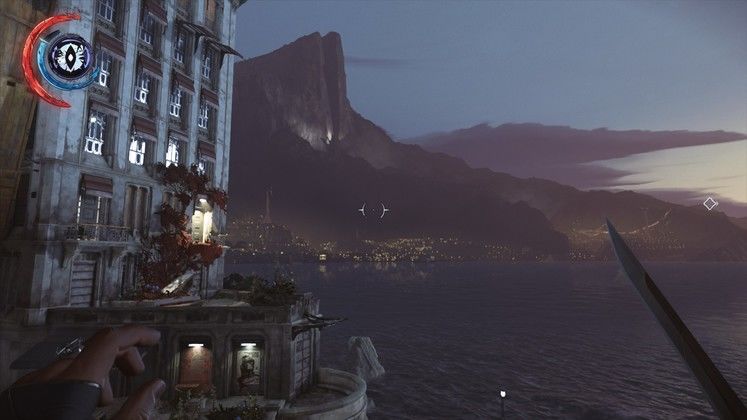 I was really exploring and I still know that I missed entire swathes of the game. Better yet, the variation in the levels is superb. Each part of Karnaca feels unique enough, but things get even better once you ride the rail to an actual place. How about a museum filled with ghost dogs and witches with similar powers to yourself? A puzzling mansion where rooms can change at the pull of a switch, patrolled by giant Clockwork Robots? Or a manor where your powers are disabled and instead you get to travel backwards and forwards in time? They’re all insanely imaginative, force you to play with your abilities and make you think outside of the box. All its missing is a scary level set in a haunted asylum and the game would be perfect.

Woo-boy, right then, Performance. Since its release Dishonored 2 has gone down as an incredibly badly optimized game, or “a buggy mess” as we called it. The game is sitting on a ‘Mixed’ rating on Steam due entirely to how badly it performs on a great deal of systems, even those seemingly higher than the Recommended specs. Unfortunately our own performance test on my personal PC with an AMD FX-6300 Six-Core Processor, 16 Gb RAM, Nvidia GTX 960 4Gb, and Windows 10 64-Bit (which is actually below Recommended specs) didn’t encounter any problems at all even when running the game on TXAA and Ultra settings. Indeed the only slowdown we encountered came with opening menus and slow loading times, particularly when starting the game. 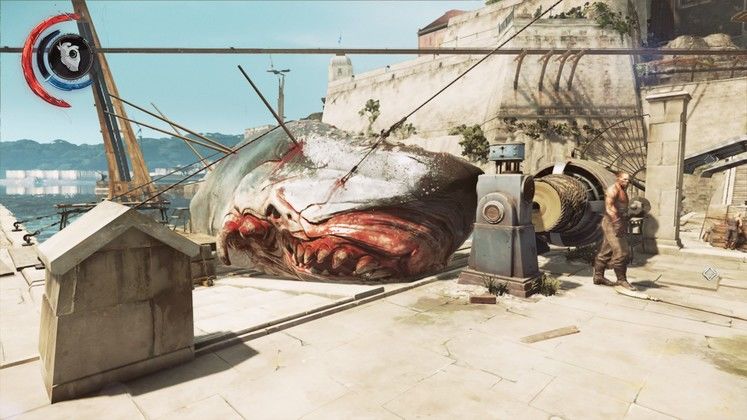 Everyone uses this dead whale screenshot when talking about performance issues for some reason...

While we won’t be docking any points off Dishonored 2 for the Performance issues people are having, especially as we couldn’t replicate them, be aware that they do exist and it might be worth waiting on a patch if you haven’t already purchased the game. However if you want to take a risk by all means give it a go since clearly not everyone is having these problems.

Graphically the game does look pretty nice, although I’m going to have to go back to the original again because to my eyes it all looks much the same. It’s even still got loading screens separating up levels. The locations are certainly a lot bigger with more people around, but it’s the excellent style the Dishonored universe has that makes it so nice to look at – and this offers just a slightly more detailed version. Deus Ex: Mankind Divided certainly looks nicer and does a more cluttered, believable city anyway. 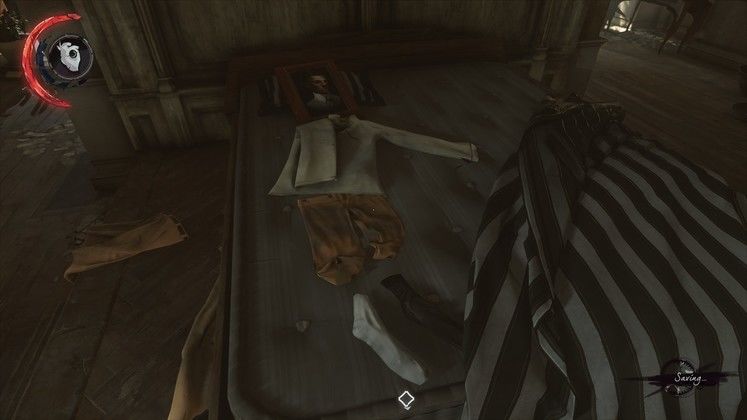 Some of the nicer clutter.

So I loved the stealth, I loved the action, I loved the choice, I loved the level design… was there anything about Dishonored 2 I didn’t love? Well, kind of, yes: the AI. Now, don’t get me wrong, it’s actually good in many ways. Guards can actually be quite unpredictable in their movement patterns and often don’t have an obvious set path, furthermore when they get into fights a couple will come at you with swords while most will sensibly keep their distance and shoot at you. Dogs have a sense of smell, witches can teleport, and the Clockwork Robots are just great – I love how removing their heads will make them rely on audio only, so woe betide anyone coming within earshot.

However the one thing that the AI is bad at is staying alive. Trying to do a non-lethal playthrough is hard enough without enemies who’ll shoot each other aiming at you, “accidentally” cut down anyone you’re attempting to choke out, or just run headlong into open flames and hideously burn to death. I’ve seen all of these multiple times. I’ve even had NPCs die randomly off-screen for no apparent reason. Still, it’s pretty funny though. 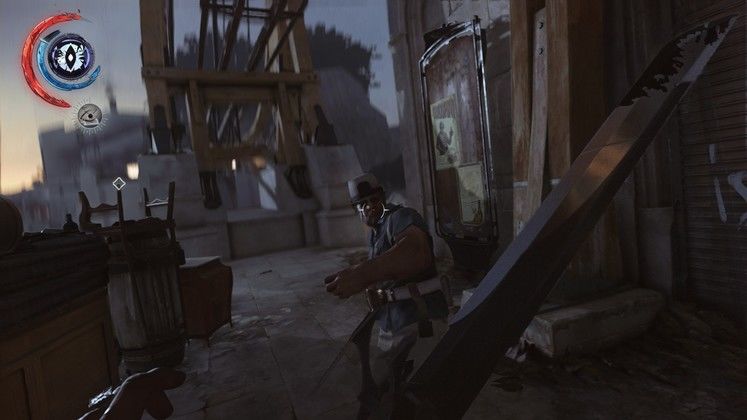 It seems a little childish to complain about this but it has to be mentioned since it certainly disappointed me, I don’t like how the city sections feel like levels. Karnaca never feels like a real city that you’re exploring, since you can’t travel between areas, lots of it is locked off, and there aren’t many civilians wandering about. I love the actual mission locations which actually do feel believable, but anytime you have to navigate Karnaca to get to one of those locations the game feels far more artificial, with loads of barriers getting in your way. Would I have preferred a proper giant city hub? Maybe, but I probably would’ve preferred just a load more cool missions instead. I like the option of being evil and raiding the Black Market though.

For a while I was trying to work out whether Dishonored 2 was a great game because it’s just more Dishonored, or is it actually better on its own terms? A large portion of what makes Dishonored 2 such a compelling game is indeed down to the foundation, but overall yes, it is better than Dishonored. The storyline has less twists but is much more compelling, the choices are much wider and more open so each one is equally satisfying, and most importantly: Dishonored 2 has some of the best level design of any game I’ve ever reviewed.

Every mission location has been carefully crafted to allow free gameplay decisions, whether you want to go assault or full ghost stealth, feel believable, and be incredibly fun no matter what. Enemies offer a challenge (except when they’re burning themselves to death), there are plenty of secrets, and there’s a lot of replay value even before the promised New Game Plus mode. You can blitz through in 5-7 hours or like me you can try to see everything and take 20-30 hours, and you’ll still have another unique character to try after the credits roll. It may feel like just more Dishonored, but Arkane have improved everything they could’ve and made a truly satisfying sequel. We just hope it’s not the last.

Either the breathtaking Clockwork Mansion or the amazing time travel mission, which I want a whole game based around. 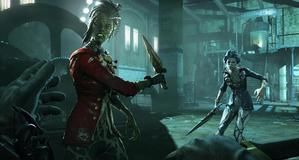