Can Emperor scratch that seven-year itch? 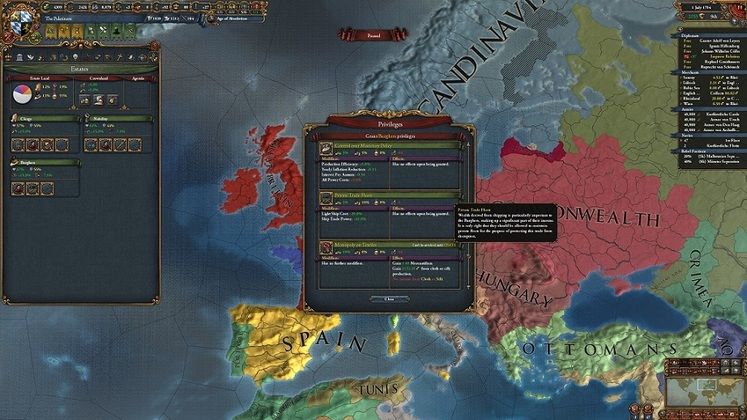 To begin this Europa Universalis IV: Emperor Review we’re going to talk about the free features that are available to everyone. They include too many minor changes to go into but a lot of new mission trees for mostly European nations have been added, which we always appreciate.

The reworked mercenaries seem like a good idea, with various companies reminding us of the Crusader Kings system. We did notice that the AI struggled to use this new mechanic when very rich countries sometimes wouldn’t use mercenaries, even when losing a war. For me this was war against the Netherlands, who had 5x my income but sat placidly on a huge war chest as I marched my forces on their capital.

Estates also see a major rework with them still controlling lands, but now this is done indirectly as a percentage rather than holding specific provinces for bonuses. It’s still just a balancing game though - nobles are at this loyalty, clergy at this much, and if we choose this it’ll balance them out… rinse and repeat and we found no need to consider the flavours of any text. That said, we do like the new Privileges that offer the player a choice of bonuses to pick and choose from for each estate. Some of these are fairly basic but others are game changers, and many come with tradeoffs to keep in mind. Overall, we’d say it’s an improvement over the previous iteration, but we do miss being able to hobble estates by ignoring them completely.

State Limits have been replaced with Government Capacity, although with this build the game balance seemed to favour letting us expand without worrying about it. Even with a decent sized nation (bottom of the Great Powers) we rarely went above half of our capacity, though we do prefer it to struggling against the State Limit from previous versions.

Base players now get access to Government reforms introduced in Dharma with extra options for those who own that DLC or this one, but the basic features of it are there and will add a nice little addition to the game which brings some small bonuses and gives a small sense of game progression. Reform points are also used to increase Government Capacity if you need it.

As a side note for the free features, we really liked the inclusion of a “Go To” button on events and the addition of a few new manufactories. The new manufactories include ones that increase manpower or sailors that gain further bonuses based on the trade good in the province. This is a really intuitive system and works well. 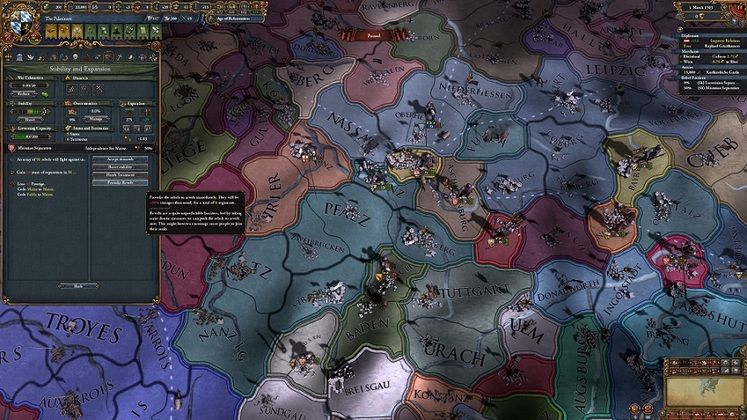 The paid features are a bit of a mixed bag. If you’re a Central European player they definitely add a lot of flavour to the experience in the form of even more new mission trees and events, but many of the main features also seem to be solely flavour based.

The Council of Trent lets Catholic rulers vote on various policies in how to deal with the Reformation, allowing it to take root or giving some nice bonuses to fighting it. This comes with a disadvantage of spiking intolerance and really hurting your income until the reformation has been beaten, but it’s still just a handful of decisions and doesn’t effect how you choose to play at all.

The Imperial Incident system really doesn’t feel like much either. While playing we noticed around one every hundred years and they were all really quite meaningless where we hoped they’d be challenging. During our play we voted on all three and couldn’t care less if we’d won or lost any of them. They’re basically a normal event where a HRE majority decides the path, and the results are pretty irrelevant.

The ability to provoke rebellions is useful - super useful. It lets you move your stack in advance and trigger a rebel uprising if it has more than 50% support. But… it increases their size by 50% as well. Rebel mechanics haven’t really ever felt right. feeling like a lazy way to add some balance to expansionist empires, and it irks even more that making rebels spawn before they are ready increases their readiness. It would be much preferred if the rebellion spawned at the percentage strength they had when they were provoked, and think that this action should cost something to the player.

Imperial Reforms now take a branching path towards Centralisation and Decentralisation. In our game this has meant nothing, and as we’re used to seeing in campaigns, the HRE seems just as toothless and inefficient as ever - although we suppose as the player you could gain the throne and push through what you wanted…

The Hegemony status for Great Powers has some amazing bonuses available but as they require you to not only be best-in-class but also to have such a staggering minimum (military hegemony requires a million men to trigger) that by the point of getting it, it’s basically worthless. 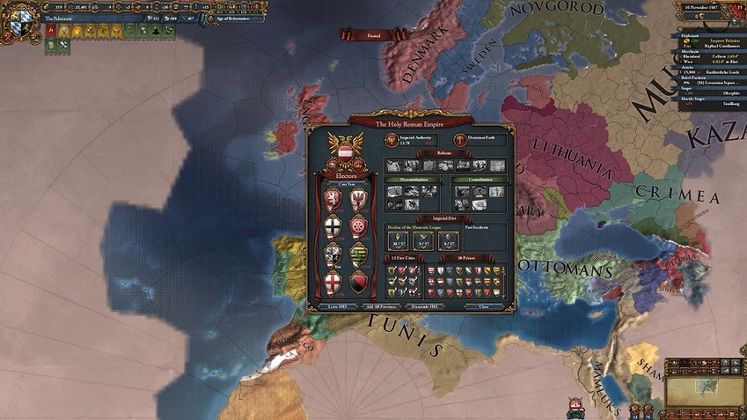 We managed to get to about 300 years into the game while reviewing it, and didn’t encounter a single revolutionary nation. As such we haven’t been able to review that feature at all, but having them every game could end up being tiring.

We have noticed a fair bit of weird AI behaviour in the patch. We’re willing to bet that’s to do with the review branch and won’t be present in the main game, but it was very annoying watching Great Britain declare war and then not move their troops across the channel even though they were moving the transport fleet to the pickup provinces… or the time when they racked up 30,971 ducats of debt while having the highest income in Europe…

Check out our Steam Sale 2020 Schdule to see when Europa Universalis IV: Emperor might be coming up for a discount on Steam.

Europa Universalis IV has been out for going on seven years, and with that comes the seven-year itch. I’ve been a long time fan of the game since its release and it’s my most played game on Steam by quite some ways. Emperor sees a lot of changes, both in the DLC and the free patch that accompanies it, but despite all this, many of my underlying complaints with the game persist seven years on. If you’re a fan of the franchise, this patch is one of the best, but it’s probably only worth buying if you’re a central European player. 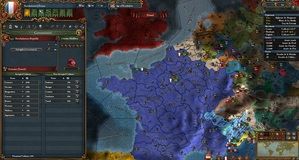