There's no 'I' in wingmen. Oh alright, maybe there's one

It's no exaggeration that since the heyday of the mid-to-late 90's the space dogfighting genre has fallen by the wayside a bit. Luckily, GoD Factory Wingmen by Québec-based developer Nine Dot Studios, has popped along to make us remember why shoving a blistering volley of missiles up the tailpipe of other space craft was such an entertaining prospect in the first place.

A muiltiplayer-focused effort that places a staunch premium on teamwork, GoD Factory Wingmen embraces a more arcade-style approach along the lines of the recent Strike Suit Zero than a bespoke, unapologetically in-depth space sim such as X-Wing Vs Tie Fighter. Simply, the player is never concerned with the minutiae of their spaceship, such as redirecting power from the toilets to the shields for example, but instead more on the actual act of getting out into space and blowing their foes to smithereens as quickly as possible.


Where GoD Factory Wingmen differs most significantly from others of the same ilk though, is in the objective-based sorties that form the backbone of the game's experience. The goal for winning each game is both simple and singular; one side must destroy the space carrier of the other.

Achieving this, as one might expect, proves easier said than done.

Take out the radar for example and enemy ships will have their own, on-board radar systems compromised with a much shorter detection radius. Conversely, laying down a pounding on the docking area will result in enemy craft no longer having a full set of shields when they swoop in to restock and take a breather. The presence of such strategic opportunity proves to be a welcome one as players are empowered with the sort of creative latitude to approach each battle that other games in the genre might typically ignore.

Being a pro-active fighter pilot and ploughing into the enemy carrier and its associated entourage is just one way to win any given encounter; another, is to sit back and just let those big hulking lumps of metal punch city block sized-holes in each other with their main cannons. The drawback to this otherwise ingenious plan, is that each cannon fires every three minutes and in doing so, deducts an integrity point from the opposing ship in the process, ultimately resulting in a draw. Furthermore, if players choose to attack the main cannon of the opposing ship and destroy it, this in turn increases the firing interval to five minutes; lending the home team a tangible advantage should the battle end up going the distance.

In a fashion, the main cannon effectively puts a soft cap on the time of every battle since regardless of the outcome, one or both ships will be destroyed. In the case of the latter, the victor is distinguished by the number of enemy support craft that have been vanquished. It's a gameplay feature which adds extra depth to a game which already performs above and beyond what its taut space-shooter veneer might otherwise suggest. As for the ships that facilitate all this shooting and flying about, the game does an admirable job in showing players the ropes early with a robust tutorial that covers everything budding pilots need to know in advance of their first battle.

After the tutorial, players are offered an initial choice of two ships from a quartet of different races; Human, Gauntris, Arblos and the Chorions. Aside from a wide range of differing aesthetics, each race also imbues a number of strengths, weaknesses and unique abilities into each craft. Human spaceships for instance are fast, agile and boast a decoy ability which handily creates a clone of their ship to confuse and stymie potential aggressors. The Arblos on the other hand, craft ships that while slower, pack far more of a punch and can teleport long distances.

These ships aren't just varied for the sake of it either, as each ship provides a broad canvas to accommodate the unique strokes of a multitude of different play styles. Whether you favour a more tactical and agile approach to combat or a brute-force, armed to the teeth route to victory, the game has you adequately covered.

For those who might be troubled by the notion of how well the developer is able to balance these ships, protracted play soon reveals a comfortable truth that each ship holds no overwhelming advantage over another. Indeed, where ships are of equal grade, player skill and awareness of a given craft's capabilities almost always proves to be the deciding factor in any given space scrap.

Through the purchase of new parts and equipment, paid with credits earned from each battle, players are also able to augment their existing abilities of their ships with a range of shiny new upgrades. Annoyingly though, the lobby system does not presently allow ships of the same class and quality to compete against each other, so the sad rule of thumb that I have encountered in a few games, was that the team with the better quality ships were usually synonymous with being on the winning side also.

Hopefully, this is something the developer can address in the near-future as such a lopsided system stands at odds with the skill-focused gameplay which is otherwise wholly embraced by the game.


Elsewhere, another fashion in which GoD Factory Wingmen innovates is in a nifty little feature that allows players to use ships of other team members, pending their agreement. Standing as yet one more instance of the developer stretching farther beyond the established tenets of the genre, the ship-sharing feature beautifully compliments the other gameplay flourishes that exist. In enabling a team of players to co-ordinate attacks using distinct and very deliberate types of craft to carry out carefully structured stratagems, ship-share seems like the sort of organic gameplay feature that we should have had all along in these sorts of games.

Arguably, the key to success in GoD Factory Wingmen lies in effective teamwork underpinned by a deep understanding of the tactics and idiosyncrasies of each ship in the game. The attractive star-fields which serve as the backdrop to the game's interstellar dogfights are no place for lone wolves intent in pursing their own agenda. Certainly then, like the Battlefield series and all other games that reward robust teamwork with success, Nine Dot Studios' latest effort is not one for loners to find solace.

In the absence of enough fellow flesh and blood competitors, GoD Factory Wingmen allows the host to draft in a number of computer-controlled bots to make up the numbers. The welcome upshot of this is that as well as ensuring that game sessions can take place without delay, these bots can be used as practice for the real thing and provide a welcome avenue for players to sharpen their skills. Comprehensive feature-set aside, GoD Factory Wingmen simply just proves to be a joy to play. The tight handling of the ships, coupled with the frantic nature of the space battles creates a combative playground where superb, emergent stories take place. The sheer thrill of destroying an enemy space craft before tearing through the insides of their carrier and barrel-rolling out the other side proves to be both a potent and inexhaustible thrill that stands among the countless others that the game can offer.

If the game stumbles in any meaningful fashion, it does so as a symptom of the developer's own humble limits. Take the visuals for example, while immensely polished and boasting attractive design, the deep space theatres of war in which the battles take place in feel repetitive and limited. Equally, the carrier destroying mission type that exists, which while stellar is just that; singular, with no opportunity to pursue a different objective for a change of pace.


Given the quality of what Nine Dot Studios has wrought elsewhere however, such complaints seem a little churlish and should reasonably find themselves addressed in future updates.

GoD Factory Wingmen is a game where accessibility comes easy but mastery does not. Yet, the innate thrill in approaching the latter proves to be its own reward over the long-term as Nine Dot Studios sophomore effort proves to be its best, ably injecting new life into the space combat genre with innovative features and a real, loving focus on multiplayer gameplay and tactics.

Screaming through the core of an enemy carrier and destroying its shield generator while partying like it’s Star Wars: Return of the Jedi circa 1983. 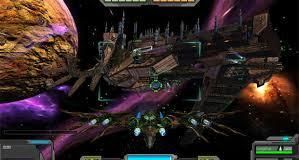