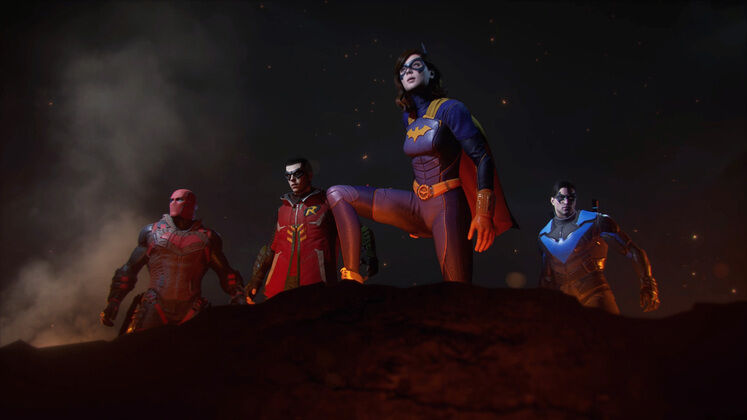 The Gotham Knights have a problem. It’s not enough for them to have lost their beloved mentor and father figure, Bruce Wayne to super-villain Ra’s al Ghul, but Red Hood, Robin, Batgirl, and Nightwing are also stuck in a game that seems to struggle with its own sense of identity, never quite clear about what it’s trying to be, and never able to shift the shadow of what’s come before it.

For example, in the opening scene for Warner Bros Montreal’s latest take on the Arkham-verse, the storytelling is concise and clear: Batman (and James Gordon, for what it’s worth) is dead, and this is a story about coming to terms with loss while living on in your own right. Yet Batman is never far from anyone’s lips, whether it be when you are training in the home-base Belfry, or speaking with the villains of Gotham Knights. Of course, his passing is a big deal, but it makes it particularly difficult for the four protagonists to shine, instead constantly referencing what Bruce has left behind for his protégés. 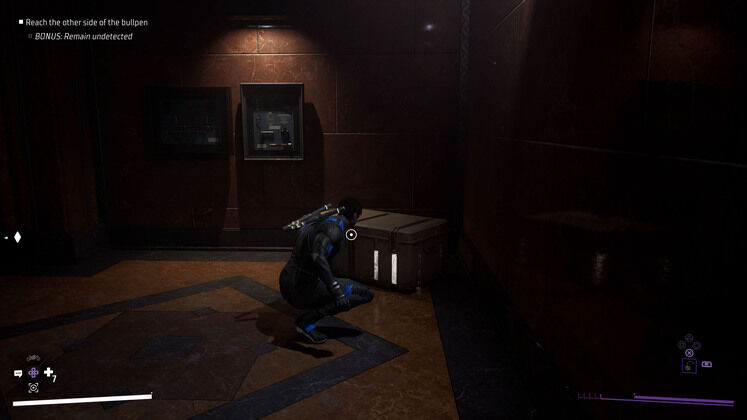 Stealth is an option, but it never quite works that well

Perhaps it’s an unfair criticism to single this out, narrative-wise, but it’s also worth noting that (without spoiling) Gotham Knights also takes one of the more interesting arcs in the form of the Court of Owls story and doesn’t quite stick the landing. Mr Freeze, Harley Quinn, Penguin, and Clayface are all present, and are highlights, as is Alfred, and the cast does their best to keep it together for the story, but it’s all a bit disjointed overall. That said, given that you can play as any of the four heroes at will, it’s nice to see the cut-scenes designed with that in mind: they’re reactive and well done, which aids immersion.

Outside of the story, Gotham Knights is a game that is part Arkham-style brawler, and part-Ubisoft style checklist. The core loop is that you will spend the night prowling the streets as your chosen hero, solving crimes and preventing the bad guys from fully taking Gotham. Throw in some story missions, and then repeat each night. There aren’t a lot of activities, akin to Marvel’s Spider-Man and its crimes, so get used to the lengthy bomb disarming of a citizen, or knocking goons around as they tried to steal cash from a van.

If it sounds like I’m down on things here, that’s because it just feels so heavy and awkward. Gone are the counter abilities Batman had in the Arkham titles, yet the combo-style combat remains. Here you mash one button or hold it for heavy attacks, there’s a dodge roll, and another button will either do a ranged attack or a heavy ranged attack. Certain enemies require a heavy attack to break their block; some require a heavy ranged one. There are “momentum” actions that can also break guards or help with crowd control, but that aside, it’s all a bit rote and samey. 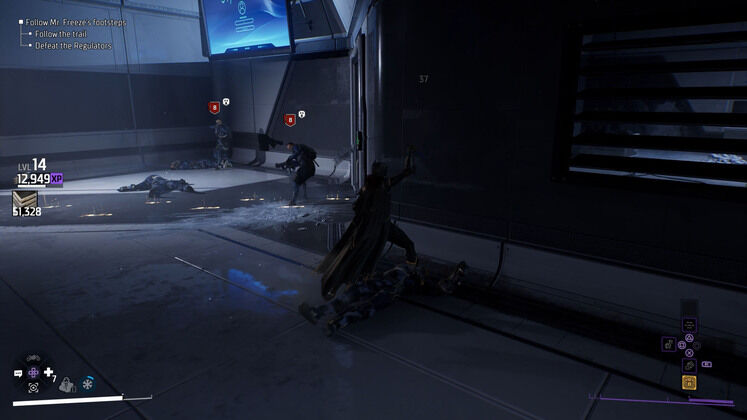 When it clicks, the Gotham Knights combat is a lot of fun

That said, there’s fun to be had when you nail a huge encounter properly. Rolling between a variety of enemies and getting the actions right to ensure you don’t get hit is fun in small doses. The combat and movement are far better during story missions that are more enclosed and, frankly, feels like the paths to the objectives have been better planned out for the movement and combat on offer. It’s only really in the main story sections that stealth ever feels a fully viable option, as out in the world you’ll try and fail to remain in cover due to the enemy’s inconsistent ability to spot you, or not spot you.

On that note, the movement out in Gotham can be a problem. On first look, grappling around is exciting, and unlocking the Knighthood skill tree gives each hero a better traversal option. Batgirl now has a cape she can glide with; Robin can teleport, and so on. It sounds great in theory, but Batgirl controls like a lead weight in the air, making the optional side quests to glide through timed rings an outright chore. It’s impossible not to think about the recently released Insomniac developed Spider-Man title when it comes to moving around the city, or even the older Arkham titles. There are also times when the game will almost make you feel stuck to a cover spot or a railing, and make it awkward to get off and go where you want to. 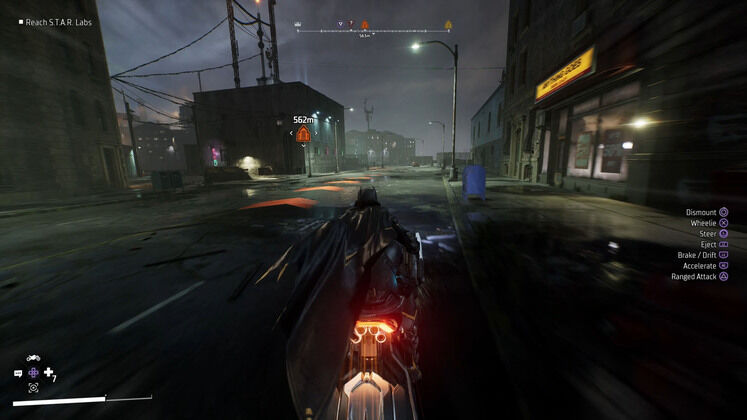 The batcycle is slow and feels like a missed opportunity

To exacerbate the issue, a pretty cool ‘summon anywhere’ batcycle is included. However, there’s a bizarre attempt at a sense of speed here, with ‘speed lines’ rushing at the corners of the screen. It might be successful if not for the fact you struggle to overtake a Gotham taxi at full tilt. Frankly, after a few hours, if you’ve not gone for the Lucius Fox missions to unlock fast travel, I can see many people dropping off. While the game can and does hit a pretty steady 60fps as well, it’s only during cut-scenes and batcycle use that I noticed anything major in terms of frame drops.

What Gotham Knights does well, however, is create four unique characters that offer a real reason to switch between them. Red Hood is a brutal, gunslinging behemoth who will happily use his throw ability to stick a grenade and boot an enemy into a crowd for maximum damage. Batgirl is super-intelligent and can hack cameras from the get-go. Robin is Mr. Stealth and can clone himself to create distractions, and eventually hang foes from high while remaining in stealth, and Nightwing is the all-rounder, perhaps the one I’d suggest starting with. You might have favourites to begin with, but you will definitely quickly realise everyone is viable and interesting in their own right. 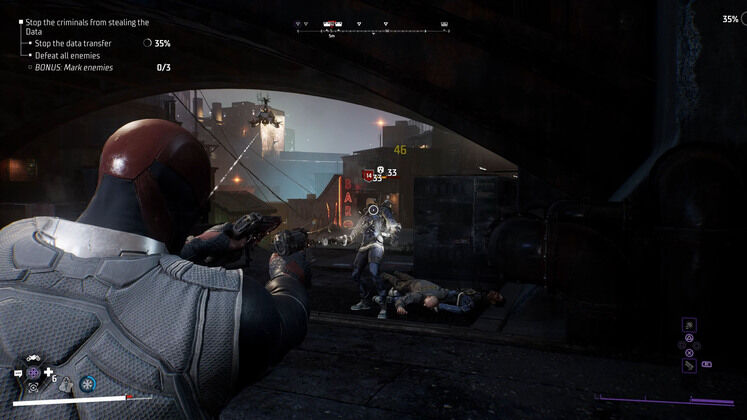 It’s also commendable how well the co-op is incorporated. Jumping into someone else’s game, it’s their map and their icons on the map, but you retain all XP and if you do a mission in their world, it carries over back to yours. XP is shared across all four heroes, too, so if you spend hours as Red Hood and switch to Batgirl, you’ll have her ability points to use in the skill trees as well. It’s only the challenges that will require you to repeat certain training exercises that can slow things down, and despite these, Gotham Knights fails to explain some of its mechanics fully. There’s a huge amount of customisation, from your suit to the batcycle, but if you don’t love that kind of thing, it’s easy to ignore.

But Gotham Knights might just become a guilty pleasure, because when it works; it is a lot of fun. It’s a real shame so many of the ideas make it feel like it has a lack of identity, but when you’re fusing mods together and crafting new armour, you will sometimes wonder why you aren’t in the shadows, stalking your prey instead. Because it’s in those moments, where it all comes together and works, that you realise what could have been. It’s not a “bad game” by any stretch of the imagination, and fundamentally it works and is mechanically sound, but it’s just not particularly exciting or memorable either, which is a real shame.

Warner Bros. attempt at getting things going again with Gotham Knights feels largely flat thanks to unwieldy movement and a world that is more “checklist” than immersive, but in small doses it can be fun, and the heroes all feel unique and work well in co-op multiplayer.

Nailing a massive combo and avoiding damage as tens of enemies all attack you, then seeing them break down in fear and try to escape.

With over a decade in games editorial, Adam has been there and done it, yet keeps coming back for more. An avid sports fan, music lover, and family man, if he's not playing the latest third-person shooter, action title, or platformers, he's probably asleep or at the football. 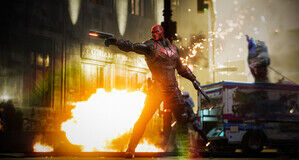