Harry Potter is the kind of franchise that turns people mental. Whether there's a book launch, a film premier, or an unknown extra is opening a local fish market, it's a series that has forced many fans to camp out in anticipation. One has to ask why the games haven't caused such a stir, especially as Hogwarts advances to its final stand.

It seems, no matter how loony they get, Potter fans can't be fooled. Hidden under the breaches of their adult-sized capes, there's a smattering of common sense. The kind of common sense that realises this title will do nothing to remedy the movie-tie-in disease, and that, more fun can be had by sticking a broom between your legs and shouting “whoosh” than playing this title.

It's clear what this game is trying to achieve early on. The actors have grown up alongside the films, and the developers want their work to push out its chest too. This is perfectly fine, and indeed, an expected step alongside the progression of the films. Unfortunately, in trying to get serious, the developers have sapped any creativity and imagination away from Harry, and criminally, the world he lives in. Hogwarts is reduced to a series of lifeless corridors and steps, with nothing but identical piles of debris and columns to hide behind. In fact, this notion extends to the entire game, especially after the emphasis is placed on repetitive action, and dull encounter after dull encounter.

Just like the previous title, players will see Harry from a third-person viewpoint. The inspiration undoubtedly stems from mega-money makers such as Gears of War and Resident Evil 4, but unfortunately, the style of Cliffy B doesn't work for Harry P. Armed with his ever trusty wand and an array of spells, Harry and the gang are more than equipped to deal with the toughest enemies the Dark Lord has to offer. You're forced to utilise each spell in different situations, as they all have various strengths and functions. Whether rapid fire is needed to take down foes at close range, a sniper shot for distance, or even a shield breaker against the protected, all bases are covered. There's also the hilariously rubbish Stupefy, a spell that requires short bursts of fire in order to be effective. Hold down the trigger with this one, and the result will pretty much sum up the teenage frustration Ron feels for Hermione at this point in the story.

These spells are all well and good, but their impact on the enemy is amazingly bad. The only puffs of colour other than 'drab brown' and 'angst grey', the impact of each cast is met with some bizarre reactions from the enemy. Deatheaters may stand still for a few seconds before vanishing, and grunts often stiffly hit the floor like they were putting all their trust in a friend to catch them from behind. It's difficult to tell if you've even damaged Harry's pursuers, as they either dramatically fall to the ground, or act like they're spent too long in the Arctic. Although the different types of Deatheater will have you switching between spells at an astronomical speed, they never really pose a threat, as all of the Hogwarts crew are packing a fair old punch. Whether you're fighting the lumbering behemoths who invade the school of magic, Bellatrix, or even Voldemort, the upper hand is always given to the character that's under your spell (of which, there plenty of faces to play as).

It's said that variety is the spice of life, and with that in mind, Harry Potter's latest adventure is one of gaming's worst-tasting kormas. There's only two different things to do in the entire game: shoot and run. You'll progress to another area of coincidentally placed cover, with another set of opponents arriving just in time for a quick despatching. Often, you're forced to defend Ron or Hermione while they try to open a door, as EA strike another massive tick through the boxes of the 'Generic Gaming' list. If you're not defending doors, you're running towards the camera in a bid to escape various dangers. Plenty of developers place these sections in to break up the monotony of a boring formula, but utilising it more than once underlines how EA's creative juices haven't even begun to flow with this one.

It really is a shame, but the discrepancies don't stop there. The narrative is presented with an extreme lack of care, as key scenes and deaths are washed over. Even more regrettably, memorable moments such as the flooding of the Chamber of Secrets and Harry's furore into the Forbidden Forest are amongst the worst sections of the game. The battle with Voldemort doesn't feel like it has been years in the making, instead, it feels like the corporate bigwigs have ordered their team to poorly reproduce events of the film.

To cap it all off, Harry's friends are amongst the dumbest this generation. If they're not getting stuck on scenery, they're standing in the middle of the battlefield and staring at the scarred hero. You can visually see the moment that you've followed supporting characters far enough for the next conversation to start too, breaking any sense of immersion before it even got started. Throw in the fact that none of the characters are voiced by the real actors, and Kinect support has been dismissed, you start to unveil a title that's more farcical than it is magical. For a franchise that has united both adults and children alike, whoever pitched the direction of this game has produced a Sirius misfire.

Probably too difficult for children, and not engaging enough for adults, it’s difficult to see who EA are trying to cater for (especially when footage of the PS1 game is shown after the credits, reminding players how fun the titles can be). For fans of the series, I suggest you re-read the books or watch the films again, and don’t bother with this. For fans of gaming, stay well clear. Even as far as movie-tie-ins go, this title is the biggest crime to the Harry Potter franchise since Emma Watson decided looking like a public schoolboy is sexy.

You know what, I don’t think there was one… 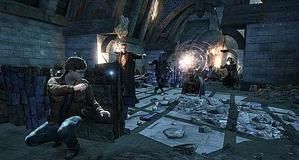