Little Racers STREET is a budget isometric arcade racer that features smooth shiny graphics, online multiplayer, a large selection of fictional cars based on real world models, and a single-player career mode. It comes from developer Milkstone Studios who're primarily known for Xbox Live indie releases. The game is clearly designed to be easy to play and difficult to master, although it's up for debate how well that's achieved. There's definitely the workings of an interesting title here, particularly at such a low release price. Nevertheless, it's hard to not notice the baffling lack of some gaming features which may have shunted this release up to the next level.

The game plays from a fixed point camera in the sky above the cars and with the simplicity of the controls the game can be well played intuitively from the get-go. Apart from the basics you'd expect in a racing game you also have the ability to activate a nitro speed boost, this gives you a sharp but short acceleration increase which freely recharges over time. There's also a handbrake which can be used to skid the back wheels around tight corners. It's very easy to get to grips with, and after one race you'll already be able to give the initial computer opponents a good run for their money.


The career mode allows you to use your race winnings to purchase and upgrade cars over time. Money and cars are also awarded for a large range of in game goals, such as completing 20 class E races, coming first a certain number of times, and so on. Purchased cars are placed in your garage where they can be customised, upgraded, and sold. It's a little like taking the economics of a modern game such as Forza and then implementing them into an arcade style game from 20 years ago; shiny graphics aside. Each car is given a class rating based on its potential performance and before each round of racing you have to select a race of the appropriate class to participate in. Just as in the blockbuster racing games which feature these types of things, upgrading your car may also bump it up to the next class.

There's a great deal of well-designed tracks in the game with tight corners, bumpy roads, ramps, short jumps, and roads crossing over. The 3D environments are pretty and the backdrops are as good as to be expected. There's also a variety of weather conditions and even night races. In addition to providing a much welcomed diversity to the gaming aesthetic, these, of course, affect the handling of the cars as one would expect.

At first, it's a mildly enjoyable and almost soothing experience. The graphics look slick and colourful, and the vehicles are wonderful to drive. In fact, the actual racing dynamics have been very skilfully put together. The cars skid and collide in just the way you'd intuitively expect, making the driving experience intrinsically satisfying much in the way that the old arcade racers of the past were. To some degree, the game is even a little reminiscent of Rock n' Roll racing from the SNES.


The computer opponents provide additional levels of challenge as you jump up through the racing classifications by buying faster cars and struggle to adapt to the new pace on the grid. However, there's a noticeable element of grinding which begins to permeate the experience. After a few hours you begin to wander, 'Wasn't there something else which made those other games fun?' And you'd be right.

Unlike Rock n' Roll racing, Little Racers STREET does not feature weapons, oil slicks, spikes etc. There's no power-ups in the style of Mario Kart, and in-fact other than the nitro there's not really anything other than turning and breaking. That's not so bad for a quick therapeutic race here and there, but it creates a big problem for the single-player campaign. With such a simplistic racing model, it's just not that interesting having to churn away for several hours against AI opponents in order to purchase the next class of car.

Of course another thing which made those old top-down classics fun was the multiplayer right? I can only say that by all estimations this game would make an excellent multiplayer experience; however, I'd be guessing. Bizarrely, Little Racers Street doesn't feature split-screen multiplayer; it's only possible online. I'd love to tell you what that's like, but despite numerous attempts I wasn't able to find any other players and can probably safely conclude that at this stage there aren't any. Perhaps after release that'll change, but it still begs the question, 'y u no put split-screen??'


Gripes aside, the game features a ton of excellent racing tracks, a time-trial mode which compares your track times with others online, and a quick-race feature that lets you jump into a quick single-player race using any car in the game you like. On top of that, the music is absolutely fantastic and all the in-game interfaces and menus are well put together. Indeed, in many ways this is a wonderfully put together budget release.

I suspect there’s going to be good number of folks out there who’ll dig this game. It’s cheap, it controls fantastically, the graphics are slicker than an oily fox, and it’s a genre which has been gagging for a good makeover. Plus, if you actually get a group of people to buy the game then you’ll most probably have a great multiplayer experience. But personally I wasn’t quite convinced, particularly by the lack of depth. If it’s a choice between this and a 25-year-old Super Nintendo game then sign me up for the retro experience.

That classic racing moment of tearing through the pack on the last lap and using nitro to just about take pole position on the finishing line. 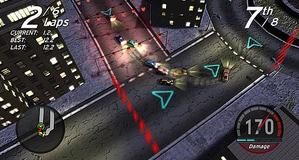