Is this FPS/RTS hybrid the best of both worlds?

Blending real time strategy with first or third person action is a concept that’s been floating around for many years. While admittedly not commonplace, the likes of Toy Soldiers and the 1998 remake of Battlezone have proven that RTS and action hybrids can be critically and commercially successful.

By and large these games have been single player focused. But what if there was one where every unit was controlled by real players while another player handles the real time strategy elements? That’s the question that developer InterWave Studio asks with Nuclear Dawn.


A typical match starts out with a Commander for each of the two sides being randomly chosen while the remaining players become ground troops. The Commander controls all the RTS elements like base building and upgrades from a bird’s eye view. The ground troops play in a typical class-based FPS manner though they are responsible for capturing currency generating resource points.

Aside from the field players earning funds for the team there isn’t much crossover between the two types of game play. In fact you’re usually locked into one of either roles through the entirety of each match. This is a little disappointing and means that even though your whole team is working toward a common goal the two types of game play end up feeling too disparate.

Both roles are pretty straightforward. Ground troops can choose from four classes a la Battlefield - assault, exo (heavy weapons), stealth and support. Different loadouts for each class will become available if the team’s Commander pours enough resources into upgrades though there’s not much customisation variety.

Once you’ve got your head around the game’s tech tree there’s also not much to playing as the Commander. Basically you’re put in charge of structure building and upgrade management. If you’ve ever played any real time strategy you’ll know what to expect, just with the unit creation, unit control and resource gathering taken out of your hands.


Though both types of game play aren’t innovative or particularly complex in anyway that’s not to say there isn’t any strategy to be had. The game clearly intends for the Commanders and the troops to be working in tandem, ideally with the latter following the formers’ orders.

But in my experience this rarely happens in any meaningful way. It’s common for field troops to ask their Commander for particular upgrades or structures to be made (politely or otherwise) but I’ve yet to see the majority of a team working one overarching strategy. I’m sure this can happen, particularly if can manage to get enough reliable friends to play with you, but it seems like a rare occurrence.

The game’s presentation is also very middle of the road. The project began life as a Source engine mod back in 2006 and while the promotional materials claim it to be based on the Left 4 Dead 2 engine it definitely looks closer to a Source game circa 2006.

I find it odd that such an indie project decided to go for a realistic, resource intensive look rather than a stylised, scalable and less demanding direction. With the first person shooter space being so crowded and competitive I would have thought InterWave would have wanted to maximise the amount of people who could play the game in the same manner that Team Fortress 2 did.

Those who pick up the game but are new to online shooters and/or real time strategy games aren’t eased in gently, either. Nuclear Dawn’s tutorial consists of four different videos watchable at the menu screen. There are no training missions and no computer controlled bots to practice against (and really no offline support to speak of). Again, more could have been done to make the experience more user-friendly.


While it won’t be able to compete with its big budget peers in pretty much any aspect, at least it’s a fraction of the price of the likes of Call of Duty: Modern Warfare 3. On Steam it’s currently selling for under half of the price of a new retail game (£16.99 here in the UK).

However, even at that price Nuclear Dawn is a hard sell. It’s not a bad game even if the genre blending game play doesn’t deliver on its promises. But with a jam-packed holiday season ahead brimming with the likes of Battlefield 3 it’s hard to recommend.

Finally getting the call to be your team’s Commander. Even if it isn’t the most fun thing in the world power hungry gamers will get a kick out of ordering their team mates about.

However, even at that price Nuclear Dawn is a hard sell. It’s not a bad game even if the genre blending game play doesn’t deliver on its promises. But with a jam-packed holiday season ahead brimming with the likes of Battlefield 3 it’s hard to recommend.

Finally getting the call to be your team’s Commander. Even if it isn’t the most fun thing in the world power hungry gamers will get a kick out of ordering their team mates about. 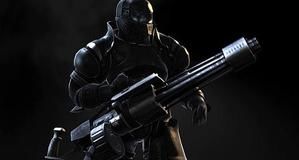