Travel to a dale full of icy winds

Obsidian has taken a nostalgic trip back to the tundra for Pillars of Eternity’s first major piece of DLC, and the frozen setting isn’t the only thing in The White March Part One that brings to mind the combat-focused games of the Icewind Dale series. The focus here is firmly on battle, exploration and looting; that means that a little of the character and mystery of the main game is lost, but there’s still plenty of fun to be had.

Pillars of Eternity: The White March Part One

Travel to a dale full of icy winds.

The White March takes place about a third of the way through Pillars’ main story, though it can be pursued at any time afterwards, and even scales dynamically if you’re of a higher level. After a message lands on the doorstep of your personal fortress at Caed Nua, you head off to the frozen village of Stalwart. This rundown former mining town, which will immediately bring back memories of Easthaven for any Icewind Dale fans, has fallen on hard times. Hard times that have gotten markedly worse recently, as a tribe of ogres wielding cannons has taken it upon themselves to attack the town and murder everyone in it.

Fortunately for the puny villagers you arrive just in time to fend off that attack, and quickly get roped into a scheme to enter the forbidden dungeon of Durgan’s Battery and find the White Forge, a legendary dwarven creation that could provide Stalwart with the means to reclaim its former glory. The forge in question can craft ‘Durgan steel’, which is better than all the other steel, apparently. 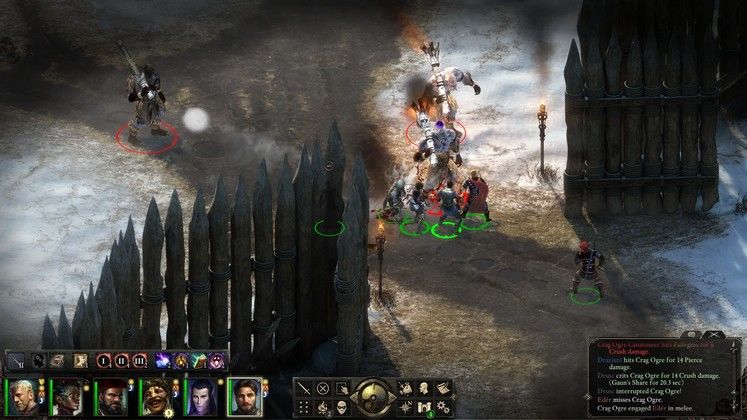 Ogres with cannons? That's got to be cheating

Cards on the table here, the main plot in The White March never really comes together. It all feels a bit superfluous – why would The Watcher, cursed seer of souls, bother wandering all the way into the frozen wastes on the off chance they might get a better sword? There are a few attempts to tie Pillars’ main plot to the expansion, but they’re largely inconsequential, and the very nature of your main objective can’t help but make your trip north feel a bit like an extended side mission. That’s not to say there aren’t any engaging quests, because there definitely are, but taken as a new chapter of your hero’s story, The White March feels a bit lightweight.

Thankfully, the new locations are fun to explore and packed with treats, and combat encounters are varied and challenging. There are some really tough fights here, including an optional scrap against a dragon that will absolutely destroy your party if you come unprepared. Again, if you put up with Pillars’ combat system in order to enjoy the storytelling, this expansion might not be for you – there’s a lot of fighting, and little opportunity to talk your way out of trouble. Cragholdt Bluffs, the second segment of the expansion that takes place back in the Dyrwood, is a high-level zone which is practically all hack-and-slash murder. Pacifists need not apply.

On the positive side, there are plenty of new enemies to keep combat fresh, some excellent loot, and two new levels if you’re playing a high-level character. That means new spells and abilities, some of which are really fun, like the barbarian’s ability to leap into battle and slam down among the enemy. You can also track down ‘Soulbound’ weapons – legendary artefacts that become increasingly powerful as you fulfil certain requirements. 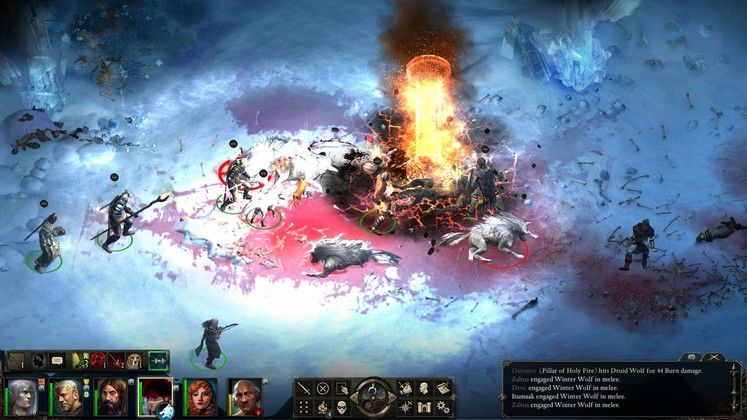 Combat is still deep, tactical and fun, which is good because you'll be doing a tonne of it

Of course this wouldn’t be an Obsidian game without a couple of interesting new characters to recruit. The first you’ll meet is Zahua, a fighting monk from an ascetic order that teaches a doctrine of social alienation and ritual scarification. As well as possessing probably the finest NPC introduction scene Obsidian has ever come up with, Zahua’s an amusing presence, whose off-key view of the world provides some nice moments of levity. He’s the sort of guy who’ll be happily munching hallucinogenic mushrooms as you trudge through the frozen wilderness.

The Devil of Caroc is the second potential recruit, a cynical, wryly sardonic soulbound construct who’s not even attempting to hide her bloody past. To be fair she has some fairly understandable reasons for her cold-blooded lack of remorse, and as always, prying away at her backstory until you approach something resembling the truth is a satisfying distraction from all the hacking and slashing. For the most part Pillars’ travelling companions are a fairly easy-going lot (with the exception of Durance, perhaps) so it’s nice to see Obsidian throw a morally dubious, if not outright evil character into the mix. 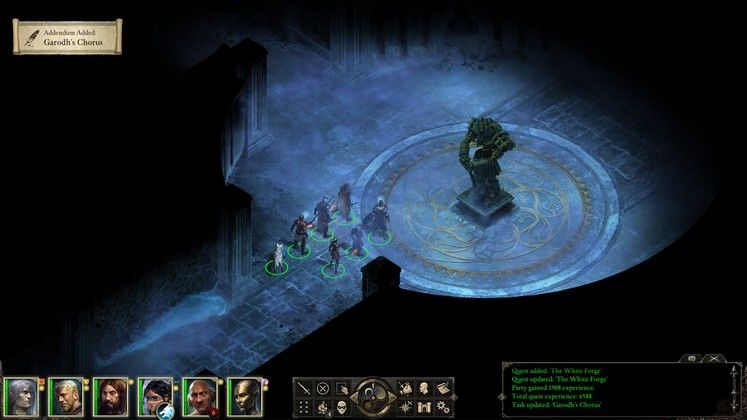 Pillars' painterly backgrounds are still gorgeous, and it's still a treat to explore new areas

Pillars of Eternity shies away from the inter-party strife that the Baldur’s Gate games gleefully partook of, but there are a few nice, snappy lines of dialogue between the new recruits and your merry band. The character work in The White March Part One is very strong, as you’d expect from Obsidian, deft and creative in all the ways that the main quest isn’t. On a purely mechanical level, it’s also nice to have the option of adding an NPC monk and rogue to your party, as both previously went unrepresented - both new characters can thankfully be taken back into the core game.

The White March Part One is far more reminiscent of the hack-and-slash adventuring of the Icewind Dale series than the more thoughtful, philosophical nature of Pillars of Eternity, and as a result the story never feels quite as engaging. Hunting down magical weapons is a decent enough concept for a side-mission, but as a full-length expansion it feels a little lightweight, with none of the world-affecting impact of the main game’s story. There are moments where the world-building shines – I’m still fascinated by the complex cosmology and theology of the world that’s been created here, and I’m itching to see more – but I never felt that I had much of a personal stake in what was going on.

Fortunately, a couple of interesting new faces to add to your party, some great loot, and a few truly brutal combat challenges are enough to make The White March Part One worth your while. It’s not essential, and not close to the best that Obsidian is capable of, but it’s another perfectly enjoyable few hours of looting and adventuring.

I nailed that new dragon fight after countless attempts, and it was a sweet, sweet moment to savour. 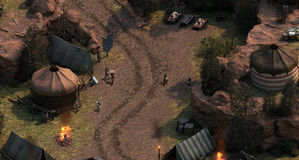