So do we have to plug in a second cartridge? Chris Capel finds out

It’s only been a few months since Sonic Generations proved that SEGA were still capable of producing a decent Sonic game, something the world once thought impossible. Previous to that Sonic 4: Episode I certainly wasn’t bad but had a few issues – now that Episode II’s finally here, will Sonic Team sort them out and continue their winning streak?

First impressions are certainly good, at least I got the impression that lessons are being learned after a decade of repeating mistakes. There are no 3D levels, there’s no dialogue at all, the story’s kept very basic, there are no overly long unskippable cutscenes, the physics have been sorted out, Tails is the only extra character (and he also keeps quiet, phew), and the whole thing is a homage to the best two Sonic games – Sonic 2 and Sonic CD. So what could possibly go wrong? Sigh.


I don’t know what it is with Sonic Team, but they always manage to screw things up. I love Sonic The Hedgehog, and I love the original ideas that come out of the developer now and again (NiGHTS, Burning Rangers, Billy Hatcher & The Giant Egg), but every game they develop feels like no-one’s played it before release. There’s always something that should’ve been highlighted in playtesting, like a camera that frequently gets stuck, silly or unresponsive controls, cheap deaths, boring cutscenes, bugs, or areas that are frustrating and not fun at all.

Episode II hits the last one there like a brick. There are several areas in the game where you just have to wonder if anyone from Sonic Team or SEGA actually picked up a pad and played them at all. I’m referring in particular to the bosses. Now, I know bosses are meant to be a challenge, but I’d like to at least know when I’m going to get hit and why. Taking the first boss (a tentacle robot) as an example, it seems utterly arbitrary when its tentacles can hit you or not. More aggravatingly it can take up to a minute to just start a boss fight even after dying, with enforced ring collecting and unskippable animations padding out each one – I don’t know why this happens since literally no other Sonic game does this! The “final” boss (sans all Chaos Emeralds) is also an exercise in frustration, pulling an unavoidable insta-kill move out of its arse just when I was about to beat it.

Now that’s out of my system let me focus on the good. I’ve mentioned a few of them above, but I’m especially glad that everything’s been kept simple – and that Sonic’s been kept silent. Not even Tails or Robotnik say a single line, and for that fact alone I considered giving Episode II a 10/10. I didn’t though, since I had to play the whole game to find out. Further on the Pros, bosses aside there are a lot less cheap deaths this time around. Levels flow quite smoothly, and if there’s an annoying section it’s usually something actually difficult rather than past games’ “spikes or enemies just where the spring bounced you, P.S. we hate you signed Sonic Team”. Finally if you’ve got both Episodes you can unlock ‘Episode Metal’, a four-act extra episode where you play as Metal Sonic in some of the hardest maps. A neat thank you to players, for sure.


Sadly that’s pretty much the end of the praise. Yes, the physics and controls have been sorted out – hallelujah – but I’m not going to count them as Pros since they really should be standard in every game ever made. Sonic now actually jumps when you press the Jump button and doesn’t stop dead the instant you let the joystick go or impossibly hangs on to ceilings. Hooray. “Not screwing them up entirely” is not something to be commended, rather a stern “thanks, now don’t do it again”. Sticking with controls, I do quite like the new move where you can call Tails in by pressing X for either a lift (negating many falling deaths) or a rolling attack, but the game often gets them confused and I’m still not sure how it distinguishes the two. On ground or not? Pressing horizontal or vertical on the left stick? No idea. But that’s not the worst of it.

Sonic Team appear to have noticed how everyone loves Sonic 2 the most. I wish they’d noticed this before Generations with its one single stage from that game, but I guess I should be content with every level from Episode II being exactly like a level from Sonic 2. Actually no, I feel the opposite to content – enraged, that’s it. There was a place to remake old Sonic levels and it happened a few months ago. If you’re going to call a game Sonic 4 you damn well better have something new to bring to the table, but Episode II doesn’t. Oil Ocean, Aquatic Ruin, Sky Chase & Wing Fortress, they’re all here (alongside Sonic 3’s Snow Cap) in ripped off and renamed form.

All feature the same tricks and badniks they had 20 years ago with no innovation at all. Well, White Park Act 2 is based on a cool shifting rollercoaster, and the Death Egg has ever-changing gravity, but these new bits are brief. Apart from a slight graphical buff you could well be playing Sonic 2, and while I love that game just getting Acts 3 & 4 of Oil Ocean is not what I wanted from Sonic 4. Even the Special Stage is identical to 2’s. It all feels utterly uninspired, like Sonic Team are completely out of ideas. I don’t mind them taking inspiration from the best Sonic game, but for hog’s sake don’t just copy it entirely.


I hate to kick the game any further (no I don’t, that’s my job), but there are two areas that Sonic games have always got right that Sonic 4 Episode II gets excruciatingly wrong. The first I mentioned earlier, always being straight to the point with the bosses (whereas in Ep 2 you can wait for up to a minute to start them), and the second is music. From Sonic 1 to Sonic Colours every game has had catchy, hummable tunes in the background. Yes, even Episode I. This one on the other hand has teeth-pullingly tuneless offerings on every stage. They sound like a synthesizer being repeatedly hit with an echidna. I’ve no idea what happened to composer Jun Senoue (who’s done most of the Sonic games) between Ep 1 and 2, but I hope he gets his talent (and hearing) back soon.

It’s sad really since Episode II is a really solid Sonic game, just one with frustrating boss fights, painfully bad music, and a total lack of originality, imagination or inspiration. I don’t want Sonic to die, but he needs a developer that doesn’t find some new and amazing way to screw up every game they make. I personally just hope we don’t have to wait another 5-7 years for a decent Sonic game to come along (depending on where you stand regarding Secret Rings and Sonic Rush). Sonic 4 Episode II though most definitely is not that game. Sonic Team, SEGA… we’re waaaaaaitttinnnggg.

It’s sad really since Episode II is a really solid Sonic game, just one with frustrating boss fights, painfully bad music, and a total lack of originality, imagination or inspiration. I don’t want Sonic to die, but he needs a developer that doesn’t find some new and amazing way to screw up every game they make. I personally just hope we don’t have to wait another 5-7 years for a decent Sonic game to come along (depending on where you stand regarding Secret Rings and Sonic Rush). Sonic 4 Episode II though most definitely is not that game. Sonic Team, SEGA… we’re waaaaaaitttinnnggg.

The race against Metal Sonic. See, even the best bit is ripped off from another Sonic game. They even use the same music! 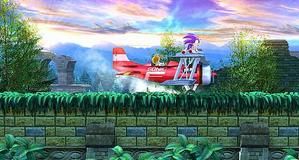