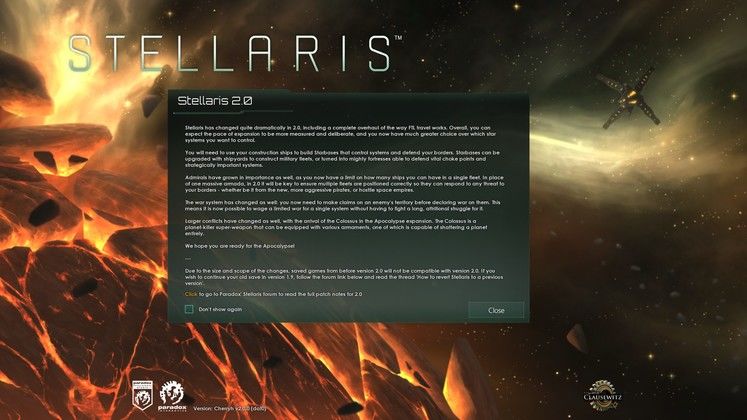 The Stellaris: Apocalypse Expansion was pretty mediocre, adding a handful of situational superweapons alongside one ship class, a few perks, and one mid-game crisis. However, it’s simultaneous release with the free and awesome 2.0 patch coloured a lot of less discerning impressions.

We don’t often review patches, but the Cherryh update for Stellaris effectively changes half of what the game is, providing a completely different experience from what it was at launch. As such, we thought it would be a nice idea to update our review of the game. We present you our Stellaris 2.0 Review. 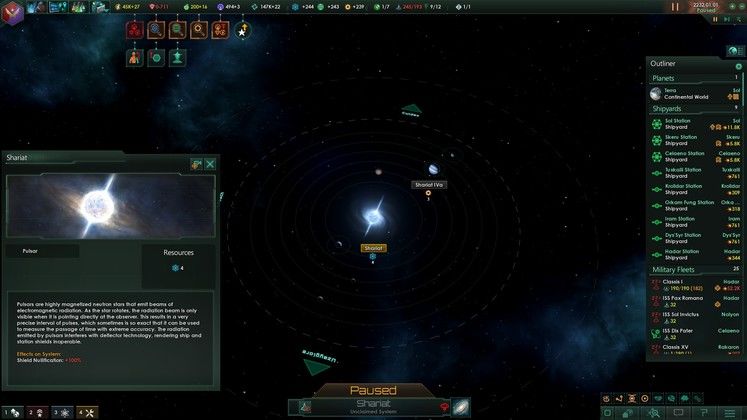 Aside from home systems thankfully starting surveyed and only having a small amount of randomisation, the biggest change comes in the way of spaceports. No longer constructions on top of a planet, starbases are now huge outposts established in the orbit of a system’s star.

With a five-step upgrade path and capable of tanking entire fleets with a range of pretty much the whole system, these revamped spaceports pull double duty as the defensive platforms and frontier outposts they replace. Place a lowly level 1 Outpost on a system to claim it as your own, and start upgrading it all the way to a Citadel to turn it into a shipyard or bastion of defense. 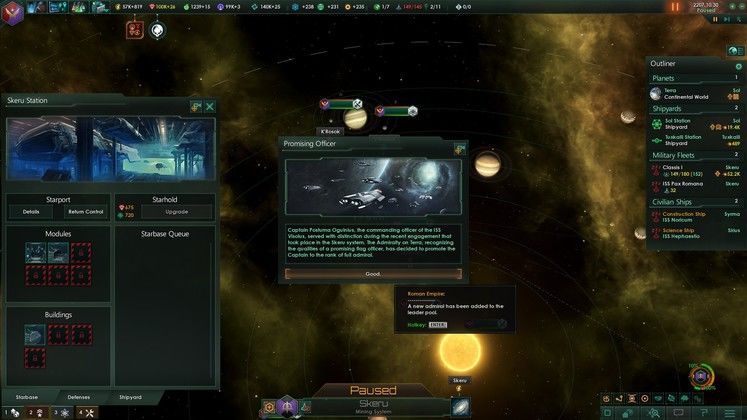 These changes mean you must now consciously decide where your fleet building capabilities will be located, and allow you to lock up whole portions of your empire when synergised with the now hyperlane-only game mode. This is one of the best changes in the 2.0 patch, as starbases’ repair rates really allow it to hold off an invasion fleet alone.

Speaking of expansion, borders no longer grow based on how big population is, but is always fixed around a star system. In order to grow your borders, you must build an outpost on a new system for a very high amount of influence, after which you can colonise planets (or not). While this is a good change that reduces border creep, it does add a lot of strain on influence and surveying, as you can no longer send ships to systems that have not been surveyed by a science ship. 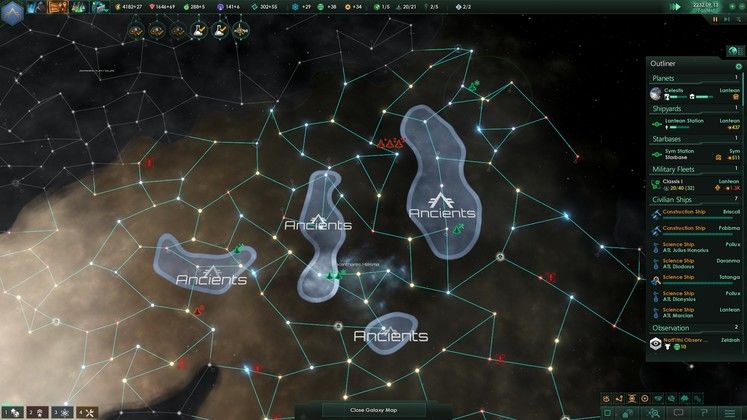 A lot of people were very worried about the change to FTL, as it was one of the cornerstones of Stellaris. Previously able to freely choose between warp, hyperlane, or wormhole travel when creating your species, 2.0 removed those options and made hyperlanes the only option, with wormholes now static galactic features (or man-made ones through the use of gateways).

Luckily, this is the one freedom-removing change that actually made the game better. Hyperlanes, for better or for worse, create a certain flow, naturally generating nexus and chokepoints. The implementation leaves a bit to be desired, as the pre-game “Hyperlane Density” slider either creates a bunch of linearly connected systems or huge sprawling networks with few chokepoints. 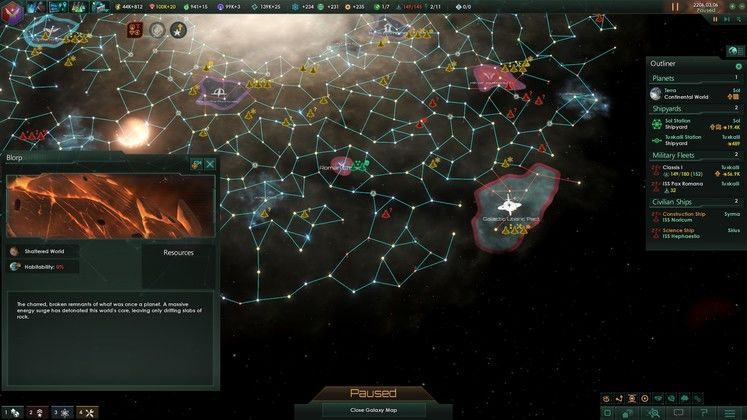 While the point of only having one FTL option is debatable, the truth is this only works so well because of the new starbases. What few chokepoints you do get become veritable walls against invasion, and together with the new sublight travel that requires you to actually leave the system in the general direction of your destination, forces enemies to actually move through the gravity well and engage the starbase.

Unfortunately, the game has not been balanced properly for the new inclusion, and nothing suffers as much as timed events. The new FTL changes mean ships easily take months or even years to reach their destinations, means some timed events like the Gas Giant Dwellers’ relocation just can’t be completed in the allotted time frame. While I previously never let timed events expire, the vast majority of my timed anomalies failed in 2.0 – only battle debris and their thousand days-timers were long enough to redirect a ship to them in time. 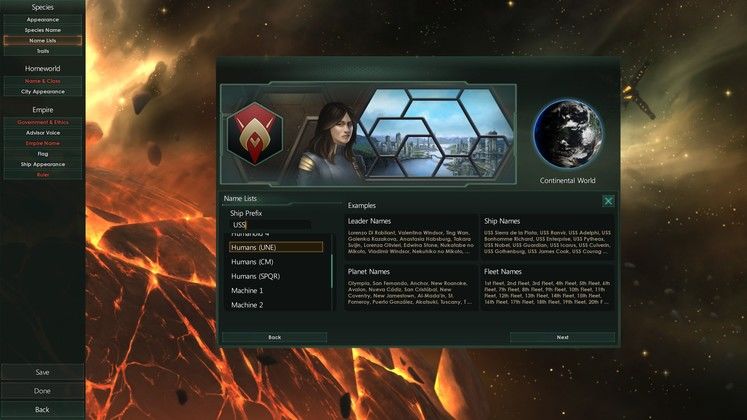 All empires now start with all kinetic, missile, and laser weapons, allowing a greater freedom right off the bat when designing ships (and making a whole lot more sense for an interstellar-faring race). Paradox also made all the non-Megastructure/AI related Ascension Perks part of the base game, adding an immensely important part of the gameplay loop to the vanilla version and possibilitating further expansion.

Edicts have also been changed, with all but Martial Law and the new Consecrated Worlds and Land Clearance now empire-wide instead of planet specific. A new energy credit-based (and horribly named) “campaigns” have also been added as a smaller, alternative edict that doesn’t require influence. While edicts now last 10 years, the high influence cost in every new facet of Cherryh does make their use somewhat complicated. 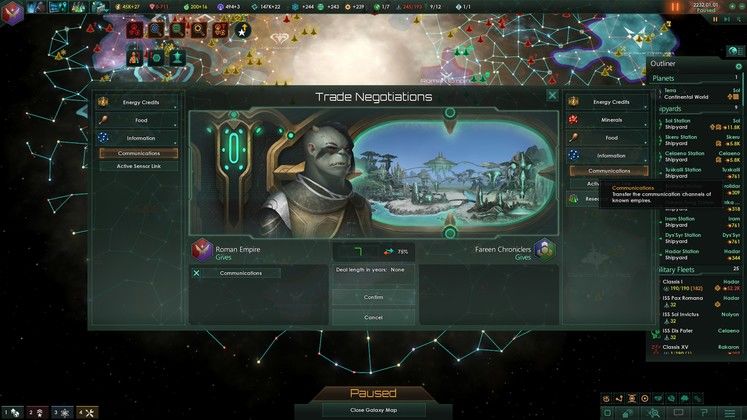 Diplomacy has been changed slightly, with a new option to exchange communication instead of the star charts of old. Establishing comms with a race gives you info on all their controlled systems alongside access to their whole rolodex, allowing you to reach anyone they have comms with.

Tech progression, on the other hand, appears much better now, quickly giving you access to better power reactors and allowing you more flexibility when designing ships. Automated Exploration also seems to appears way earlier in-game, finally giving it a proper use and reducing micromanaging in the early game. 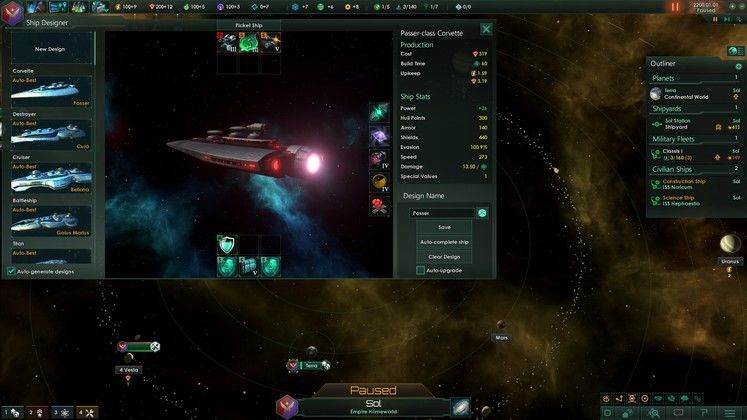 War has thankfully been changed, with the obtuse war goal system scrapped in favour of a still less than ideal “claims” mechanic. You now spend influence (again) to put down a number of “claims” on a given system, which will be given to you at the conclusion of a war. It is still not a good system, and Paradox seems to have a lot of problem actually making warfare interesting in their titles.

Another new addition called war exhaustion is in dire need of balance, raising way too quickly and dealing way too many penalties when a conflict has been ongoing for more than a few months. Aside from getting in the way of proper warfare, it also auto-forces peace on the player once certain thresholds are reached, which is never good game design – the player shouldn’t have the game upon these sorts of decisions without recourse, and especially not on such an important matter as war. 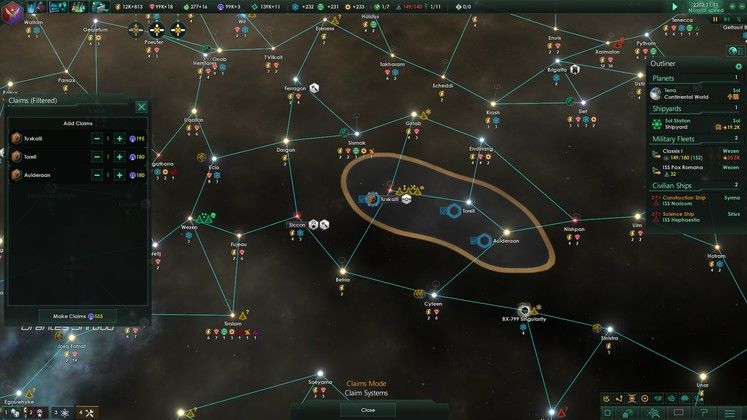 Wars now also require a very Europa Universalis-y “casus belli” to even be declared, which does bind your hand a lot and more than once stopped me from going to a war I wanted for the reasons I wanted to. On that subject, the preposterous God-imposed limitation on not waging the same war again before 10 years is still here – it would be great if we could declare war at any time but took a massive hit to diplomatic penalty doing so, but alas, this shameful limitation has gone unanswered once again.

Speaking of annoying, pirates have been changed from a small early-game inconvenience to an eternal pain in the ass. No longer spawning just once, they now spawn intermittently throughout a whole campaign with nary a warning, always next to your systems and always immediately beelining to your territory. They add little difficulty to the game thanks to the new starbases, instead acting as an eternal nuisance that forces you to divert a fleet away from where it’s needed for months at a time. It’s frustrating. 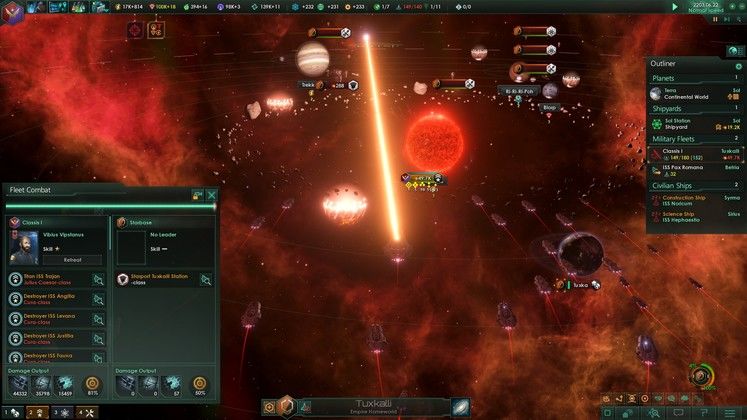 The good news is, doomstacks have mostly been taken care of. The new fleet command restriction prevents fleets from being impossibly strong with thousands of ships, forcing you to break them into smaller attack forces. The hyperlane travel changes also mean you often can’t keep your fleets together in one spot as your empire expands, further reducing the temptation to create artificial doomstacks. Unfortunately, the AI still breaks those rules (especially during crisis), which breaks illusion a bit and makes Stellaris feel unfair.

Combat per se has also changed, with a bonus to small fleets facing big ones and a disengagement routine that stops ships from being destroyed when they are disabled. While the idea is good and works well enough, the execution leaves a lot to be desired – disabled ships are removed from the screen until the battle ends but remain on the combat list, giving an inaccurate readout of a situation. More than once I checked on a battle that was taking way too long to find a single battleship in the system slowly circling a corvette, and upon the enemy’s destruction, the rest of the fleet just popped into existence out of thin air. It’s shoddy. 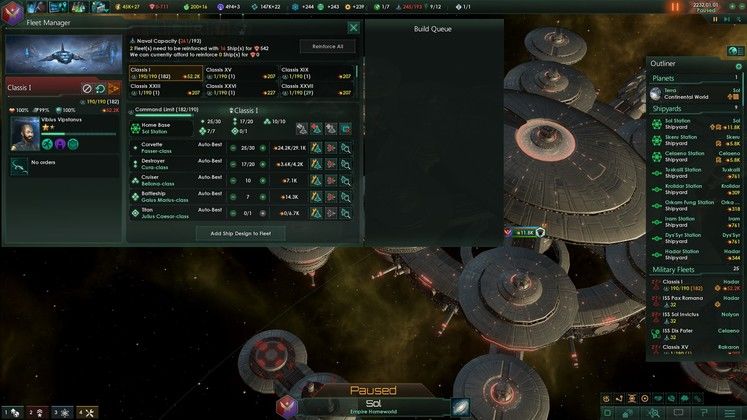 Ground combat has also been slightly tweaked, dealing loses to retreating armies and at times giving value to quality over quantity. The best addition was the aggressive stance to transport fleets, allowing them to follow your fleet and automatically assault planets that are a guaranteed victory. They will still wait for you to bombard fortified planets, but the AI will act like a proper general and conquer undefended ones without you micromanaging.

The last and biggest change comes in the form of the Ship Designer and the new Fleet Manager. Fleets can now be designed, reinforced, and retrofitted from a single menu, which in theory makes everything streamlined and easy to access. In practice, the Fleet Manager is quite broken, losing track of my ships several times and creating multiple copies when reinforcing, causing me to waste materials and go above the limit in multiple instances.

The ship designer has some new features, like a single reactor slot,, and the fact missiles and torpedoes have been rolled into a single category that serves to bypass shields and soften up the target. In a break from most changes so far, more combat computer variants have been added, allowing the player to tailor specific ships for specific roles instead of having each ship behave solely as the game wanted. All in all, its a general improvement that streamlines what could be an overwhelming aspect of gameplay. 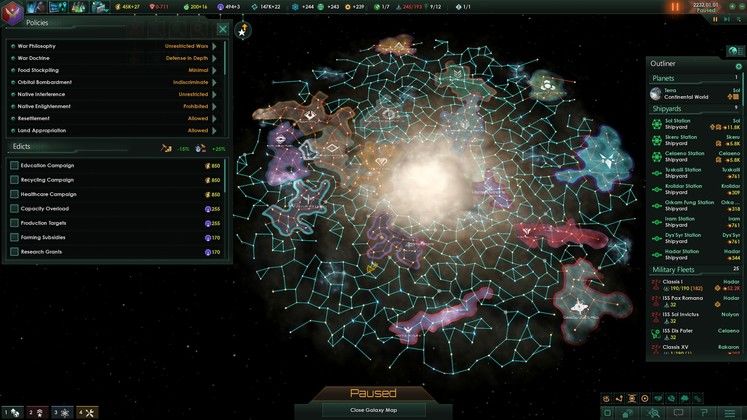 In the end, Stellaris 2.0 is a massive success. Most of the gameplay’s features have either been refined or straight up improved, and the end result is a vastly more enjoyable game. So enjoyable, in fact, that the patch vastly outweighs the paid expansion when properly compared against each other.

There are several minor quality of life improvements, like proper icons for each ship/fleet type, new name lists, and Upgrade warnings in the outliner. I would still like some relatively simple new options, like being able to individually mix and match the ship names, leader names, and planet names of several name packs instead of choosing a single boring predefined package, but that will hopefully come in the future.

While war exhaustion, pirate spawning frequency, influence costs, and events timers are desperately in need of balancing, those can be easily fixed with a hotfix or a follow-up minor patch. If Paradox focus a bit more on player freedom and this patch is any indication of the future, Stellaris best times are definitely ahead of it.

A major improvement in almost every facet of gameplay, made even better because it’s free.

Seeing my lonely level 2 starbase tank and destroy a pirate fleet without assistance.