Kicking up a storm: we review newcomer Storm: Frontline Nations

As is the curse of people who do what we do for a living, you eventually play so many videogames that they eventually just all start looking the same. When coming across new IP's or franchises for the first time (especially from new studios), it's important as a writer that you don't get bogged down too much in comparisons and similarities.

Take Storm: Frontline Nation for example - looking at it, you can draw parallels from any number of other titles - Total War's dual campaign/tactical mode. Supreme Ruler's political setting, Civilization's tile-based combat, EndWar's relatively simple rock-paper-scissors-artillery dynamic... there's many decent strategy games hidden in this title's make up. It's the debut game from Swedish studio Colossai Studios, and whilst the inexperience shows, there are some hidden gems here.

Storm throws you into the middle of a near-future Europe that's teetering on the edge of war. In terms of a grand campaign, there are 2 options available to the player - first and foremost is the 'Story' campaign. You have a choice to play as the UK, Russia, Germany, France and the US, and each country as its own specific goals and story-arc to play through. There's also an open campaign, where a long with these initial five you can choose to play as any of the 40 other nations present in the game, and create your own path to domination. The focus on Europe is both a good and a bad thing, and we can't help but feel the studio played it safe here.

The story-driven campaign is definitely a strength - giving you guidance and a direction to focus your energies. The way the game handles the 'story' is also quite nicely done - unlike random objectives, which are given to you every few turns and have a time limit, story objectives have no time limit. However, each of the other four main nations will also be trying to complete their objectives, and the country that does them all first wins. This combination means that there is room to take your time, but enough pressure to convince you to keep up a decent enough pace. The challenge then comes in managing everything else - unplanned wars, interventions, invasions... the game doesn't care if you were told to go invade Serbia, so you have to deal with whatever is thrown with you and still complete your main objective.

There are several elements to the typical game - some better than others. The economic portion of the game is fairly poor and limited. Regions have a basic income, which can be slightly enhanced, but the general rule is the more territory the better. You can construct some buildings, but not many, and more often than not you find yourself taking other's peoples anyway. There are fixed cities on the map, although not much can be done with them. There's a technology tree that's spread across several areas - Military Technology, Missile Technology, and then Nuclear, Chemical and Biological research.

Make no mistake, this is a very war/combat orientated game, so much so that non-combat gameplay elements seem very weak by comparison. Diplomacy, whilst it has it's uses, is very limited and pretty much useless, with the war-mongering AI doing pretty much what it wants and there's not a lot of feedback for the player to work with. Even the technology side of things - which is solely military focused, is fairly weak because most of it is devoted to WMD research, which if you sign certain treaties you can't engage in anyway. Missile tech is kind of useful, but you can certainly live without it, which just leaves military tech, and you usually start half way up that anyway.

There are three types of units in the game - Ground, Air and Sea. Sea unit combat is auto-resolved like the good old of days of Total War, and air units (apart from helicopters) are only present in the tactical map as off-map support. As mentioned above, the ground units follow a slightly more complex version of EndWar's Rock-Paper-Scissors deal. Engineers are a very versatile unit used to build what few structures are available, and also defensive emplacements on the tactical map.

The tactical map again has it's good and bad points. Dynamically generated maps means that the terrain is always going be slightly different, even if you're fighting in the same region. There's plenty of terrain features, and even factors like time of day and weather that can affect the battle as well. Turn based just like the main campaign, maps are split up into tiles, and the objective each time is to either capture all of the maps control points (or defend them) and/or destroy all of the enemies units. It's a shame there's not a little bit more variety in the map type, but then the battles themselves can actually be fairly engaging.

The greatest thing about this game is the unit customization - through research, you can unlock optional 'kits' for ground units - for example turning infantry into mechanised infantry, or giving your artillery stronger shells. This means that you can diversify your armies and give you a tactical edge on the battlefield. Think of how Sword of the Stars approaches ship construction - it's a simpler version of that. Given the inherent weaknesses of the technology tree though, this feature sadly doesn't go far enough. Some units have more options than others, and sea and some air units don't get any options at all. Still, it opens up several options for tactical engagements and makes the whole game oddly compelling.

There is a multiplayer element to this game, however sadly it seems that the servers are barren at the moment, and so we were unable to get a game of anything going. Players can play a full campaign against each other, or an online version of the game's skirmish mode. As a general rule, playing against other people always makes things more interesting, however there doesn't seem to be anything especially different about this game's multiplayer to comment on.

A game with a tight focus and some good ideas, Storm: Frontline Nation sadly falls slightly short of victory. The elements that make it unique don’t go far enough, and the lack of decent management and diplomatic areas means it lacks some critical depth. We don’t expect it to reach Paradox-levels of content, but then even the Total War games have a little more substance to them. Still, a respectable strategy game and worth picking up if you fancy an entertaining near-future strategy experience.

The tactical mode at its best can see you using the terrain and your forces to defeat superior enemy. The different unit kits are pretty neat too. 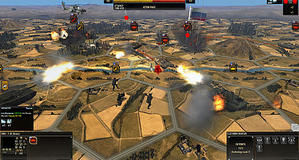 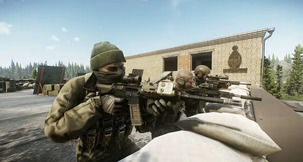 Escape from Tarkov Error 213 - What Does it Mean?