The Girl and the Robot

The Girl and the Robot Review

Originally beginning life on Kickstarter, The Girl and the Robot from Montreal based developer Flying Carpets Games is a fairy-tale inspired action adventure that casts players as both halves of the titular duo as they attempt to escape from their skybound prison.

Liberally drenched in a watercolour aesthetic and charming character designs, The Girl and the Robot certainly looks the part too, partially evoking wistful memories of Studio Ghibli’s older animations (both Nausicaa and Laputa: Castle in the Sky come to mind) and deftly cementing an atmosphere befitting its fairy-tale leanings.

Effectively a game of two parts, The Girl and the Robot has players taking control of both protagonists as they leap about the place solving puzzles and smashing robots to pieces en route to escaping from an evil witch who, you guessed it, runs said skybound prison. On paper, the marrying of puzzle, action and platforming elements should seem like a sound fit, after all so many other games have managed it prior, but yet, The Girl and the Robot finds its pursuit of these ambitions undercut by poor combat and a considerable dearth of polish.

Viewed from the third-person, The Girl and the Robot begins by introducing players to the former as we see the young lass freed from imprisonment and set off on her journey. As the girl, players can clamber over obstacles and crawl through small passages, while the robot is able to fight enemies and use a longbow to hit switches and targets which are far away. Once said robot has been liberated from capture in the game’s first ten minutes, you are then able to switch between characters at the push of a button, or, allow the robot to piggyback the young girl and thus enable both to move at once. It is worth mentioning though that the girl needs to be kept away from enemies at all times, since while the robot is in combat you foes will be trying to capture her and if successful, will bring the game to an end as a result.

Frequently and throughout, The Girl and the Robot forces the player to mix up control of the two to solve problems. One example of this is a conundrum that requires the girl to leap over a chasm to flick a switch that allows the robot to travel up in a lift in order to lay waste to some foes so that they can both proceed on their journey. In addition to such elements, a number of different head-scratcher types such as pressure pad puzzles and block moving puzzles emerge, and while these are things that we’ve all seen before in games of a similar ilk, they’re executed to a decent enough standard here that they remain entertaining. One instance in particular, involved a pressure plate puzzle where depressing the first plate causes a red light to shoot along the floor, except that when you step off it, the light disappears with the goal being to keep the light in play by always having a connected pressure pad in use. 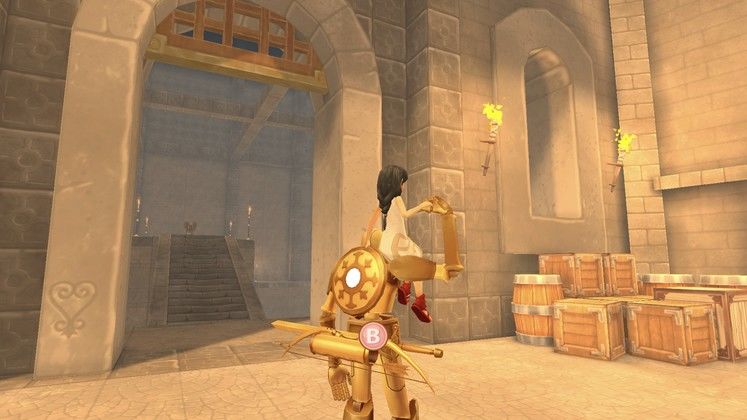 The Robot can carry the girl around the place, thus saving you from having to continually switch from one to the other

Sadly, it’s when we come to the combat side of things that this fairy-tale becomes less of a dream and more of a nightmare. Exclusively the domain of the robot, an equipped sword can be used to hack away at foes, while a shield can defend attacks and a longbow can harass enemies at range; so far, so acceptable. The problem is that the combat just sloppy, unsatisfying and is absent any sort of palpable heft or impact. Watching your automaton clip through enemies and the environment with its distinctly ungraceful strikes while taking an age just to turn around and face your enemies, is quite the chore indeed. As a result of this, it’s all too easy to get boxed into a corner and smashed to death, which when combined by the slow and immensely stiff movement, not to mention the bizarre inability to move while aiming the bow and arrow, it all adds up to make a poor experience even poorer.

Another problem with the combat is the enemies you fight. Predominantly a mixture of robot knights that explode once you’ve chipped away at their armour and landed that all-important kill strike, it’s not unreasonable to say that The Girl and the Robot could certainly benefit from having a much wider gallery of rogues for the player to tangle with, rather than the decidedly boorish group of foes on offer here. One nice touch is that the girl can heal the robot whenever he has suffered damage and is out of combat; expect to be doing this often too as the further you get into the game, the more frustrating and difficult the combat becomes. 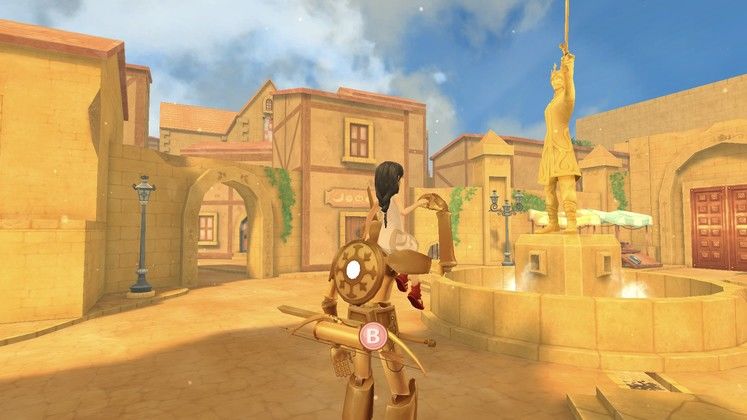 The Girl and the Robot can be a looker at times, it’s just a shame there isn’t more going on in its environments 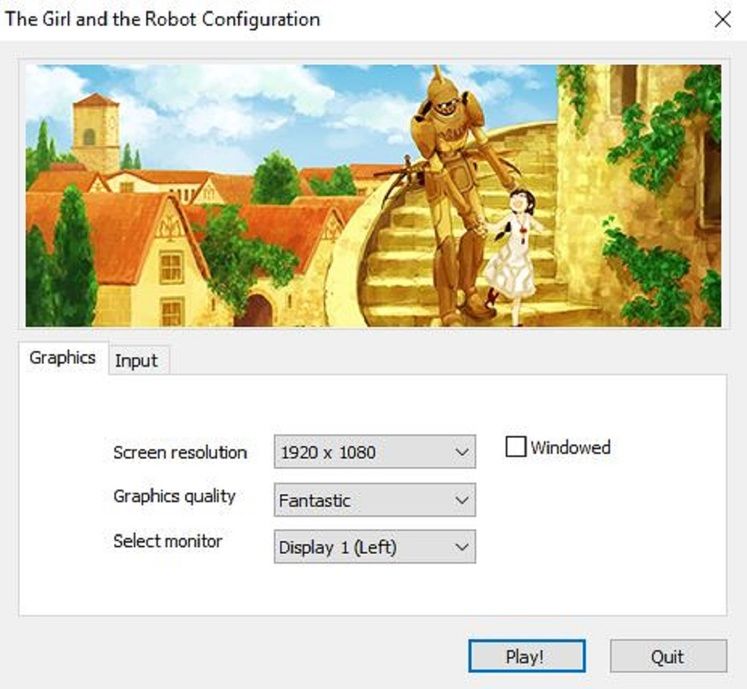 Worse still is the performance. Despite seemingly requiring a very low, entry-level spec to play, The Girl and the Robot mightily struggles to keep the framerate above 20fps when running on maximum detail during large levels. Sure enough, you might well say that the maximum detail setting is where I’m going wrong, but given the general lack of stuff going on in the game’s sparse environments and coupled with the low-quality texture work, I can see no reason for the framerate dipping as low as it does. For reference, the PC that I used for this review was packing in a 2.8 Ghz i5 CPU, 2GB GeForce GTX 670 with 16GB RAM. 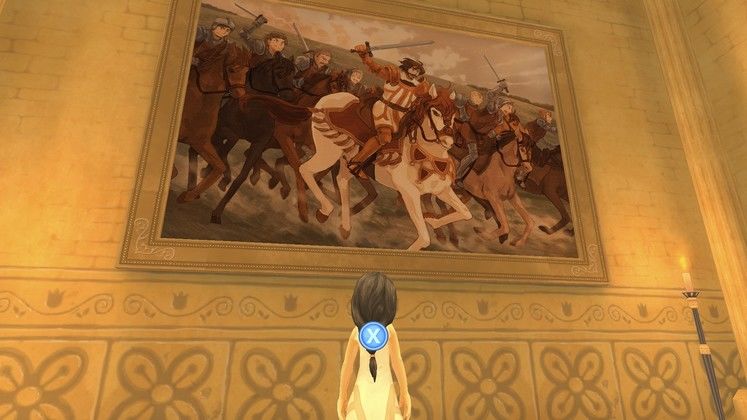 Owing to the desire to impart its yarn through the environment and physical performances within its cut scenes, there’s no voice acting in The Girl and the Robot, so we can scrub that off the list straight away. Sound effects wise though, The Girl and the Robot finds itself most lacking, either because the sound effects themselves are extremely poorly sampled, or, because they just aren’t there at all in any capacity. When we come to the musical side of things, The Girl and the Robot actually acquits itself quite well, because whenever the game’s score does pipe up, it makes good work of cementing the fairy-tale atmosphere with a mixture of relaxing light piano work, and later, some well-played string tunes. 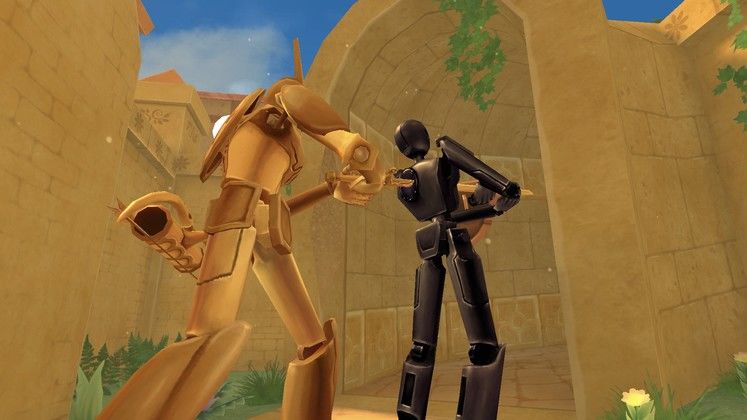 As should be evident by now, it’s clear that The Girl and the Robot suffers from a distinct lack of polish and it’s something that creeps into just about every aspect of its craft. Cut scenes for example, have a split second long black frame inserted every time the camera switches perspective and it’s jarring to say the least, while some animations look strangely clipped, almost as if there are missing frames that needed to be put back in. Elsewhere the environments, though attractive at times, feel far too sparse and while I’m not expecting tons of NPC characters or anything like that, the current gameworld feels more than a little empty; almost as if the game needed a good six months extra in the oven before release. 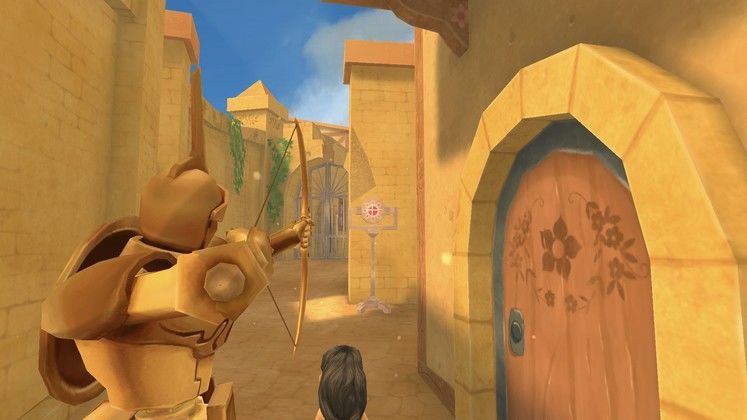 The bow and arrow can be used to trigger switches, as well as lay waste to foes from a distance

It’s a shame that such flaws exist really, because The Girl and the Robot does some intriguing things that make it a compelling prospect. Take how the narrative is imparted to the player for example; in lieu of traditional text and dialogue, the fairy-tale narrative is primarily told through the environment in pictures and inscriptions, and this sort of physical, world-based storytelling is an interesting approach for any developer to take to say the least.

Ultimately, The Girl and the Robot just feels like it needed some extra development time to correct the problems with the combat and the overall lack of polish, since otherwise the rest of the game, the unique approach to storytelling and puzzle elements especially, all hint at a game that could have risen to a far greater calibre than what we see here.

THE GIRL AND THE ROBOT VERDICT

The Girl and the Robot’s interesting take on conveying a fairy-tale narrative is unique and it sits neatly alongside the platform and puzzle-based conundrums that make up the game’s duration. That said, the poorly implemented combat system and a distinct lack of polish both drag The Girl and the Robot far beneath the lofty standard for which it aims.

Top Game Moment: Using both the Robot and the Girl working in tandem to thwart an evil witch and her robot henchman.

The Girl and the Robot Essentials 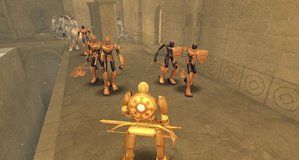