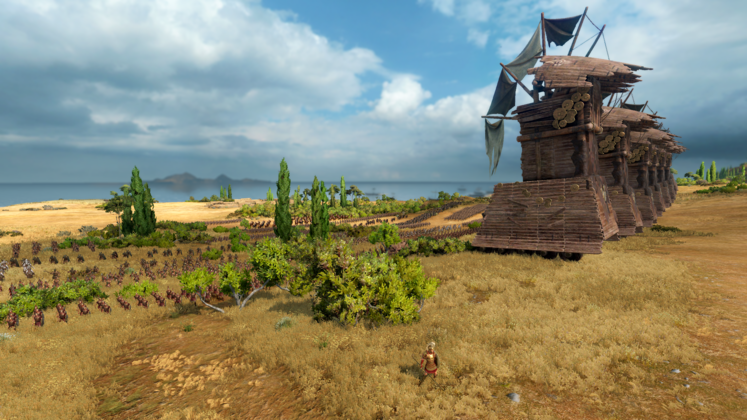 Total War spin-offs are always a complicated idea. Some, like Fall of the Samurai, expand on base game mechanics with a never-visited period such as a nigh-Wild West. Others, like Thrones of Britannia, are made by self-confessed non-Total War veterans that try to do completely new ideas and end up repeating some mistakes that were fixed half a decade ago by previous instalments. And others still, like Troy, try to mix existing mechanics with new takes on the franchise for decidedly mixed results.

Taking place roughly 12 centuries before Christ, Total War: Troy depicts the Peloponnesian conflict that pitted the kingdoms of Greece versus the might of Troy. As Homer’s Iliad described, Paris of Troy kidnaps Helena of Sparta, wife of the King Melenaus, when the two fall in love with each other. Helena leaves Melenaus and their nine-year-old daughter Hermione behind, triggering the Spartan King to reach out to his elder brother Agamenon and unite the kingdoms of Greece into a sea-crossing campaign to siege Troy and bring back Helena. 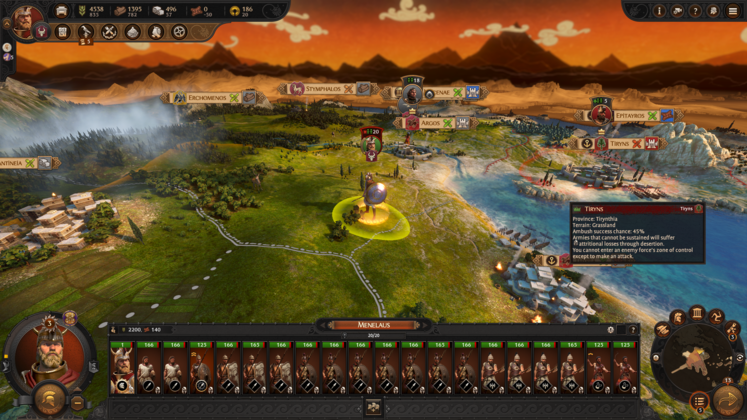 “But wait a minute,” I hear you saying. “Wasn’t Homer stories full of mythological elements? I thought this was supposed to be a historical Saga game.” Well, you are right, my dear hypothetical imaginary person – Total War: Troy is supposed to be a historical game. The problem is, the history of Ancient Greece and the Trojan War themselves are very mythological, leaving the developers with an issue – how do you make a historical game of something mythological, especially when you don’t really want to make it realistic? The answer is: you don’t.

Instead of following Three Kingdoms perfect precedent and adding both a fantasy and a historic mode, Troy tries to split the difference. Yes, there are heroes capable of taking entire platoons single-handedly, and there are gods that love or hate your guts and interact with your campaign/battles, and yes, there are superpowers you can activate mid-battle like magic spells. But this is supposed to be a historic title, dammit, so Troy draws the line on the monsters. Never mind the sirens – they’re just beautiful ladies in togas wielding swords. Never mind the Cyclops, he’s just a big dude wearing a mammoth skull as a helmet whose nose-hole makes it look like he has one eye if you squint really hard from a mile away. And never mind the actual Trojan Horse – they are just big siege towers shaped like horses because… reasons? 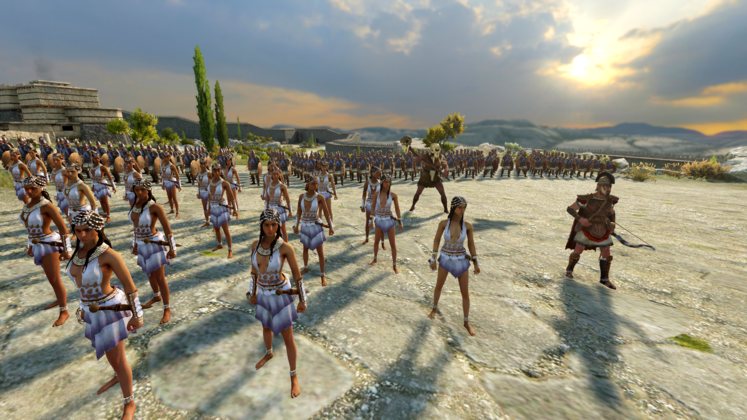 As a result, Total War: Troy is a bit disjointed. The game cleverly allows you to play as heroes from both sides of the conflict, such as Achilles – whose ego affects his entire faction and can never ever lose duels as long as they happen off-screen – and Menelaus – who can recruit units from other Greek factions and magically colonise every ruined settlement not in the fog-of-war – in the Greek side, versus the Trojan brothers, which share a “daddy issues” bar where they must keep their father happy and proud of their deeds. Each faction has its unique units, bonuses, and starting locations, in true Total War style, but it feels weird to have a game about slowly conquering the Peloponnesian over 150 turns when the whole gist of the Trojan War was them sailing almost in a beeline towards Troy.

The heroes themselves are an interesting proposition, leading their army in Warhammer/3K style and slowly levelling up and unlock very boring number-based upgrades. During battle, they gather rage to execute magic attacks abilities such as debuff of enemy units and special powerful attacks, with an ultimate ability that gives them a temporary super buff but can only be used once per battle. For reasons unknown, CA Sofia thought a game all about heroes based on a book all about heroes duelling each other couldn’t benefit from the hero duelling system introduced in 3K, so Troy instead falls into the same boring slog of Warhammer where heroes try to stab each other and miss, with one of them running when routed as the other pathetically fail to land a hit try after try. 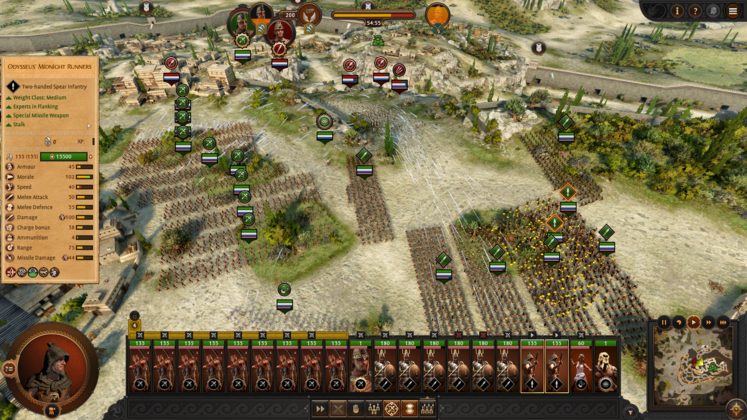 The actual units don’t fare much better – thanks to the game using the same math-based battles of Warhammer and 3K instead of the beautiful physics system of Rome II, battles in Troy are a pain to play and even more painful to watch. Three thirds of infantry often fail to engage as only the first lines get into the fray, while ranged units refuse to all fire on people in their line of sight because a pixel of their selection box is intersecting with another unit. All troops take forever to move through other formations (instead of navigating between them like real people do), while cavalry – which aside from centaurs (who instead of wise forest sages are now just normal dudes in horseback) virtually don’t exist – freeze the moment they contact an enemy line during a charge, completely failing to do that real life thing that cavalries do where they cleave through several lines of enemies with speed and sheer power. To be completely honest, I didn’t really expect Creative Assembly to finally fix their battle system that’s stuck around for so long, but it’s still a disappointment.

The campaign, however, has been significantly changed by the idea of resources. Gone is the simple “credits” system that previous TW relied on, where every trade commodity, industry, and taxes translated to “money”. Now, you have actual resources, including food to recruit units, timber and stone to build buildings, and metals to get advanced features. Trade agreements are no longer magic money deals, either – you now need to actually send specific materials in exchange for different resources, adding a big layer of Paradox-like micromanagement that me, as the time-travelling god entity controlling a Greek king really don’t want to have to deal with. 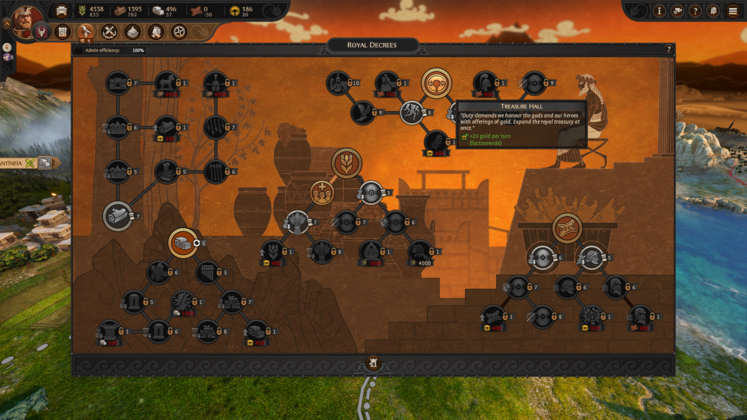 Still, the game has some highlights – sieges are the Rome II/3K kind instead of those horrendous Warhammer versions, and the graphics are actually quite nice; Troy uses a beautiful campaign skyline based off Greek vase paintings, full of mountains and clouds, and has a nice burning ember effect whenever you clear a section of the fog of war. Neither are enough to fix the game’s actual gameplay problems, but they are still rather pretty.

But in the end, Troy feels very similar to Thrones of Britannia – a capable entry that doesn’t really succeed in capturing veteran players like me, mainly due to an unengaging and unadvised change to some core game mechanics. Some changes, like the ones 3K did (including changing population surplus to population numbers like 130,000 people instead of “3”) actually add change the gameflow, while games like Troy seem to make bad changes and not carry over some of the biggest improvements the franchise made over the years (Britannia famously didn’t carry over Marching stance, which single-handedly ruined nearly every operational campaign move in existence). 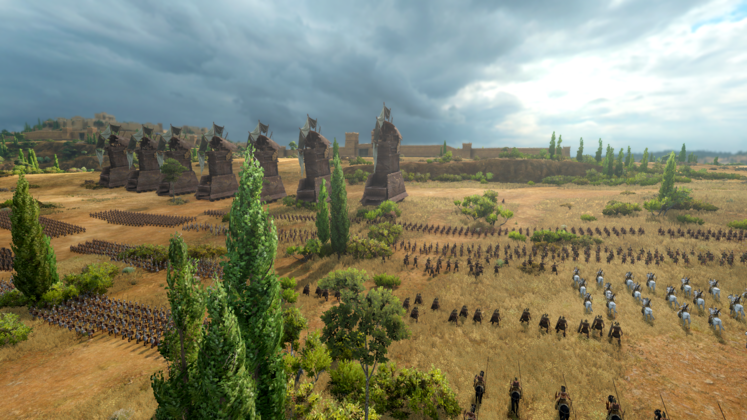 But my biggest issue with Troy, hands down, is just how wrong everything is. Forget any of the fascinating, vaguely Bronze Age historicity of the Trojan War, and forget any of the fantastic, awesome stuff in the Iliad – everything in Total War: Troy is weirdly the worst of both worlds, a mix-match of bad decisions that never fully owns its mythological sources or its historical origins. The lack of duelling system in a game about heroes, the horribly generic and disappointing “mythological” creatures, and the general sameness of the battle and siege mechanics underneath just combine to create a game that is literally the definition of a spin-off – a side detour that adds nothing to the series, and instead just sidesteps the franchise into a direction that doesn’t move it forward in the slightest.

Total War: Troy makes some curious changes to the Total War formula, but the less streamlined resource system, extra micromanagement, and weird mix of reality and mythology work against its favour to create a less than entrancing experience.