For those who aren’t in the know, developer Rodeo Games has made a name for itself in fashioning polished, generally decent turn-based Warhammer titles for mobile platforms. The most recent of these, Warhammer 40,000: Deathwatch, finds itself ported to PC in enhanced form in an attempt to keep the nightmarish spectre of yet another shoddy mobile to PC conversion at bay. Happily then, I can report that not only is Deathwatch that rarest of beasts – a great mobile to PC port, but more importantly, it also happens to be a superb turn-based strategy effort in its own right too.

Pitting squads of Space Marines against franchise favourite beasties the Genestealers in addition to the newly emergent Tyranid menace, the scenarios that Deathwatch thrusts upon the player should be somewhat familiar to Warhammer stalwarts across the game’s forty or so mission long single-player campaign. For the uninitiated or the rusty of battle however, a well-constructed prologue manages to affect a decent juggling act, doubling as both a deft narrative introduction and an effective tutorial. 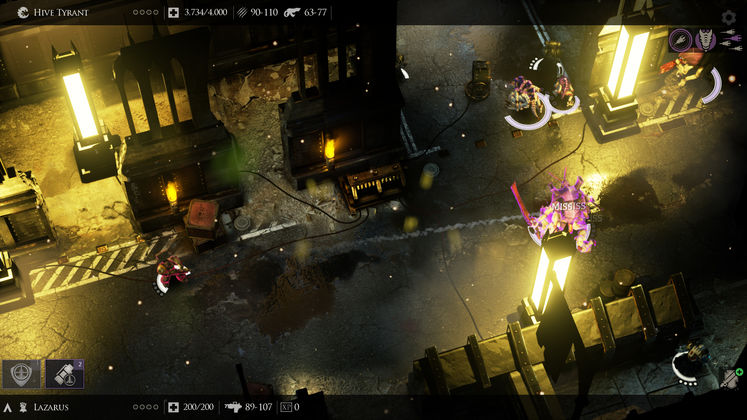 Into the game proper, Deathwatch presents another concept that will be familiar to Warhammer 40K strategists – namely Action Points, or ‘AP’. As seen in the likes of Space Hulk and other turn-based entries in the franchise, AP is spent on getting your marines to do just about anything. From moving about the place to unleashing a hellacious barrage of hot lead in the face of whatever ugly prat is stood in front of you, AP is essentially currency in each of your tactical transactions within the game. As such, AP needs to be carefully measured lest you end up with none of it left and powerlessly surrounded by a bunch of dudes who want to punch a hole in your face and steal your lunch money.

One of the interesting aspects of how Deathwatch handles AP in regards to its peers is that it isn’t terribly draconian about the whole thing. Turning for example, doesn’t cost any of these coveted Action Points while penalties for other events such as unjamming weapons are also mercifully absent; even though I realise that their omission might rankle among the higher echelons of the 40K fan-base who might be looking for a more unforgiving affair.

Compounding the use of AP is the notion that certain weapons and actions require higher amounts of it to be carried out. Devastator units for example, with their hefty alien monster shredding heavy weapons, take two AP to carry out a firing command rather than just a single point. Because of this, the individual AP needs of each soldier under your employment must be considered since AP is also crucial for another Warhammer 40K mainstay; the Overwatch ability.

Yep, this being a game with Space Marines in it, the trusty Overwatch ability comes into play pretty much right away; allowing you to have your trusty squad members stand sentry on zones where enemies are fired upon should they be foolish enough to enter. This allows you to construct effective choke point and crossfire strategies as you pre-empt onrushing enemies with carefully designated corridors of fire.

Going back to the notion of AP, the effectiveness of the Overwatch ability (other than the AP cost it requires to activate in the first place), is in how many of those precious points you have remaining after you engage Overwatch. You see, each time that a unit opens fire on an enemy in Overwatch, a single point of AP is depleted meaning that if you have multiple foes incoming and not enough AP to deal with them all, you can reliably expect your defensive line to be broken and your foes to pour on through without harassment.

What all this means is that Deathwatch’s brand of turn-based strategy shenanigans ends up being horrendously entertaining and satisfying, with each covered corridor and each downed enemy feeling almost as much of an achievement as completing the mission itself. Speaking of the missions they’re a varied lot, running the spectrum of traditional seek and destroy sorties through to defence objectives, object retrieval and a great deal more besides. 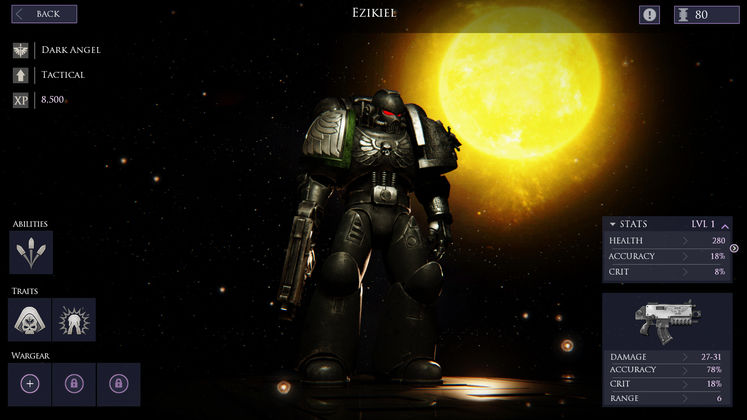 Though if there is one complaint in regards to Deathwatch’s campaign, it’s that the size of the sorties feel much more smaller in scope than the massive, sprawling encounters that PC Warhammer 40K fans might be used to. It’s ostensibly a holdover from the game’s mobile origins, but still, the reduction in width and breadth of conflict remains notable all the same.

Framing these missions is the game’s plot which follows the familiar Warhammer 40K narrative of “everything’s gone to pot, so let’s go and sling a load of armoured power suits on a bunch of genetically modified psychos and send them off into battle.” In all fairness though, the story of Deathwatch is straightforward enough that the game doesn’t need to fumble about with clumsy exposition; with a mixture of brisk mission briefing voice overs and dependably descriptive, though not exhausting, walls of text doing a decent, if not spectacular job of setting the scene.

By far the highlight though, is the hyper macho banter that frequently breaks out amongst your troops. Your squad, you see, is actually a hodgepodge of Space Marines from various different galactic chapters such as the Blood Angels and Space Wolves to name a couple. As one might expect then, they often don’t get on and the result is some frequently entertaining verbal machismo that provides some refreshing levity as it neatly juxtaposes against the grim carnage unfolding around them.

If Deathwatch nails the in-game strategy and setting well, then so too does the game also do a bang up job with the character progression side of things. At the conclusion of every mission copious amounts of experience points are doled out based on the number of enemies killed and objectives completed. Once accrued, players can choose to pile these points into purchasing new abilities and traits, or, increment their health, accuracy and critical damage stats.

Also handed out at the close of each mission are requisition points. Rather than being invested directly into your character, these points can be used to purchase Wargear card decks that contain up to three random items. Including such things as better quality weapons and, on occasion, superior quality squad members, the feeling of elation when you level up a marine is matched only by the thrill of getting a trio of cards that really bolster the fighting capability of your squad.

Brilliantly complimenting the experience and requisition point system is the fact that there is no permadeath in Deathwatch. A bold departure from the punishing status quo established by such genre peers as XCOM, Rodeo Games take on the mortality of your units is such that when they die, they simply lose all of their banked experience rather than being lost forever – something that becomes a real pain later on when you’ve been saving for a particular ability for a good few missions only to have all that progress flushed down the loo.

The great thing about this though, is that it introduces a brilliant risk and reward dynamic as you find yourself consistently weighing up whether to spend your experience points or hold onto them for a later date; knowing that you might well lose them if proceedings go south. 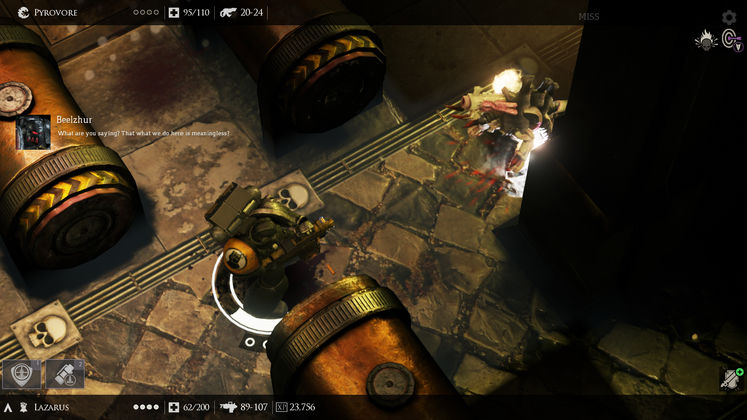 In making the leap from mobile to PC, Rodeo Games has included a number of improvements to make PC folks feel that little bit extra special. Chief among these is the notable uptick in visual splendour that the developer has afforded this enhanced version of the game. Although Deathwatch was originally developed on Unreal Engine 4, it’s really with the game’s transition to the beefier hardware afforded by contemporary gaming rigs that its visual aesthetic can now really shine. Generously draped in great lighting, real-time shadows, highly detailed units and reflective surfaces that show shimmering images of your legion as they strut past, it’s reasonable to say that this is the best top-down Warhammer 40K strategy has ever looked.

Another element that often tends to be short-changed when a game is ported from mobile to PC, is the interface. Luckily, Rodeo Games have sidestepped this common pitfall by reworking the UI for this newest version of the game, with clear, uncluttered menus and easily navigable interface icons making commanding your legion both easy and a pleasure to control.

A great improvement over its humble origins, Deathwatch’s engaging tactical systems and great progression elements also serve to highlight the odd fact that the next essential Warhammer 40K strategy title isn’t a homegrown PC effort at all but rather, one born in the often reviled realm of ultra-casual games and microtransaction misery. If you have any prejudices about mobile games, look past them and get stuck in – Warhammer 40,000: Deathwatch Enhanced Edition is the real deal.

Locking down an entire area in Overwatch mode while other units flank key enemy positions. 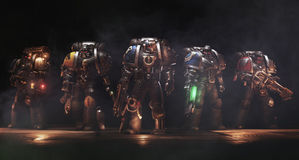 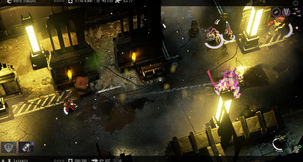