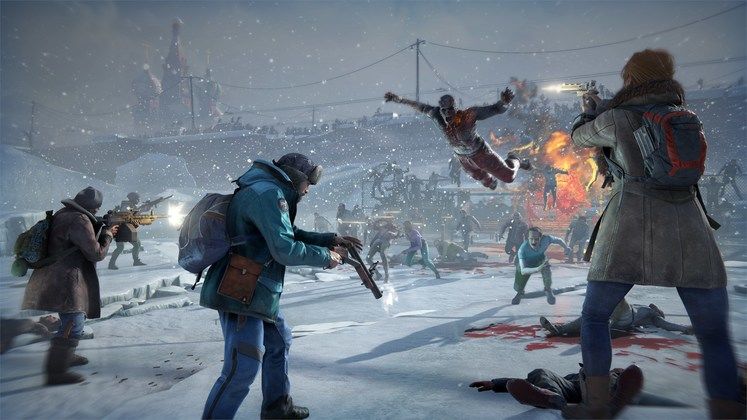 I never been a big fan of zombies. The original Romero idea of bumbling, slow, flesh-eating walkers is still my favourite, but I never bought the idea they could really trigger a worldwide apocalypse unless every single corpse came back to life like in the original Night of the Living Dead. World War Z’s zombies are a bit different, however. They’re rushing, ravenous, mindless beasts with no thought to self-preservation, slamming into each other as they run, climbing on top of others to reach high places, and flinging themselves off buildings in senseless attempt to reach something far away. They’re fast, numerous, and single-purposed, understandably capable of taking over whole cities – and overrunning entire continents in the process.

World War Z – the game – draws from World War Z – the movie – for it’s setting and premise, depicting four different groups of survivors fighting against the unstoppable tide of flesh and teeth that’s threatening to wipe out human race. Set in New York, Jerusalem, Moscow, and Tokyo, the coop shooter tasks up to 4 players with surviving the plague while accomplishing different objectives, from defending an area long enough to a bus full of civilians to escape to rushing around a factory activating switches to release a neurotoxin that kills zeds (WWZ’s shorthand for zombies). 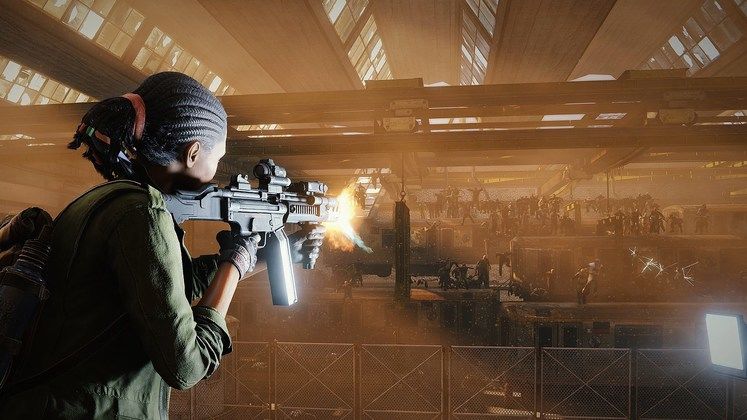 Unlike the movie’s depiction of the start of the outbreak (or the book’s vast geopolitical series of accounts of the entire Zombie War), the game restricts itself to 11 missions set during the immediate aftermath of the initial epidemic. Each level takes place in different locations and feature their unique cast of named and fully voiced characters, with a series of different objectives and level design that keep the team constantly on the move. There is very little – if any – backtracking involved, resulting in engaging runs that often feel like much more than just running around shooting at enemies.

The shooting itself feels amazing, thanks in huge part to the behaviour of zombies. From slowly shambling untriggered zeds to rushing, screeching, coming-for-you ones, they have a physical presence that puts Left 4 Dead’s zombies to shame. Even so, it all pales in comparison to the set piece hordes, where hundreds of zombies start rushing down towards you like a wave of death, falling down buildings, shaking cars as they run over them, and slamming into each other as streams collide. They quickly pour in like water in a bucket, saturating the area and forming a pyramid in attempts to reach high places – which when shot at the base, causes the whole group to topple and collapse onto each other. The presentation is especially awesome, with smart use of lightning and level design to maximise the audiovisual impact of the moment; Saber Interactive got the swarm movement of zombies downright pat, and the truth is World War Z is an amazing sight to behold. 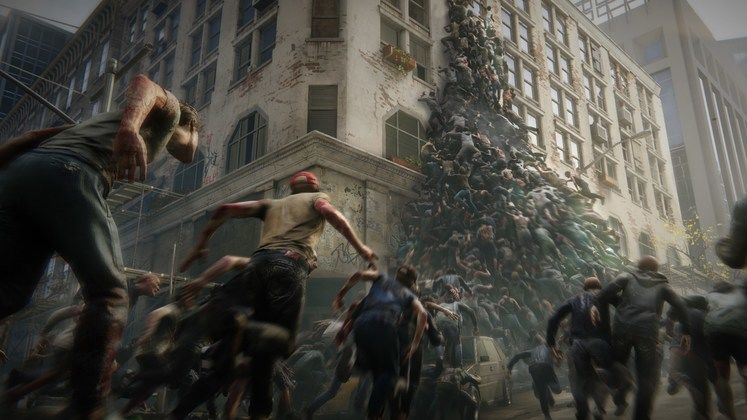 Unfortunately, all of that happens in specific set points in each mission, and that tailored nature of the mission flies straight into the face of the nature of the game as a whole. Coop shooters of this kind tend to rely on replay value, meaning dialogue and plot often loses its value and impact on repeated outings. In fact, they often become grating, and having to stay in place while listening to the same 35-seconds-long dialogue for the 12th time you run a mission quickly becomes extremely tiresome. The low amount of maps also don’t help, since every mission always develops the same way and quickly puts a damper in replaying the same levels shortly after completion.

On the plus side, the game does feature a comprehensive system of classes and weapons, allowing players to take medic, support, tank, or damage roles at will. The perks themselves start slightly underwhelming, but quickly become important – the medic’s ability to use medkits with a 25% chance of not consuming them is one terrific boom when it does trigger. Weapons are slightly less well developed, as WWZ does feature a vast upgradeable arsenal of them, but pigeonholes choice – every class starts with a shotgun, SMG, or scout rifle in addition to a pistol, and any desired alteration forces you to find them during a level or unlock them with a perk. There’s only a handful of selectable perk weapons, and given you can only have one perk from a column equipped at a time, changing your starter gun means you’re giving up a potentially unique life saving effect for something anyone can find in a mission. 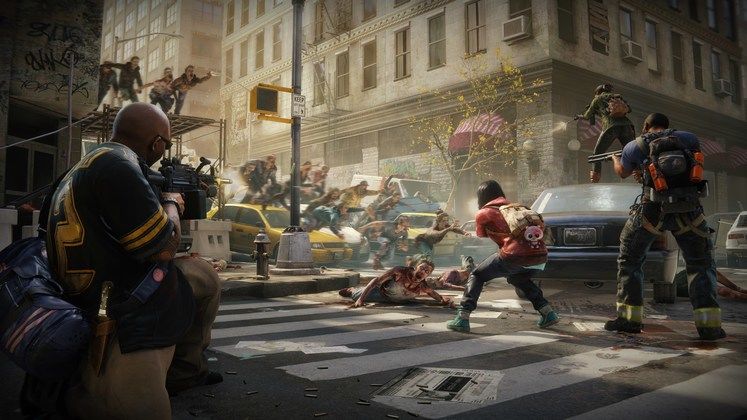 The upgrades themselves are a bit of a mixed blessing. You level up weapons by using them to kill zeds, and you can buy a level 3 upgrade without spending money on the level 2. The game seems to recognise the fact mid-tier upgrades are virtually a waste of valuable currency due to their diminishing-returns-yet-highly-exponential-cost and thankfully allows you to bypass useless steps, but it also means weapon upgrades feel slightly worthless – not only most of the upgrades are an irreversible waste of credits, but they most likely are upgrades to a weapon you won’t be able to equip 90% of the time.

The game is surprisingly good from a lore perspective, featuring strong writing that makes the little memos and character videos very enjoyable to watch. It fills in the blanks with nods to the movie and book alike, like a memo from China mentioning the whole of North Korea has apparently retreated into underground bunkers, and overall makes me sad that more effort wasn’t put into the narrative. Instead, we get six or so multiplayer non-coop modes that are so generic they might as well not exist – I would much rather have more of the coop campaign than all the effort wasted into segregating the community with mindless PvP. 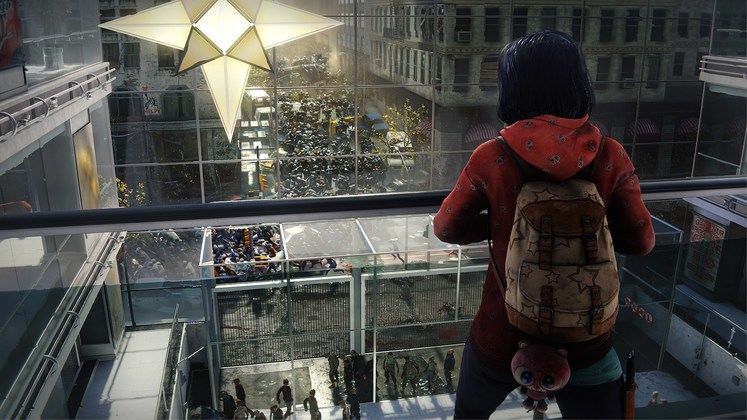 From a technical perspective, I didn’t ran into many bugs. The biggest issue was by far Epic Store’s capabilities – and the first example I think the lack of Steamworks and Steam Interface and Friends List may actively harm a game. Epic Stores lacks an in-game interface and has an atrocious client interaction, meaning WWZ uses its own servers and in-game party system to invite friends. During my time with it, I was able to both find full groups and never had anyone join me multiple times, and barely a couple of days went by without server issues preventing me from playing the game for half an hour at a time. The reliability and convenience of Steam’s already established services is extremely important for games like this, and the fact most don’t have a big Epic friends list and can’t easily call anyone they do have may be prejudicial on the long run.

On that topic, Saber’s interface is also in heavy need of work. The game lacks any options when it comes to matchmaking and sessions, to the point the “preferred character” option is literally useless and that the first few missions I ran in the game dropped me mid-session (often the last battle) more times than not. It took me about 3 hours of gameplay to realise that all episodes have an intro cutscene and some missions are not only 3 minutes long, as the game constantly would dump me unceremoniously in the end of a level I had never played before. The ability to host your own missions or choose to join only lobbies/mid-progress is essential, yet Saber neglected to include them and forced you to rely on luck to attain any modicum of control over your playing preferences. 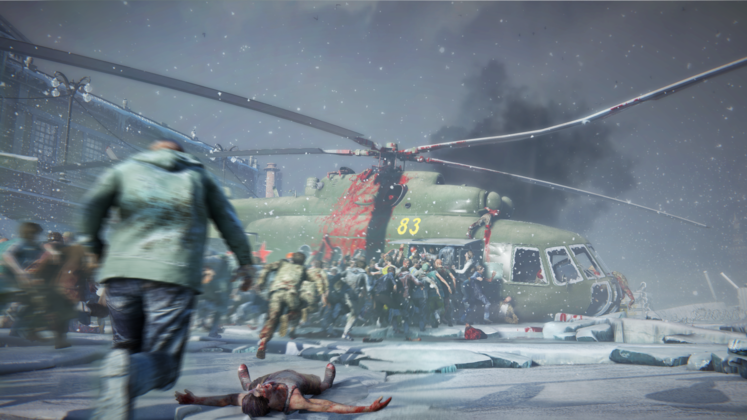 Finally, the game has some issues with gameplay mechanics and interface in general. The game never explains to you that X swap shoulders, that you can only have one perk of a column active at a time, or what exactly your special class abilities do. Some items, like medpacks or stim shots, require contextual buttons and are surprisingly obtuse to use – in order to heal or boost someone, you need to either chase them around until the prompt appears or they need to be stationary, which leads to very frustrating moments mid-battle. Left 4 Dead already had a left click for self/right click for teammate mechanic for a decade, so I have no idea why the developers tried to reinvent a wheel that already spun flawlessly around its axis.

In despite of all this, World War Z is a surprisingly good game for a licensed title (can we even call it tie-in 6 years after the movie came out?). It is a squarely A product, being far above indie capabilities but lacking the polish and breadth of content to classify as AAA. The hordes and defense sections are frequently the highlights of each episode, and I only wish they were more frequent/natural in occurrence and deployable defences more widespread in implementation. As it stands, however, World War Z is a great coop zombie shooting game, and with continued support it has the potential to surpass Left 4 Dead as one of the greatest in the genre.

Watching a gigantic horde of zombies run across an overpass, pour into the streets below, fill in two whole avenues, and still have hundreds of zombies coming up behind it.