Civilization IV: Beyond the Sword Summary

Civilization IV: Beyond the Sword Review

Videogame legend Sid Meier promises that for "as long as fans keep asking", the Civilization series will keep on releasing for PC. It's gone console, mobile and social.

The long-running IP has "roots in PC gaming" and won't neglect them. Meier would also "love to make another version" of Alpha Centauri but they don't own it.

Civilization IV: Beyond the Sword Essentials 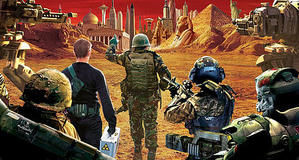