Meet Charlemagne, the most influential Frank in history. With the possible exception of Sinatra and Zappa.

Paradox Interactive Halloween Sale - All Treat and no Tricks!

Paradox Interactive's Halloween sale has begun on their store and there are some bargains to be had.

Path of Exile expansion The Awakening drops on July 10

Grinding Gear Games has announced that The Awakening, the biggest expansion yet for its free-to-play hack and slasher Path of Exile, will be released on Friday, July 10, after a relatively brief Beta testing period.

The expansion adds an Act Four storyline, wrapping up the game's main plot, as well as "new areas, monsters, six boss fights, five previously unannounced skills, 13 end-game maps, two challenge leagues and a climactic multi-stage encounter with Path of Exile's new end boss!" Crikey, that should keep you occupied for a while. 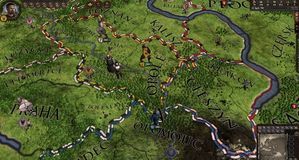