Dusk is the awesome FPS successor to both Quake and Blood, and a potential GOTY candidate. There are three hidden levels in the game, and we'll show you how to unlock all Dusk Secret Levels.

DUSK, the spiritual sequel to Blood, will release on January 11

DUSK, The new FPS made in the style of classic FPSs like Blood, Redneck Rampage and Duke Nukem 3D will get Episode 2 and an Early Access release in January, with the final version due early 2018.

If you're a fan of old FPS games you might be interested in Dusk, a new retro-style FPS game that promises to drop sometime in 2017. Dusk is inspired by games such as Doom, Quake, Blood, Heretic, Hexen, Half-life and Redneck Rampage with more than enough bloodshed and gibs to live up to those titles. 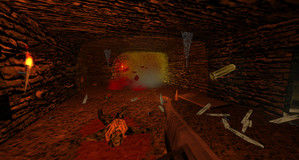