Dust: An Elysian Tail coming to Steam on 24th May

Humble Hearts' intricately hand-painted Metroidvania-style game Dust: An Elysian Tail will be debuting on Steam on the 24th May, according to the developer. The game does not have a Steam page yet, however.

This year's Summer of Arcade for 2012 was the worst-selling promotion in its history, dating to 2009; 2008 was the first Summer of Arcade, but sales figures weren't released at the time.

Microsoft director of programming Larry Hryb has announced the release dates and prices for the upcoming Summer of Arcade 2012, showcasing some of the major Xbox Live Arcade games for the Summer.

Microsoft has revealed the five games that will be a part of its yearly Xbox Live Arcade Summer of Arcade showcase, which will include Hybrid, Deadlight, Tony Hawk's Pro Skater HD, Wreckateer and Dust: An Elysian Tail. 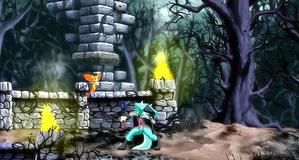