Focus Home Interactive has announced that the 2.5 side-scrolling shooter Final Exam is now available for PC on digital distribution, and landing on Xbox Live Arcade and PlayStation Network on Friday, 8th November.

Developer Mighty Rocket has announced that they have changed the name of their sidescrolling shooter Obscure to Final Exam, chiefly because it's not a real sequel to the Obscure series.

They've got everything from farmers to generals...

Uncharted, Dead Space, Resident Evil - those are all big boy IPs, and they are all "obliged" to have big success. That's a problem for innovation, explains Francois Potentier from Obscure's Mighty Rocket Studio.

Being a small and nimble studio without huge demands placed upon them by fans, they can create things that are wackier and a lot more experimental. Success carries a high creative price. 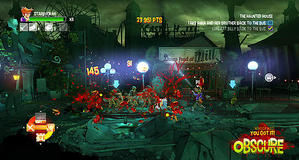