LEGO Pirates of the Caribbean: The Video Game Latest Updates

A few days ago, GameStop revealed that a new DLC pack, "Lost Archive", was being released for Assassin's Creed: Revelations on the 28th February. The Major Nelson blog has confirmed that UbiSoft's unannounced downloadable content will be coming to Marketplace on that date.

Major Nelson also revealed that a FIFA Street demo will be hitting on the 28th as well.

Bethesda and id Software's apoco-shooter Rage has been kept away from the UK all format chart crown by EA Sports' FIFA 12, which stays numero uno.

Do I really need mention Zumba? Didn't think so. LEGO Pirates of the Caribbean is having a jolly roger of a time 2nd place, keeping its spot for another week.

LEGO Pirates of the Caribbean: The Video Game Essentials 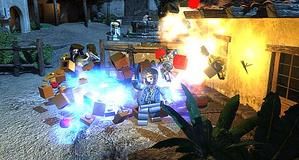