Lords of the Black Sun Summary

First major update released for Lords of The Black Sun

Developer Arkavi Studio has released version 1.03 of its space 4X strategy game Lords of The Black Sun, with the first out of Early Access patch designed to improve both basic stability and overall game balance.

It's harder to cheekily bankrupt your alien foes by constantly conning them with loans, for example, and a couple of the game's races have been given better tech to make them trickier to defeat.

The space 4X Lords of The Black Sun from developer Arkavi Studios and publisher Iceberg Interactive is finally ready to conquer the great expanse over our heads as it leaves Early Access on Steam.

Formerly known as Star Lords, this space 4X has 8 races with tactical turn-based combat, and promises espionage, intel and diplomacy with a complex AI. Tech trees are randomised.

The Steam Early Access build of Star Lords has been given a new big update with developer Arkavi Studios including a new game creation screen, which has been improved with less clutter and better organisation.

In the Shadow of Orion

Joe Robinson talks to Iceberg's CEO about how they've become the champions of the space 4X genre. 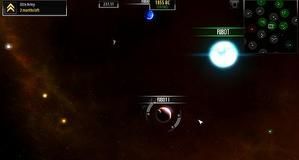