The final single player downloadable content pack for Mass Effect 3, Citadel, is coming out tomorrow on the 5th March, and the launch trailer will bring a tear to fans' eyes as they are given one last chance to spend time with friends and romantic partners from the previous three games.

Electronic Arts and BioWare have announced the final single player downloadable content for Mass Effect 3, which will round out Shepard's life, allowing players to explore more of the Citadel and reconnect with the characters from the entire trilogy. 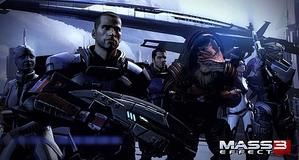