While EA Sports' FIFA 14 may have kept the crown for another week in the UK all format chart, Rockstar's Grand Theft Auto V after just three weeks on sale has blown past lifetime sales of its predecessor.

2K Sports has finally revealed a new television spot showing off the next-generation version of NBA 2K14 (specifically, the PlayStation 4 version). According to the developer, the spot shows off "actual Next-Gen NBA 2K14 game footage with variable camera angles."

2K Sports has released the first screenshots for the latest edition of their premier basketball game, NBA 2K14, which is being released for PC, Xbox 360, Xbox One, PlayStation 3 and PlayStation 4.

Sony has announced in a press release that the PlayStation 4, as first revealed at GamesCom 2013, will be launching on the 15th November 2013 in the US and Canada, and will be released to select countries worldwide. 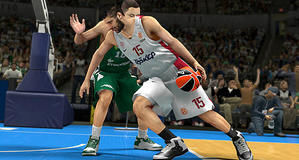