When it comes to renegade scum, Chris Capel is the scummiest around..

Avalanche have "put on ice" a steampunk project, will make it "sooner or later"

Christofer Sundberg from Avalanche Studios, developer of Just Cause and Renegade Ops, has said his recent teasing images via Instagram were of a "steampunk-style game" they had in mind.

Of course in the next breathe he then proceeds to rip our steampunk loving hearts out by declaring it 'on ice', until further notice. Being an independent studio at least means they can revisit it.

Avalanche: Triple-A "a stamp of quality," not just big budgets and risks

Christofer Sundberg, co-founder of Avalanche, says there are different definitions for 'triple-A'. Most assume it's to do with "big budgets and huge risks," but for Sundberg it's a "stamp of quality."

The Just Cause developer says you "don't have to develop, bigger more expensive games." It's a matter of priorities, he notes, saying you can just "make better games." Bigger isn't always better.

Avalanche: PlayStation 4 will "out-power most PCs for years to come"

Just Cause and Renegade Ops developer Avalanche Studios is very pleased with Sony's decision to include a beefy 8GB of RAM in their latest PlayStation designs. The PS4 will "out-power most" PC rigs.

Specifically it's the 8GB GDDR5 RAM that's packed into the AMD APU, which combines CPU and GPU into a single chipset. This tech will likely stay ahead of the majority of PCs "for years to come."

Sony has announced the European PlayStation Network released for this week, and it'll include full game releases like NHL 12 and PSN releases like Doc Clock: The Toasted Sandwich of Time and The House of the Dead 4. Other content releases include the major UEFA Euro 2012 expansion for FIFA 12.

Avalanche unveiling new game at E3, not Just Cause or Renegade Ops

Just Cause developer Avalanche Studios will be pulling the sheet off a new project this E3 for fans to feast their eyes on, but it isn't a Just Cause or a Renegade Ops sequel.

It's a licensed property but not movie-based as they "aren't particularly interested" in that field, says CEO Christofer Sundberg. Tie-in's make for "crappy games" overall. 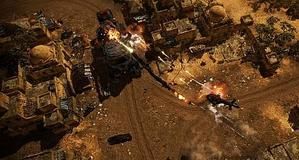