The addition of the Romulus race is almost upon the Star Trek Online community as Perfect World begins pre-patching through the MMO's launcher. The next expansion officially releases May 21st.

It lets you create Romulan characters in all-new story-driven missions. This also adds Warbird Class starships to captain. There are also new improved traits and an improved UI.

Perfect World has announced the pricing for the upcoming Legacy Pack that will be coming with the Legacy of Romulus expansion for Star Trek Online.

Cryptic Studios has announced that the next major expansion for their licensed MMO Star Trek Online will be Legacy of Romulus, which will finally add the Romulans as a playable faction. The faction will get the mighty Warbird class ships, while Denise Crosby will be reprising her role as Sela, who is now the Empress of Romulus. 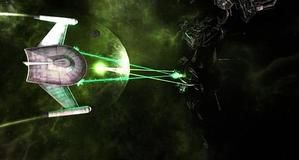