Tesla Effect: A Tex Murphy Adventure pushed back to May for extra polish

Throwback adventure game Tesla Effect: A Tex Murphy Adventure will now launch on May 7 for PC and Mac, according to a developer video released yesterday.

Although the team at Big Finish Games had planned to launch April 22, they decided to push the sci-fi detective title back a couple of weeks in order to add more polish to the game.

Tesla Effect out April 22, pre-orders detailed by Tex Murphy himself

Tesla Effect: A Tex Murphy Adventure is coming out April 22 on Steam and GOG, and developers Big Finish Games have released a new video with Tex himself, actor and game designer Chris Jones, talking pre-order goodies.

The successfully Kickstarted adventure game, Tesla Effect, the sixth Tex Murphy episode in the series, has a new trailer that was debuted at the Salt Lake City Comic Con, featuring old-school green screen FMV gameplay, and cameos by such personalities as June Lockhart, Todd Bridges and a cameo by Mystery Science Theater 3000's Kevin Murphy.

Tesla Effect: A Tex Murphy Adventure, which had been Kickstarted as "Project Fedora" back in June 2012, will be published by Atlus, and will be getting a release early next year. The game is the sixth game in the science-fiction comedy adventure series, and will be the first game in the series since 1998's Tex Murphy: Overseer.

The long-awaited return of Tex Murphy has been finalized as Project Fedora has hit its Kickstarter goal with a few days to spare. Gamers interested in backing the game in the next few days can donate at the official Kickstarter page here. 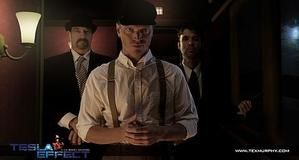